My husband's maternal Grandparents were both Spaldings.  Mark Thomas "Marky Tunk" Spalding and Cora Lou Spalding were second cousins (possibly half second cousins).   Both were a great grandchild of Richard Augustine Spalding, but they may have had different great grandmothers.

A short summary of Mark Spalding's direct line of ancestry as I have it is:


"Joe Tunk" Spalding  Born March 14, 1858, died January 6, 1945 at age 86.  He lived in Calvary, Marion County, Kentucky his entire life.  On November 7, 1879, he was married to Harriett Elizabeth "Bettie" Thomas.  Betty was the daughter of Mark Thomas and Eliza Abell.  She died giving birth to their ninth child on November 26, 1896, son Leroy also died.  Mark was 10 years old.  Joe Tunk and Betty Spalding are buried in the Holy Name of Mary Cemetery in Calvary.  Joe Tunk's father was...


William Thomas "Bill Tunk" Spalding  Born October 18, 1818 in Calvary, Kentucky, he died at age 62 on March 6, 1881.  He was first married to Amanda Jarboe in 1839, then by 1850 he married Louisa Abell.  Louisa was the mother of "Joe Tunk", her parents were Joseph Abell II and Martha Mills.  William was the son of Richard A. Spalding and Henrietta Thompson.


John Austin Spalding  Born May 27, 1826, died May 26, 1913, his lifetime of 86 years spent in Marion County, Kentucky.  He married Ann Melvina Simms on his birthday in 1851.  Ann was the daughter of John Simms II and Mary Elizabeth Wathen.  John Austin was the son of Richard A. Spalding and it is not clear who his mother was.

Richard Augustine Spalding  Born April 16, 1777 in St. Mary's County, Maryland, died September 7, 1850 and is buried in Old Holy Name of Mary Cemetery in Calvary.  Richard had three wives, Henrietta Hamilton, Henrietta Thompson and Mary Charlton Adams, and he fathered at least 16 children.  Henrietta Thompson was the mother of William Thomas "Tunk" Spalding and may also have been John Austin's mother.  Richard was the son of...


Benedict Joseph Spalding II  Born December 1746 in what was known as Maryland, British America at that time.  He died August 1, 1815 in Kentucky at 68 years old.  In 1770, he was married to Alethaire Abell, daughter of Samuel Abell III and Eleanor O'Bryan. Benedict's father was...


Thomas Spalding  Born about 1640 in Wisset, Suffolk, England.  He died 1713 at age 73.  Thomas arrived in the Providence of Maryland at age 17 in 1657 as an indentured servant of John and Ann Shircliffe.   He later patented 3 tracts of land - Spalding's Addition, St Giles and William's Hermitage.  He was married to Catherine Hall about 1673.

Posted by Laura Mattingly at 11:30 AM No comments:


The Grand Island Daily Independent covered (and still covers) news from several small towns in the area, even those outside of Hall County.   Here is some news from Chapman in Merrick County and Giltner in Hamilton county, published on November 30, 1923. 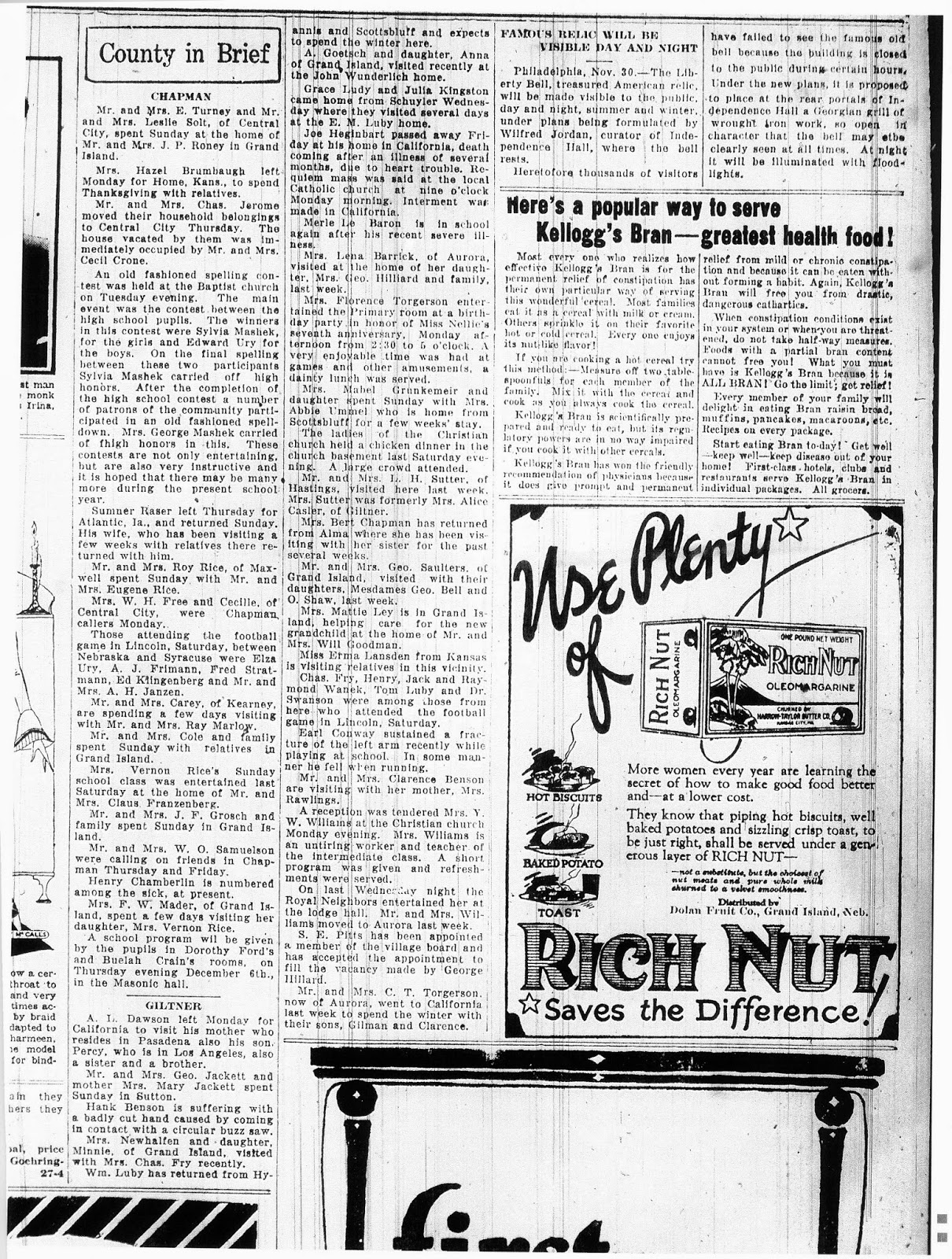 CHAPMAN
Mr. and Mrs. E. Turney and Mr. and Mrs. Leslie Solt, of Central City, spent Sunday at the home of Mr. and Mrs. J. P. Roney in Grand Island.
Mrs. Hazel Brumbaugh left Monday for Home, Kans., to spend Thanksgiving with relatives.
Mr. and Mrs. Chas. Jerome moved their household belongings to Central City Thursday.  The house vacated by them was immediately occupied by Mr. and Mrs. Cecil Crone.
An old fashioned spelling contest was held at the Baptist church on Tuesday evening.  The main event was the contest between the high school pupils.  The winners in this contest were Sylvia Mashek, for the girls, and Edward Ury for the boys.  On the final spelling between these two participants Sylvia Mashek carried off high honors.  After the completion of the high school contest a number of patrons of the community participated in an old fashioned spell-down.  Mrs. George Mashek carried off high honors in this.  These contests are not only entertaining, but are
also very instructive and it is hoped that there may be many more during the present school year.
Sumner Raser left Thursday for Atlantic, Ia., and returned Sunday.  His wife, who has been visiting a few weeks with relatives there returned with him.
Mr. and Mrs. Roy Rice, of Maxwell spent Sunday with Mr. and Mrs. Eugene Rice.
Mrs. W. H. Free and Cecille, of Central City, were Chapman callers Monday.
Those attending the football game in Lincoln, Saturday, between Nebraska and Syracuse were Elza Ury, A. J. Frimann, Fred Stratmann, Ed Klingenberg and Mr. and Mrs. A. H. Janzen.
Mr. and Mrs. Carey, of Kearney, are spending a few days visiting with Mr. and Mrs. Ray Marlow.
Mr. and Mrs. Cole and family spent Sunday with relatives in Grand Island.
Mrs. Vernon Rice's Sunday school class was entertained last Saturday at the home of Mr. and Mrs. Claus Franzenberg.
Mr. and Mrs. J. F. Grosch and family spent Sunday in Grand Island.
Mr. and Mrs. W. O. Samuelson were calling on friends in Chapman Thursday and Friday.
Henry Chamberlin is numbered among the sick, at present.
Mrs. F. W. Mader, of Grand Island, spent a few days visiting her daughter, Mrs. Vernon Rice.
A school program will be given by the pupils in Dorothy Ford's and Buelah Crain's rooms, on Thursday evening December 6th, in the Masonic hall.


GILTNER
A. L. Dawson left Monday for California to visit his mother who resides in Pasadena also his son, Percy, who is in Los Angeles, also a sister and a brother.
Mr. and Mrs. Geo. Jackett and mother Mrs. Mary Jackett spent Sunday in Sutton.
Hank Benson is suffering with a badly cut hand caused by coming in contact with a circular buzz saw.
Mrs. Newhalfen and daughter, Minnie of Grand Island, visited with Mrs. Chas. Fry recently.
Wm. Luby has returned from Hy-

annis and Scottsbluff and expects to spend the winter here.
A. Goetsch and daughter, Anna of Grand Island, visited recently at the John Wunderlich home.
Grace Ludy and Julia Kingston came home from Schuyler Wednesday where they visited several days at the E. M. Luby home.
Joe Heginbart passed away Friday at his home in California, death coming after an illness of several months, due to heart trouble.  Requiem mass was said at the local Catholic church at nine o'clock Monday morning.  Interment was made in California.
Merle Le Baron is in school again after his recent severe illness.
Mrs. Lena Barrick, of Aurora, visited at the home of her daughter, Mrs. Geo. Hilliard and family, last week.
Mrs. Florence Torgerson entertained the Primary room at a birthday party in honor of Miss Nellie's seventh anniversary, Monday afternoon from 2:30 to 5 o'clock.  A very enjoyable time was had at games and other amusements, a dainty lunch was served.
Mrs. Mabel Grunkemeir and daughter spent Sunday with Mrs. Abbie Ummel who is home from Scottsbluff for a few weeks' stay.
The ladies of the Christian church held a chicken dinner in the church basement last Saturday evening.  A large crowd attended.
Mr. and Mrs. L. H. Sutter, of Hastings, visited here last week.  Mrs. Sutter was formerly Mrs. Alice Casler, of Giltner.
Mrs. Bert Chapman has returned from Alma where she has been visiting with her sister for the past several weeks.
Mr. and Mrs. Geo. Saulters, of Grand Island, visited with their daughters, Mesdames Geo. Bell and O. Shaw, last week.
Mrs. Mattie Ley is in Grand Island, helping care for the new grandchild at the home of Mr. and Mrs. Will Goodman.
Miss Erma Lansden from Kansas is visiting relatives in this vicinity.
Chas. Fry, Henry, Jack and Raymond Wanek, Tom Luby and Dr. Swanson were among those from here who attended the football game in Lincoln, Saturday.
Earl Conway sustained a fracture of the left arm recently while playing at school.  In some manner he fell when running.
Mr. and Mrs. Clarence Benson are visiting with her mother, Mrs. Rawlings.
A reception was tendered Mrs. Y. W. Williams at the Christian church Monday evening.  Mrs. Williams is an untiring worker and teacher of the intermediate class.  A short program was given and refreshments were served.
On last Wednesday night the Royal Neighbors entertained her at the lodge hall.  Mr. and Mrs. Williams moved to Aurora last week.
S. E. Pitts has been appointed a member of the village board and has accepted the appointment to fill the vacancy made by George Hillard.
Mr. and Mrs. C. T. Torgerson, now of Aurora, went to California last week to spend the winter with their sons, Gilman and Clarence.

Posted by Laura Mattingly at 10:30 AM No comments: 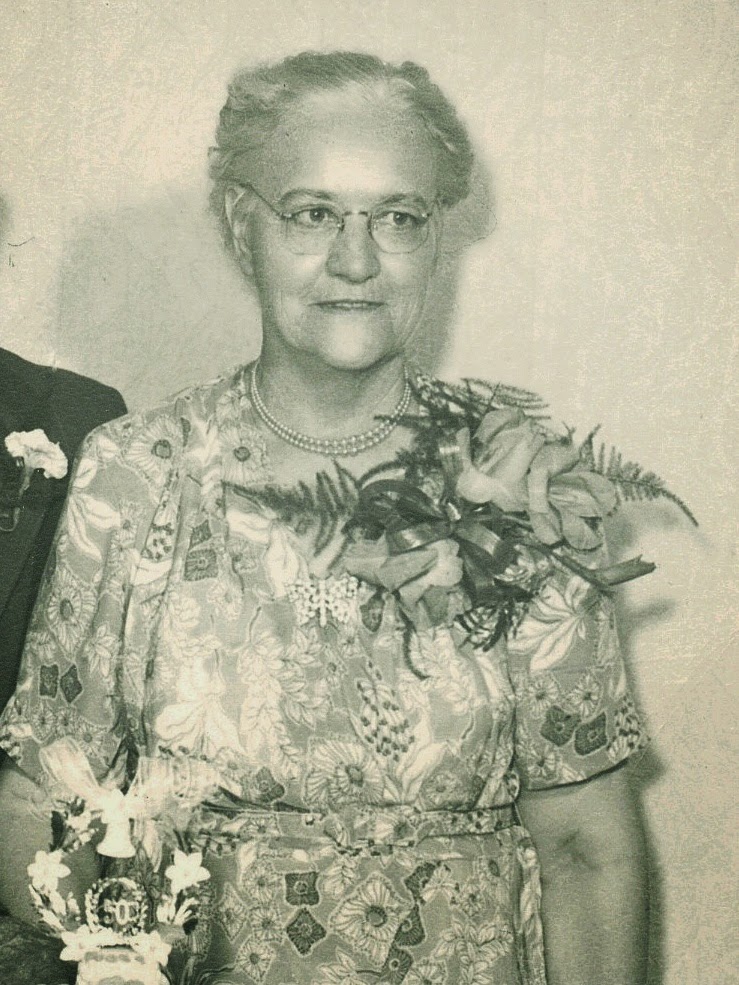 Her father was Charles Gaisford who had come from England as a young man.  Her mother was Henrietta Smith who had family ties back to colonial days in this country.

I have only a vague memory of Great Grandma.  She was in a wheelchair after losing first one leg, then the other to diabetes in her last few years.  I was probably 8 years old the last time I saw her.  There was an article in the Lincoln Sunday Journal and Star in 1968, that quoted her as saying "I can call off the name and age of every grandchild, also the [birth] month - but I sometimes miss the exact date."


Posted by Laura Mattingly at 7:00 PM No comments: