Barneston, Clatonia and Cortland are three little towns near Beatrice, Nebraska. These gossip columns are from the Beatrice Daily Sun, January 8, 1919. I copied these from microfilm because of the mention of my Great Grandmother Lottie Menke's brother. Oliver Roscoe was a victim of the influenza epidemic of 1918-19. Another clipping I have says he became ill with the flu in Vancouver, Washington and was sent to Camp Funston for discharge where the flu turned to pneumonia. The two articles differ on how long he was at home. This incorrectly says he was survived by only one sister, but there were two. Mrs. Laura Kyle from Carman, Manitoba, Canada should also have been mentioned.

For any others who might have relatives listed, here is the "latest gossip".

Mrs. Ed Schmidt returned home from Lincoln last Saturday where she had been visiting with relatives and friends a week.
Mr. and Mrs. Charley Day and daughter arrived home from Beatrice Thursday morning where they had been visiting at the home of her parents, Mr. and Mrs. T. F. Davis.
Mrs. J. B. Webber came down from Beatrice Thursday morning to visit with relatives at the Commercial Hotel.
Wm. Townsend is on the sick list this week.
George Whittmore, the horse buyer, from Liberty was in town Saturday.
John Wolken's moved into the parsonage last week.
John King of Liberty was a Barneston visitor Saturday.
Ben Fisher and Jim Baker went to Virginia Saturday evening being called there by the death of their brother-in-law.
Fred Weyer, last week purchased a farm from John Anderson trading his 80 acres east of town in the deal.
Rea Sevier returned home from Tarkio, Mo., last Friday morning, where he had been attending a training school.
Mr. and Mrs. W. C. Evans have moved to Tecumseh where Mr. Evans has purchased an elevator.
F. C. Wasmund went to Beatrice Saturday evening to spend Sunday with his wife.
Jim Turner and Mrs. Combs have returned to their homes at Fairfax, Mo., having been called here by the death of their niece.
Charley Robinson is reported to be on the sick list.
Miss Corale Pickett returned home Saturday morning from Beatrice where she had been working.
Quite a large crowd attended the Frank Hroch sale, east of town last Friday.
Joe Shalla's moved to town last Monday into their property which they recently purchased from John Wolken.
Arthur Bohner of the S. A. T. C. at the state university has returned to Lincoln to resume his work.
Vern Christlieb is reported to be slowly recovering from his severe illness of pneumonia.
The young folks tried their first skating on the river here Sunday.
Miss Elma Fredrickson left for Lincoln Saturday evening where she will attend a business college.
Miss Biggs was shopping in... 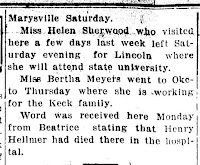 Marysville Saturday.
Miss Helen Sherwood who visited here a few days last week left Saturday evening for Lincoln where she will attend state university.
Miss Bertha Meyers went to Oketo Thursday where she is working for the Keck family.
Word was received here Monday from Beatrice stating that Henry Hellmer had died there in the hospital.


Mr. and Mrs. P. Wullschager returned to University Place after spending some time with relatives here.
The following people were Lincoln visitors Friday: Misses Emma Kindschi, Sophia Alpers, Matilda Alpers, Lena Vonderfeet, Sophia Steinmeyer, Mrs. Jacob Alpers, Mrs. J. H. Meyers and daughter Dorothy, August Kindschi and Dan Theasmeyer.
Mrs. B. M. Deardorf spent Thursday and Friday in Lincoln.
Mr. and Mrs. Ed Bute entertained the following guests at a New Year's dinner: Mr. and Mrs. Edgar Walker, Wm. and Fred Roker, Edwin Alpers and the Misses Rosa and Amelia Reichers, Mabel Warnken, Alma A. Alpers and Ella Konigsbrugge.
Art Eckel and Win Roker made a business trip to Beatrice Thursday.
Oliver Roscoe who received his discharge and arrived home on Christmas day, was taken seriously ill with double pneumonia and died on New Year's Day. He enlisted in the army soon after was was declared and has been stationed at various training camps since that time. The sympathy of this community is extended to the bereaved parents, Mr. and Mrs. Wm. Roscoe, through the early death of their son. He leaves to mourn his death, his parents, one sister, Mrs. Albert Menke, and three brothers, Cleve who is in France, Frank who is also in the service and Harlow. Funeral services were held Sunday afternoon.
Glen Chittenden and Dan Theasmeyer received their discharges and arrived home on New Year's Day. The former was stationed at Camp Wadsworth, S. D., and the latter at a camp in North Carolina.
Miss Martha Steinmeyer returned from Martell Sunday evening after spending a week with relatives.

Private George Bartoe of Camp Funston arrived Saturday evening on a four days furlough, to visit his mother, Mrs. Fred James. He returned to camp Tuesday. At a meeting of the town board Thursday evening, it was decided upon to lift the influenza ban from the town Monday morning. The public school which has been closed on account of the influenza opened Monday morning, and churches will hold services next Sunday.
Word has been received here of the death of Mrs. John Bintz, jr., formerly a resident of this vicinity. Mrs. Bintz was formerly Miss Minnie Buehler and lived for years in Wisconsin. About nine years ago she was married to John Bintz, jr., a Cortland boy. To this union three daughters were born. Besides her husband and daughters she leaves to mourn for her several brothers and one sister, Mrs. John Lucke, who lived for years in this locality, her parents, Mr. and Mrs. Buehler. Funeral services were held at the family home in North Dakota.
Private Lloyd Baer of Camp Funston spent Sunday with this parents, Mr. and Mrs. F. H. Baer and sister, Alta.
The officers of the Farmers Lumber Co. are busy invoicing this week preparing for the annual meeting which will be held some time in February.
Will Bartoe and family of Lincoln spent Sunday with his mother, Mrs. Fred James and family and George Bartoe of Camp Funston.
Henry Pfeiffer and family have moved to town where they will spend the rest of the winter.
Emil Schaad and family have moved to the farm he recently purchased from Henry Packard, which is situated east of Hallam.
Fred Moormeier autoed to Lincoln Thursday.
James Hammand has been doing Oscar Haupt's chores while the latter is in Kansas.
Erin D. Masters of Camp Funston is visiting this week with Cortland friends.
Harold Miltenberger of Columbus, Kas., arrived Saturday evening for a week's visit with his parents, Mr. and Mrs. Frank Miltenberger and other relatives.
Little Ruth Staatz, youngest child of Rev. and Mrs. W. C. Staatz of Clatonia passed away Saturday afternoon at her home in Clatonia. Had she lived until February 9 she would have been three years old. Ruth was born at Cortland. Besides her parents she leaves a sister Helen, two brothers Wilbus and John Staatz. The funeral will be held Tuesday afternoon at the home and burial will be in the Clatonia cemetery. 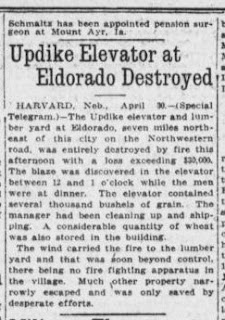 HARVARD, Neb., April 30. - (Special Telegram.)- The Updike elevator and lumber yard at Eldorado, seven miles northeast of this city on the Northwestern road, was entirely destroyed by fire this afternoon with a loss exceeding $30,000. The blaze was discovered in the elevator between 12 and 1 o'clock while the men were at dinner. The elevator contained several thousand bushels of grain. The manager had been cleaning up and shipping. A considerable quantity of wheat was also stored in the building.

The wind carried the fire to the lumber yard and that was soon beyond control, there being no fire fighting apparatus in the village. Much other property narrowly escaped and was only saved by desperate efforts.

These photos were possibly taken by someone in the Negley family who lived in Eldorado. All three are postcard photos that were never mailed. Eldorado's peak population was in 1910 with 100 residents. Eldorado's Post office opened in 1888 and closed in 1943. For a while there was a general store owned and run by the Negley Brothers Bill and Cal, but I haven't learned when. My Second Great Grandparents both served as Justice of the Peace, Josiah Negley from 1912 until his death in 1922, and Sarah Negley from then until 1925. Today, the land in the above photo is nearly all a cornfield.

Friday's Faces from the Past - A Closer Look


In September, 2014 I posted this photograph which I thought read "This is Myrtle and Deril". The "da." on the next line I thought might be an abbreviation of "daughter". After looking at it closer, I think my eyes neglected to see a hypen because the name "Derilda" was not familiar to me. That little hyphen made me take another look for Myrtle and her daughter "Derilda". 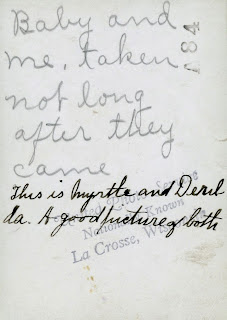 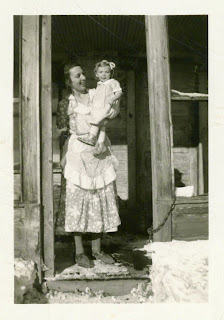 Still looking in the 1940 census because I thought the picture had been taken around that time based on the printed photograph and the way they were dressed, I found no Myrtle and Derilda. But when I searched other online family trees for a mother/daughter without using any dates, I found a family that has a connection to my ancestors. By the ages of that Myrtle and Derilda, the photo had to have been taken 20 years earlier than I was thinking.

I found a Myrtle Jessie and Helen Derilda who had the last name Hebert. This tree showed Myrtle's maiden name was Pitt. That name was familiar to me. Years ago I had heard from someone named Pitt. Myrtle's father was William Pitt, her mother was Martha Berkstresser. I knew how the Berkstresser name fits into my family tree.

For ease of explanation I'll say this photo was originally given to my Second Great Grandparents, Josiah and Sarah Negley who lived in Eldorado, Nebraska.  Sarah's maiden name was Lee, her brother was George W. Lee. George was married to Christine Berkstresser. Martha and Christine were sisters. So, Myrtle is Sarah Negley's sister-in-law's niece.

The Berkstresser and Negley families had both lived in Bedford County, Pennsylvania before moving first to Bureau County, Illinois, and then the Clay county, Nebraska area. Josiah Negley and Christine Berkstresser were both born in 1846, Martha was about 10 years younger.

Myrtle Jessie Pitt was born in 1894 and Derilda in 1914, so in this picture if Derilda is about 3 years old, Myrtle would be about 23. Between 1900 and 1910, William & Martha Pitt moved from Eldorado, Nebraska to Fergus county, Montana. That is where Derilda was born. Following Helen Derilda Hebert in the online trees, she was shown to have married Robert Chester Holmes and had at least a couple of children. She died in 1968 in Seattle, Washington.

The only explanation I have for the stamp "United Photo Service, LaCrosse, Wisconsin" is that whoever took the photo sent their film there for processing. We used to send our film somewhere to be processed. I remember the fun of getting the pictures back! Sometimes it took from Christmas to the county fair to finish a roll of film. You never knew what would be in that envelope.