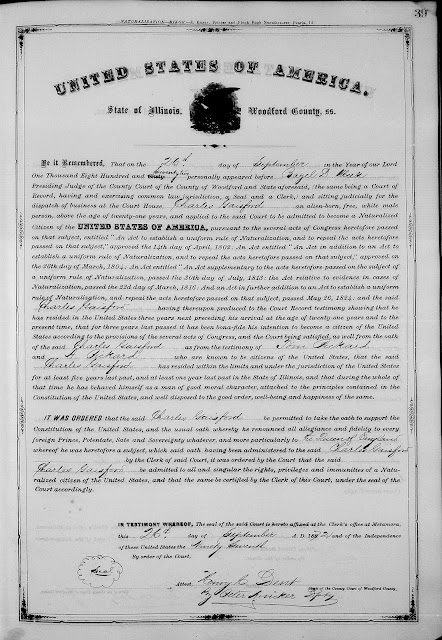 IT WAS ORDERED that the said <Charles Gaisford> be permitted to take the oath to support the Constitution of the United States, and the usual oath whereby he renounced all allegiance and fidelity to every
foreign Prince, Potentate, State and Sovereignty whatever, and more particularly to <the Queen of England>
whereof he was heretofore a subject, which said oath having been administered to the said <Charles Gaisford>
by the Clerk of said Court, it was ordered by the Court that the said
<Charles Gaisford> be admitted to all and singular the rights, privileges and immunities of a Natu-
ralized citizen of the United States, and that the same be certified by the Clerk of this Court, under the seal of the
Court accordingly.

IN TESTIMONY WHEREOF, The seal of the said Court is hereto affixed at the Clerk's office at Metamora,
this <26th> day of <September> A. D. 1872, and of the Independence
of these United States the <Ninety Seventh>
By order of the Court,

Charles Gaisford was one of my last direct ancestors to immigrate to the US. His youngest brother was born in Rhode Island in 1859. In 1872 when Charles filed for citizenship he was 30 years old with 3 young children. His witnesses Tom and A. Pickard are his brother-in-law and his sister Anna Pickard. Henrietta, Charles' wife, was a descendant of colonialists in British America as early as the mid-1600's.

Posted by Laura Mattingly at 4:00 AM No comments:

Three Death Records and a Baby


On the right hand side of this page under "Labels" if you click on "Simmons" you will find other posts I've written on this branch of my family tree. In several of those posts, I mention I had not been able to find death records for some of my direct Simmons ancestors. I plan to prove my line to the Revolutionary War Patriot, Libbeus Simmons, and submit a DAR supplemental application. Last year I focused on this line, and was able to find some information on the deaths of three of these Simmons ancestors. Maybe not exact dates, but good enough for my satisfaction. We'll have to see about DAR.

1. Ruth Webb, daughter of Jonathan Smith and Rachel Simmons; married first to Lebius Simmons;  and second to Cyrus Webb. Ruth's mother and her husband were first cousins, so she married her first cousin once removed.
I was sure that Ruth died in Fulton County, Illinois sometime between 1862 and 1866 when she was the wife of Cyrus Webb. You always read about the importance of military records, but if a man mustered into camp, got sick and died within a month I questioned whether there would be much of any information in his file. The military records site Fold 3 offered a free weekend, so I tried to get the "Minor's Pension" listed for Cyrus but I could not get access. About that time another company offered a sale on obtaining military records, so I took advantage of their offer and got the Minor's Pension. An affidavit from the midwife present at the births of the children of Cyrus and Ruth gave me her death date. In the affidavit, the midwife swears "that she was acquainted with Cyrus Webb and wife for ten years before she died...and that they lived together as husband and wife til Mrs Webb died which was on or about the 25th day of October, 1863." No full name given, but for me this was well worth the money spent.

2. I had the kind of experience that would make a great commercial for Genealogybank, the newspaper subscription site. My SECOND search there lead me to a very short sentence. "In Canton Esther, wife of Lebbeus Simmons, 48". Esther and Lebbeus Simmons were the parents of the Lebius Simmons above. They are my 4th Great Grandparents.
That sentence was included in a long list of deaths from all around the country printed in the Commercial Advertisor, a New York newspaper in 1839. I NEVER would have looked for anything on them in a New York newspaper, they never lived in New York. I'm sure that that newspaper picked up that little bit of news from some Illinois newspaper, likely somewhere close to Canton. Someday I hope to find that Illinois paper and read much more than one sentence. The Genealogybank subscription fee was much less than a trip to Illinois searching through all local papers for her obituary. 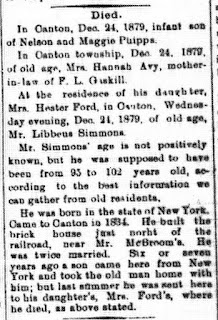 "At the residence of his daughter, Mrs. Hester Ford, in Canton, Wednesday evening, Dec. 24, 1879, of old age, Mr. Libbeus Simmons.
Mr. Simmons' age is not positively known, but he was supposed to have been from 93 to 102 years old, according to the best information we can gather from old residents.
He was born in the state of New York. Came to Canton in 1834. He built the brick home just north of the railroad, near Mr. McBroom's. He was twice married. Six or seven years ago a son came here from New York and took the old man home with him; but last summer he was sent here to his daugher's, Mrs. Ford's, where he died, as above stated."

Lebbeus was actually married three times, and he was born in Maine, not New York, but newspapers do make mistakes. Notice it says "At the residence of his daughter "Mrs Hester Ford". Before I had this obit, and back when Fold 3 had that free weekend, there was another pension I was able to get. The Widow's pension for William H. Mills was accessible (maybe only Widow's pensions, not Minor's pensions were included in "free"?). In his file was another affidavit from a woman who was present at the births of William's children. William's wife was Rosilla Douglas Simmons, who was the daughter of Lebbeus & Esther, and a sister to Lebius Simmons. The "midwife" was Esther Ford, a name at that time I had never before seen associated with Simmons. Looking into who Esther Ford was, I found the marriage record of John Ford and Esther Simmons. She was born in Maine and her birth year was just a few years later than Lebius, so she could easily be his sister. At that point, I assumed she was named after her mother and helped deliver her sister Rosilla's children. After getting this clipping I knew for sure she was another child of Lebbeus and Esther Simmons.

Having the information on these deaths will help with my DAR Supplemental application. I still need one death and two marriage records. This line has been something I've worked on for twenty years. I really hope it will pass the scrutiny of the DAR, but as for me, I have faith in what I've found.


How I Am Related to persons in this narrative:

Women Involved in the Fight


With March being Women's History Month, and the 100th anniversary of the 19th Amendment coming in just two years, I've been trying to find out more about my female ancestors and their political interests.  Nine of my direct female ancestors living in 1920 were of eligible age to vote.  The oldest was Mary Roscoe at 84, my Third Great Grandmother.  My emails to local election offices have not been answered, so I don't know if any of them were registered. I can't get to court houses unless I use vacation time, so I turned to online Nebraska newspapers with high hopes. Unfortunately, the papers local to my ancestors are not online and their names didn't make the papers on a state-wide level.

Still, it has been interesting reading these old newspaper articles on the suffrage movement here.  The Nebraska Women Suffrage Association was organized in 1881 and worked for almost 40 years for the cause.  The women listed below were involved as state officers, committee members, even delegates to national events.  This is by no means a complete list, but I want to recognize and remember some of the Nebraska women who were involved in the fight.

Posted by Laura Mattingly at 5:30 AM No comments: