Whether superstition had anything to do with it or not, no one in my family tree was married on April Fools Day.  April 5th and 15th were the most popular dates with 3 couples each out of a total of 40 couples in my tree that I have a marriage record for who chose a date in April.  This year I'm focusing on the marriage records for my direct ancestors - what I have, what I'm missing.  From my database I printed a report of all marriages by month.  I'm not as familiar with the names several generations back in my tree, I have to look them up to see which branch they are in.  Seeing them individually and out of the pedigree box they're usually in gives me a different perspective.

In my paternal Great Grandmother Lottie Roscoe's line there are three different couples who were married in April.  First my Third Great Grandparents David Roscoe & Mary Fero were married on  April 6, 1854.  David died soon after their 30th wedding anniversary.

Both sets of David Roscoe's maternal Great Grandparents (my Sixth Great's) were married in April.  On April 3, 1729 John Corbin & Martha Hosmer got married.  And on April 5, 1742 William Harlow & Hannah Littlejohn tied the knot.

Edward Spann & Margaret Harvey were married on April 4, 1621.  With dates that far back, I'm always amazed when I find a record, but Family Search has it online.  There is no image of the original document, but the Cheshire, England Parish Records have been filmed and indexed by the LDS Church.  Edward & Margaret are Great Grandma Allie Spann's Seventh Great Grandparents.

These marriages all happened so long ago, I'd be foolish to think I could find a photo of each happy couple.  I can't always put a face to a name, so I think outside the pedigree box once in a while for a different look at my ancestors.

Posted by Laura Mattingly at 4:30 AM No comments:

Friday's Faces from the Past - Harvard Kids #1 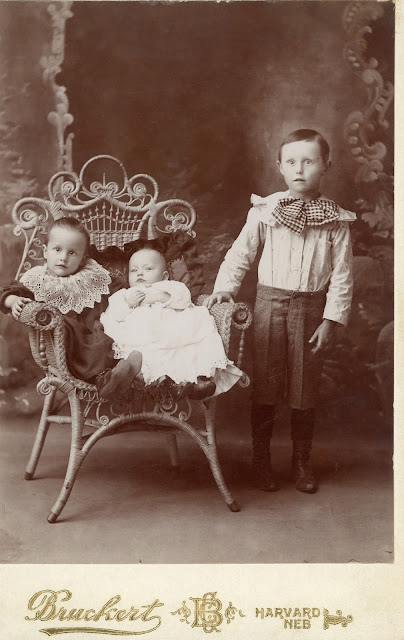 The photographer is obviously Bruckert from Harvard, Nebraska.

Three children, the oldest looks like a boy about 5 years old.  The next younger may be a girl about three, and the infant looks about a year old, the sex is hard to tell.

The only other clue I would have to help identify these kids is that they most likely lived in the Harvard or Eldorado area of Clay County, or around Stockham in Hamilton County.  If you think you might know these children, please leave a comment!


Posted by Laura Mattingly at 3:30 AM No comments:


There is one reel of microfilm at the Nebraska State Historical Society Library of The News-Reporter from Cozad, Nebraska covering the years 1891-1892.  I searched the entire reel and found one paragraph mentioning my Great Great Grandfather, John McGrath.  It wasn't good news.  But there may be good news for someone else in here. 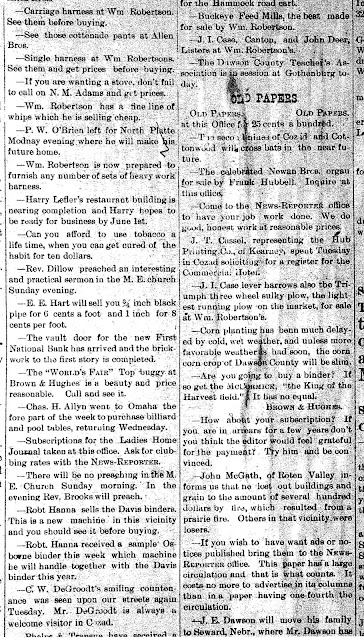 Column 1
--Carriage harness at Wm Robertson.  See them before buying.
--See those cottenade pants at Allen Bros.
--Single harness at Wm Robertsons See them and get prices before buying.
--If you are wanting a stove, don't fail to call on N. M. Adams and get prices.
--Wm. Robertson has a fine line of whips which he is selling cheap.
--P. W. O'Brien left for North Platte Modnay evening where he will make his future home.
--Wm. Robertson is now prepared to furnish any number of sets of heavy work harness.
--Harry Lefler's restaurant building is nearing completion and Harry hopes to be ready for business by June 1st.
--Can you afford to use tobacco a life time, when you can get cured of the habit for ten dollars.
--Rev. Dillow preached an interesting and practical sermon in the M. E. church Sunday evening.
--E. E. Hart will sell you 3/4 inch black pipe for 6 cents a foot and 1 inch for 8 cents per foot.
--The vault door for the new First National Bank has arrived and the brickwork to the first story is completed.
--The "WORLD'S FAIR" Top buggy at Brown & Hughes is a beauty and price reasonable.  Call and see it.
--Chas. H. Allyn went to Omaha the fore part of the week to purchase billiard and pool tables, returning Wednesday.
--Subscriptions for the Ladies Home Journal taken at this office.  Ask for clubbing rates with the NEWS-REPORTER.
--There will be no preaching in the M. E. Church Sunday morning.  In the evening Rev. Brooks will preach.
--Robt Hanna sells the Davis binders.  This is a new machine in this vicinity and you should see it before buying.
--Robt. Hanna received a sample Osborne binder this week which machine he will handle together with the Davis binder this year.
--C. W. DeGroodt's smiling countenance was seen upon our streets again Tuesday.  Mr. DeGroodt is always a welcome visitor in Cozad.

Column 2
--Buckeye Feed Mills, the best made for sale by Wm. Robertson.
--J. I. Case, Canton, and John Deer, Listers at Wm. Robertson's.
--The Dawson County Teacher's Association is in session at Gothenburg today.

OLD PAPERS
OLD PAPERS, at this Office for 25 cents a hundred.
--The second nines of Cozad and Cottonwood will cross bats in the near future.
--The celebrated Newman Bros. organ for sale by Frank Hubbell.  Inquire at this office.
--Come to the NEWS-REPORTER office to have your job work done.  We do good, honest work at reasonable prices.
--J. T. Cassel, representing the Hub Printing Co., of Kearney, spent Tuesday in Cozad soliciting for a register for the Commercial Hotel.
--J. I. Case lever harrows also the Triumph three wheel sulky plow, the lightest running plow on the market, for sale at Wm. Robertson's.
--Corn planting has benn much delayed by cold, wet weather, and unless more favorable weather is had soon, the corn corn crop of Dawson County will be slim.
--Are you going to buy a binder?  If so get the MCCORMICK, "the King of the Harvest field."  It has no equal.   BROWN & HUGHES
--How about your subscription?  If you are in arrears for a few years don't you think the editor would feel grateful for the payment?  Try him and be convinced.
--John McGrath, of Roten Valley informs us that he lost out buildings and grain to the amount of several hundred dollars by fire, which resulted from a prairie fire.  Others in that vicinity were losers.
--If you wish to have want ads or notices published bring them to the NEWS-REPORTER office.  This paper has a large circulation and that is what counts.  It costs no more to advertise in its columns than a paper having one-fourth the circulation. 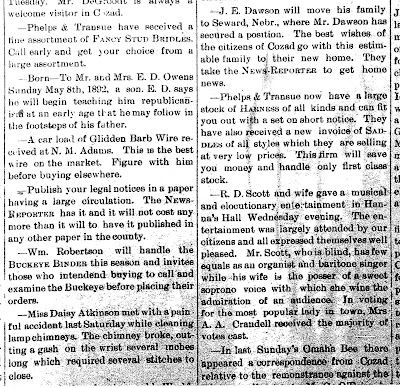 Column 1
--Phelps & Transue have seceived a fine assortment of FANCY STUD BRIDLES.  Call early and get your choice from a large assortment.
--BORN - To Mr. and Mrs. E. D. Owens Sunday May 8th, 1892, a son.  E. D. says he will begin teaching him republicanism at an early age that he may follow in the footsteps of his father.
--A car load of Glidden Barb Wire received at N. M. Adams.  This is the best wire on the market.  Figure with him before buying elsewhere.
--Publish your legal notices in a paper having a large circulation.  The NEWS-REPORTER has it and it will not cost any more than it will to have it published in any other paper in the county.
--Wm. Robertson will handle the BUCKEYE BINDER this season and invites those who intendend buying to call and examine the Buckeye before placing their orders.
--Miss Daisy Atkinson met with a painful accident last Saturday while cleaning lamp chimneys.  The chimney broke, cutting a gash on the wrist several inches long which required several stitches to close.


Column 2
--J. E. Dawson will move his family to Seward, Nebr., where Mr. Dawson has secured a position.  The best wishes of the citizens of Cozad go with this estimable family to their new home.  They take the NEWS-REPORTER to get home news.
--Phelps & Transue now have a large stock of HARNESS of all kinds and can fit you out with a set on short notice.  They have also received a new invoice of SADDLES of all styles which they are selling at very low prices.  This firm will save you money and handle only first class stock.
--R. D. Scott and wife gave a musical and elocutionary entertainment in Hanna's Hall Wednesday evening.  The entertainment was largely attended by our citizens and all expressed themselves well pleased.  Mr. Scott, who is blind, has few equals as an organist and baritone singer while his wife is the posser of a sweet soprono voice with which she wins the admiration of an audience.  In voting for the most popular lady in town, Mrs. A. A. Crandell received the majority of votes cast.