It's been a bitter cold, dreary winter. Besides the winter blahs, other things have happened that have kept me from both research and blogging family history. These newspaper clippings don't take much time to transcribe, so a quick post like this helps me get back into blogging. If these provide some valuable information for someone, that's even better. And if Spring would get here it would be great!

These were all copied from microfilm of the Canton Weekly Register, Canton, Illinois. Some of these are very difficult to read, so I may have not read the names correctly. See the other years that I've posted clippings from as well: 1852, 1853, and 1854. 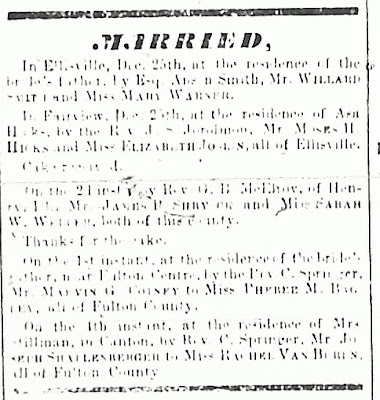 Canton Weekly Register, January 7, 1862
MARRIED,
In Ellisville, Dec. 25th, at the residence of the bride's father, by Esq. Anson Smith, Mr. WILLARD SMITH and Miss MARY WARNER.
In Fairview, Dec. 25th, at the residence of Asa Hicks,  by the Rev. J. S. Johnson, Mr. MOSES H HICKS and Miss ELIZABETH JONAS, all of Ellisville.
Observed
On the 21 inst by Rev. G. B. McElroy, of Henry, Ill. Mr. JAMES P. SHRYOCK and Miss SARAH W WELLER, both of this city.
Thanks for the cake.
On the 1st inst., at the residence of the bride's father, at Fulton Center, by the Rev. C. Springer, Mr. MARVIN G. COUNTY to Miss PHEBE M. BAGTEN, all of Fulton County.
On the 11th inst., at the residence of Mrs. Willman(?), in Canton, by Rev. C. Springer, Mr. JOSEPH SHALLENBERGER to Miss RACHEL VAN BUREN, all of Fulton County. 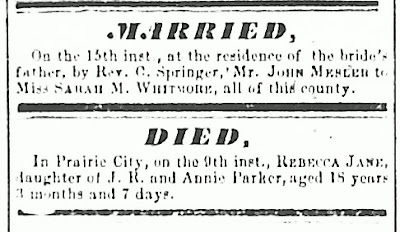 Canton Weekly Register, January 21, 1862
MARRIED,
On the 15th inst., at the residence of the bride's father, by Rev. C. Springer, Mr. JOHN MESLER to Miss SARAH M WHITMORE, all of this county.
DIED,
In Prairie City, on the 9th inst., REBECCA JANE, daughter of J. R. and Annie Parker, aged 18 years, 3 months and 7 days. 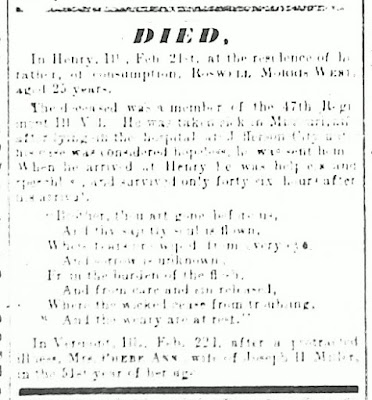 Canton Weekly Register, March 4, 1862
DIED,
In Henry, Ill., Feb. 21st, at the residence of his father, of consumption, ROSWELL MORRIS WEST, aged 25 years.
The deceased was a member of the 47th Regiment Ill. Vol. He was taken sick on M???  after lying in the hospital at McPherson City and he was considered hopeless, he was sent home. When he arrived at Henry he was helpless and feeble and survived only forty six hours after arriving.
Brother, thou art gone before us,
And thy saintly soul is flown
Where tears are wiped from every eye
And sorrows are unknown
From the burden of the flesh
And from care and fear, released,
Where the wicked cease from troubling,
And the weary are at rest.

In Vermont, Ill. Feb. 22nd after a protracted illness Mrs. PHEBE ANN wife of Joseph H. Miller(?), in the ?1st year of her age. 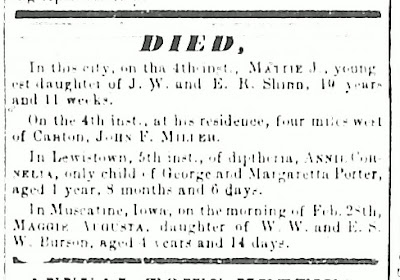 Friday's Faces from the Past - Clarence L. Mann 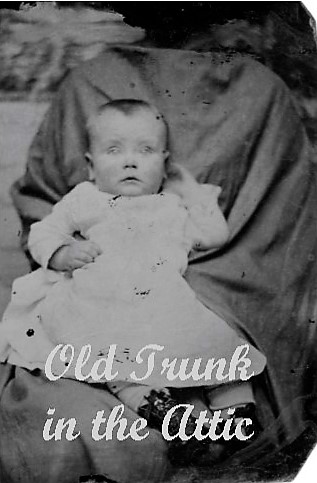 How often can you find a photograph of one of your Great Grandparents as an infant? I feel very lucky to have this! The above tin-type was in a plastic baggie with other old pictures in a box of my Grandma Menke's things. When I saw it, I thought the little guy could possibly be her Dad, Clarence Mann. After posting it in a Facebook family group, I got word that his youngest daughter also thinks that it is him.


Clarence Lemuel Mann was born June 18, 1878 and died at the age of 90. I'd guess he looks about 2 years old in the tin-type, so it was taken about 1880 probably in Illinois. Clarence was the 11th child of 12 children born to William and Nancy (Climie) Mann, though his older siblings Stephen, Corrine and Carrie had passed away before he was born. Another sister, Elsie, was born and died in August of 1880.  All of the children were born in Illinois, and then in December of 1881 his fifteen-year-old brother Lafayette died in Nebraska.

Like his father, Clarence farmed for many years. He married Cora Mabel Gaisford on July 5, 1899 in Fairbury and they were the parents of 14 children, one son died in infancy. Clarence and Cora moved into Beatrice about 1935. He worked for Dempster Mills for 10 years, then enjoyed retirement from 1952 until his death on October 18, 1968.


Posted by Laura Mattingly at 4:00 AM No comments: