I'm so thankful that times have changed.

This first note below is from Mary C. Roscoe, my Third Great Grandmother. This is the earliest one of several I have, but it sounds like there was at least one before. These were included in the probate file of David A Roscoe, her husband, who died without a will on May 13, 1884 in DeWitt, Nebraska. Their son Ervin, died a year and a half later on November 29, 1886. Mary was forced to request money from the estate to help with the expenses of burying their eighteen year old son.

The second note is one of several "permission slips" signed by three of her four oldest boys - William, Sherman, George, and Franklin, who were all over the age of 18 when their father died. Her daughter Nancy was married and 29 years old, and was never a factor in the matter. 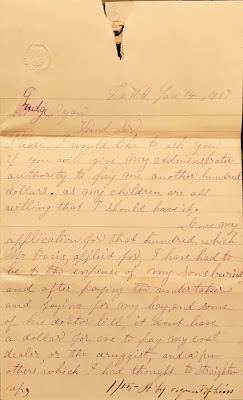 DeWitt, Jan. 14, 1887
Judge Ryan
Kind Sir,
Please, I would like to ask you if you will give my Administrater authority to pay me another hundred dollars as my children are all willing that I should have it.
Since my application for that hundred, which Mr. Davis, applied for, I have had to be to the expense of my sons burial, and after paying the undertaker and paying for my hay, and some of his doctor bill, it don't leave a dollar for me to pay my coal dealer, or the druggist, and a few others which I had thought to straighten up (continued on back)

1/15 A by requests of heirs (this was maybe written by the Judge?)

(back side, not pictured)
I am aware that it will reduce my interest money. But the older boys all say that they want me to have money sufficient to live on, and keep the two younger boys, while I live, and they think if they keep their health, when it is gone, there will be money to be earned. 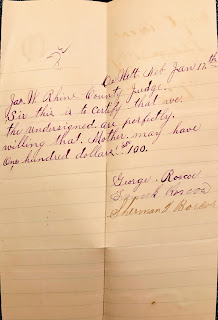 Now Judge Please write me, your opinion on this, and oblige, Mrs. M. Roscoe, DeWitt

DeWitt, Neb. Jan. 17th
Jas. W. Rhine County Judge
Sir this is to certify that we the undersigned are perfectly willing that Mother may have one hundred dollars. $100.

David and Mary were married April 6, 1854 in Utica, New York. Ten years later, they moved with their young family of 5 children at that time to Peotone, Illinois where they spent the next 20 years. Five more children were born in Peotone. They had just moved to DeWitt, Nebraska a few short months before David's death.

Over the course of the eight and a half years that the estate was in probate, Mary had to make several requests for money to cover her living expenses and other necessities like coal, doctors bills, tuition and clothing for the younger boys. Besides Ervin, when David died Bert was 14, Edward was 10 and Charles was 8. 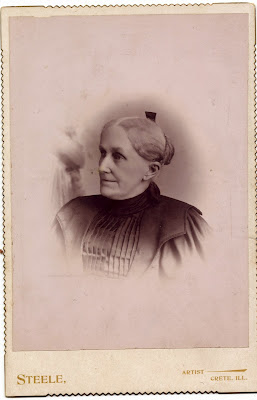 I don't think Mary was very satisfied with Mr Richard Davis, the Administrator of the estate. In some of the notes, Mary asks the Judge to "hurry him up, if it is in your power to do so", and says "he is very slow and easy". She also said, "I don't think it need concern him how much money I draw, as my boys are will for me to have it."

Final settlement of the estate was made in January of 1893 and Mary received $16.22. Her marriage to Lyman Adams in September of 1891 probably eliminated her from any claim to a part of the estate. There are several other documents in the file that I have yet to sort out. I'm focused on these notes for now.

Lyman Adams left Mary a widow again in 1894. She died in 1923, living long enough to see women win the right to vote. I've tried to see if she was a registered voter in 1920, but I was told they don't have those records.

I am so thankful that times have changed.

Posted by Laura Mattingly at 8:30 AM 2 comments: