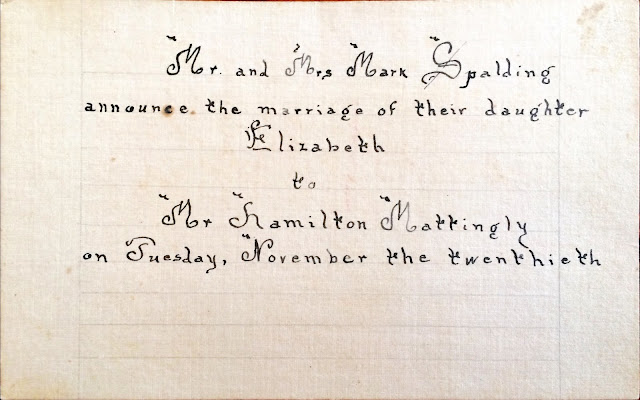 The wedding of Miss Elizabeth Spalding and Hamilton Mattingly, both popular young people of the Calvary section, was solemnized Tuesday morning at 6:00 o'clock at Holy Mary's Church at Calvary, the pastor, Rev. J. P. Welsh, officiating in the presence of quite a number of relatives and friends.  A Nuptial High Mass followed the ceremony.

Miss Rebecca Spalding, sister of the bride, was the bridesmaid, and Vincent Spalding was the groom's best man.The bride was attractively attired in a brown crepe dress trimmed in velvet with hat and other accessories to harmonize.  She carried an arm bouquet of pink rosebuds and ferns.

The bridesmaid wore a green crepe dress with accessories to match and carried pink rosebuds and ferns.Following the ceremony, breakfast was served at the home of the bride's parents, after which Mr. and Mrs. Mattingly left for Mount St. Joseph's Academy, Daviess County, where they visited her sister, Sister Praxedes.  They will go to housekeeping in an apartment at the home of Miss Ethel Goodin on Chandler Street in this city.

Mrs. Mattingly is a daughter of Mr. and Mrs. Mark Spalding and possesses many qualities of mind and heart that have endeared her to a wide circle of friends.  She attended school at Calvary and was graduated from St. Charles High School at St. Mary.  Later she attended Campbellsville College.  For two terms she was an efficient teacher in the county schools and at one time was a nurse at Boldrick's Infirmary in this city.

Mr. Mattingly is an energetic young man and is employed at the John A. Wathen Distillery Co.  Until a few months ago he was engaged in farming.  He is a son of Mrs. Lottie Mattingly and the late William Mattingly.

Irma Bartz came here from Phillips, for over Sunday to visit with relatives.
Mr. and Mrs. Lloyd Gotheredge, have moved to Harvard where they will reside the coming year.
Mrs. J. C. Henderdeen came home from Stromsberg Thursday where she had visited with relatives.
Mr. Burnham, State Normal Inspector of Lincoln, and Miss Allen of Aurora, were at the high school Tuesday, where the former gave a lecture to the normal trainers.
O. D. Lansden and family went to Kansas Friday for a week's visit, and Mr. and Mrs. Elias Walker, are taking charge of their place during their absence.
The Goodale Bros., left Tuesday for York, after attending the reception at the church here Monday evening.
Mr. and Mrs. Pugh have returned from Omaha where they visited their daughter.
W. J. Larmore came home from Lincoln last Wednesday where he went on a business trip.
Edd Cooney came in from Overton Wednesday, where he visited relatives.
L. E. Highland returned last week, from a business trip to Montana.
Mr. and Mrs. Thomas Humphrey are happy over the arrival of a little daughter who came to their home last Monday.
Dorthea McKibbon was a visitor at the Bierbower home last week, She had been teaching school in Colorado, but owing to the weather conditions and sickness, the attendance was cut down so she was given a vacation at this time.
Wm. Lee and Roy Thompson last week, the former with hogs, and the latter with sheep. 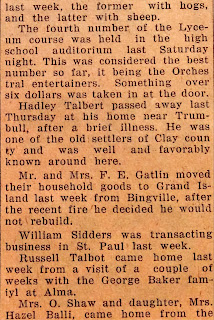 The fourth number of the Lyceum course was held in the school auditorium last Saturday night.  This was considered the best number so far, it being the Orchestral entertainers. Something over six dollars was taken in at the door.
Hadley Talbert passed away last Thursday at his home near Trumbull, after a brief illness.  He was one of the old settlers of Clay county and was well and favorably known around here.
Mr. and Mrs. F. E. Gatlin moved their household goods to Grand Island last week from Bingville, after the recent fire he decided he would not rebuild.
William Sidders was transacting business in St. Paul last week.
Russell Talbot came home last week from a visit of a couple of weeks with the George Baker family at Alma.

Mrs. O. Shaw and daughter, Mrs. Hazel Balli, came home from the western part of the state Wednesday.  They had gone to visit relatives but on arriving at their destination by rail, were unable to make the trip of twenty miles across country so were obliged to return home.
Mrs. Mayme Wainwright, underwent an operation on the throat at her home on Wednesday, a physician from Aurora attending her.  She is doing nicely.
Pauline Rich went to Grand Island Monday where she received medical treatment the past week.  The grammar room and the teacher Miss Ogle, were at the train and gave her a valentine shower before she departed.
Mrs. Gilman Torgerson was a passenger to Hastings between trains Saturday.
The home economics class held a pie sale in J. A. Marvels store last Saturday afternoon.  They baked 16 pies and sold all but three.
The basket ball team and their coach, H. V. Marsh went to Clay Center Friday night and was defeated 21 to 9.  Kearney Tuesday, 20-35; Minden Wednesday, and were unlucky again with 31-11.  On Thursday night, Aurora hired the boys to play Ord at Aurora, and were again defeted 26-24.  The second team was scheduled to play Phillips Saturday afternoon but they having no inside gym, the weather was not favorable for an out-door game, so was postponed until a later date.
Mrs. Joe Talish was taken to Aurora Saturday for an X-Ray examination on her lungs.

Posted by Laura Mattingly at 11:30 PM No comments:


Three out of four of my Second Great Grandparents on my Dad's side were farm families in Nebraska in 1885.  How do I learn what livestock and crops they raised?  There's a census for that. Family Search has online the actual images of the 1885 Nebraska State Agricultural census with each page full of the information for ten different farmers, including how much land, how many horses, cattle & other livestock, and what crops they raised.  Clicking on the image here will make it bigger, but still not big enough to read well.  To make it easier to compare my families, I created a spreadsheet with only the info for them.  I've added a factor for the people in the household - the ones who worked the farm.  I've given a count as to how many Males and Females, Under Age 12 and Over Age 13 to see how the responsibilities fell on the household.  Those numbers came from the Population portion of that 1885 census.  Line numbers on the left coordinate with the columns on the original census form.  The locations for these three are in Gage (Menke) and Jefferson (Mann & Gaisford) counties.  Mann and Gaisford were in the same precinct.  The fourth set of Second Great Grandparents (Roscoe) had been farmers, but in 1885 he was in Agri-business selling windmills and pumps.


I wasn't surprised that none of them raised sheep, but very surprised that Indian corn was the only variety of corn asked about on the form.  There were differences in amount of land and livestock between them all, but Henry Menke and William Mann were nearly even in total farm value.  Ancestry has online the 1880 Agricultural census which asked for the same information.  I can use that to compare the difference 5 years made for each farm family, but I won't post that here.

To see all of the chart click on the white bar along the right side under the arrow, hold and slide down.