Mary Smith Cook and Her Family


Mary Smith Cook was one of the sisters of my 3rd Great Grandmother, Ruth Smith Simmons Webb.  They were just a few years apart, numbers five and six of Jonathan and Rachel Smith's 10 children.  About 1846, Mary was married to Mathias Cook.  After some quick searching, I have found some things about Mary Cook and her family.

In the 1850 census, the sisters and their families are living next to each other in Cool Spring Township, Mercer County, Pennsylvania.  Mathias and Mary had two children, daughter Mary, age 3 and an as yet unnamed son, age 1.

In 1860, the Cook family was in Ritchie County, Virginia (now West Virginia).  That is where in 1854 Mary's sister Ruth married Cyrus Webb after the death of her first husband.  In the census shown below, Mary's daughter Mariah was born in Pennsylvania and Martha was born in Virginia, so they had moved there between 1853 and 1856.  They were probably there for Ruth's wedding.  Ruth & Cyrus Webb moved to Fulton County, Illinois about 1858.  Ritchie County may have been the last place that the two sisters saw each other and may be where Mary was living when Ruth died.


Ten years later, the Cook family shows up in York, Noble County, Indiana.  Mathias is no longer a Blacksmith, but a farmer.  Wife Mary is 43, the kids are all ten years older with four additional children - Mason, 10; Miranda, 7; Mosell, 4 and Edith, 2.

It's interesting here - I think the name Mosell could be Rosella as I found in the 1885 census.  At age 4, she was born very near the time that Mary's niece Rosella Simmons Davee (who was probably named after her father's sister) died in Illinois.

By 1880 they all moved once again to Rock Creek Township, Saunders County, Nebraska.  That would be about 200 miles east of where Ruth's oldest daughter Rachel, my Great Great Grandma, would moved to about 1886.  Matthias was now 63 and Mary, 52.  The older girls and Mason were not with the family, but Washington, "Maridy", Mosella, and Edith were there.

The Nebraska State census in 1885 below shows them still living in Rock Creek Township.  Edith, listed as Lenora, Rosell and M. W. are there.  Also a John Hedkins, 27 from Virginia is with them.

Family Search has a database of some Nebraska marriage records (definitely not all for the time period it covers).  I found marriage records that could be for five of the daughters of Mathias and Mary:

I have not been able to find anything on the death or burial for either Mathias or Mary Cook.  The Saunders County GenWeb page has some cemetery listings and for Mt Zion Cemetery there is one listing for Cook.  "Munson J. dau of M & M Cook, d. 10 SEP 1876 15 Y 11 mo 7 days".   Going by the age that should be the son Mason, not a "dau.", so it may be a different Cook family.

At Findagrave.com, I've found possible memorials.  One for Washington Cook, buried in Potter Field, Omaha, died July 23, 1924.  That memorial has a note "Family: Mrs. Martha Misner.", but they are not linked.  William and Martha are buried in Wyuka Cemetery in Lincoln.  Martha died September 18, 1926 and William August 17, 1911.

That's all I've found on the Cook family and won't search for more unless I run across something.  Maybe next spring I can go to the Mt Zion Cemetery and see if there are some other Cook graves not mentioned in that listing.  If you are a descendant of Mathias and Mary, please leave a comment!

Posted by Laura Mattingly at 8:00 AM No comments:

Friday's Faces from the Past - One or Two Cute Kids? 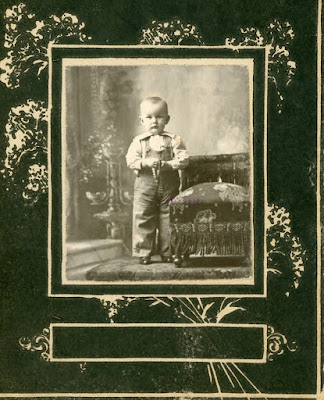 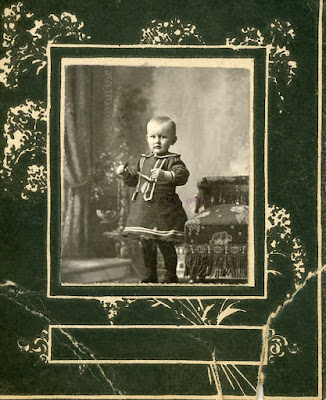 There are absolutely no clues as to the identity of these two kids.  I don't even know if these are two different kids (twins?), or maybe the same kid in different clothes.  They look so much alike.

As with other photos in my "Friday's Faces from the Past" posts, these were in the Old Trunk in the Attic.  Most likely the subjects were residents of the Harvard and Eldorado area in Clay County, Nebraska around 1900.  Or just across the county line near Stockham in Hamilton County.

They sure are cute.  If you think you know who they might be, please leave a comment!

Posted by Laura Mattingly at 5:45 AM No comments: 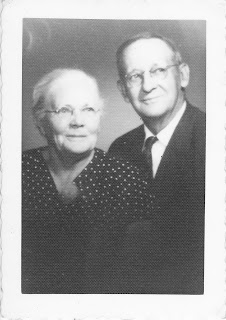 My Great Grandpa Albert Menke was born 129 years ago today, November 7, in 1886.   His first name was actually Charles, but he went by his middle name.  He is the first of six generations of Menke boys with the name Charles (either first or middle), but none of them goes by that name.

He must have known all about large families.  He was the youngest of the 11 children of Henry & Eliza Menke (with four other half siblings who were grown by the time he was born).  Then he was the father of 13 children with his wife of 59 years.  On October 18, 1906 he married Charlotte Roscoe at the home of her parents in Clatonia, Nebraska.

Albert lived and farmed in Gage County Nebraska his entire life and at age 78, on September 16, 1965 he passed away.  His family at that time included his 12 children, 34 grandchildren, 18 or 23 great grandchildren and two sisters.  Two different obituaries have those different great grandchildren figures and I haven't determined yet how many would be correct at that point.  At any rate, he left a large family.


Posted by Laura Mattingly at 5:45 AM No comments: