Friday's Faces from the Past - Georgie Sloat 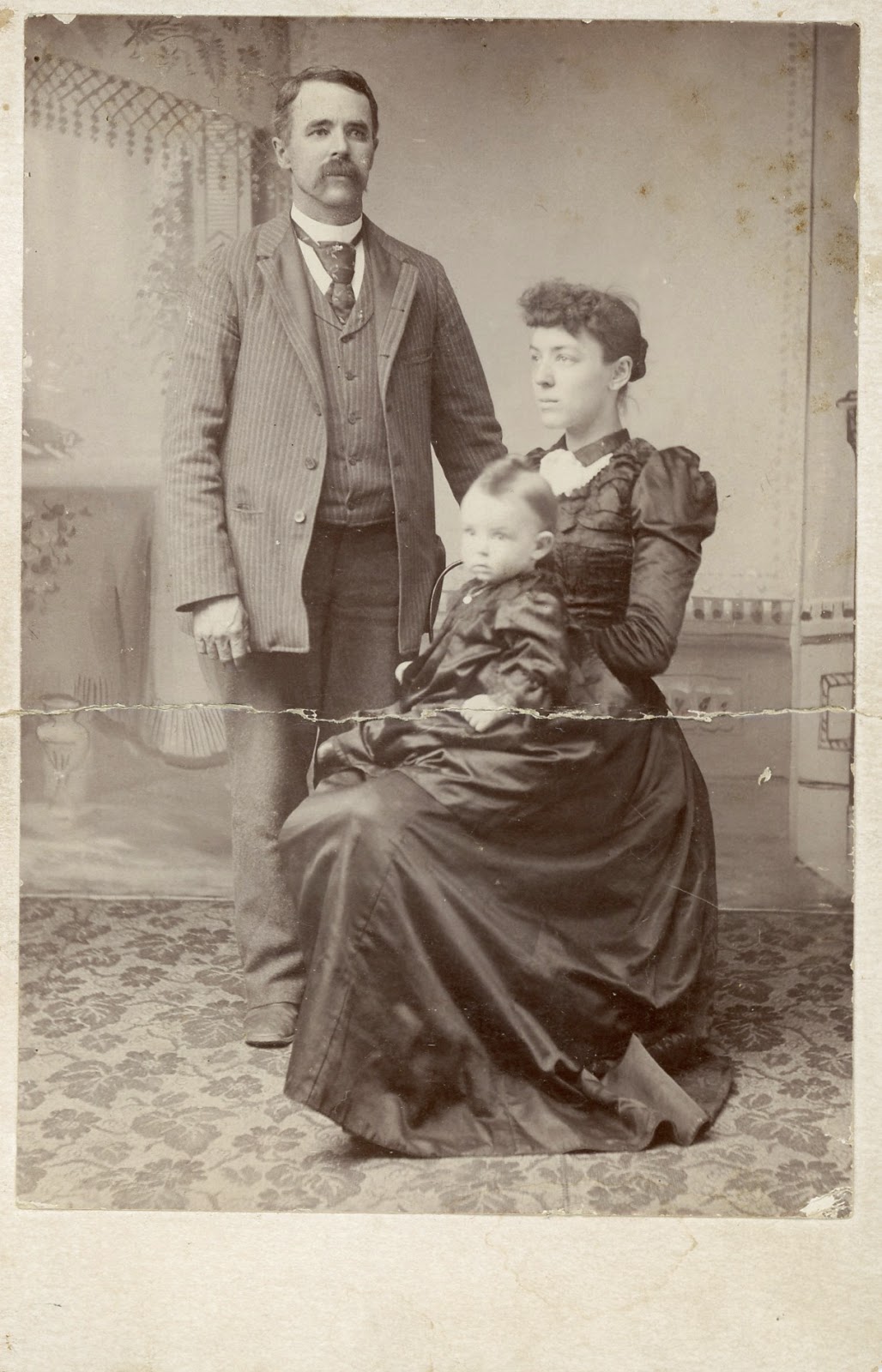 "Georgie Sloat" is all that is written on the back of this photo.  Which person is Georgie?  There are several George Sloats in the 1900 and 1910 census, but none who are living in Nebraska.  Since this photo was among the possessions of my Great Grandmother Sadie McGrath, I assume she knew them somehow.  She lived in Nebraska from the time she was about 6 years old until she died in 1958.  Without more information to go on, I wouldn't know how to find this family.  There is no studio or photographer's name and the back is blank except for the written name.

If you have the name Sloat in your family tree, please leave a message.   Maybe together we can figure out who Georgie Sloat is.

Albion, Nebraska became the county seat of Boone County in 1873.  It's peak population was in 1940 with 2,268 citizens.  There are issues of the Albion Weekly News as early as 1897 on microfilm only.  Whether or not Albion's newspaper will ever be digitized would be hard to say.  Here's just a little news from 1915. 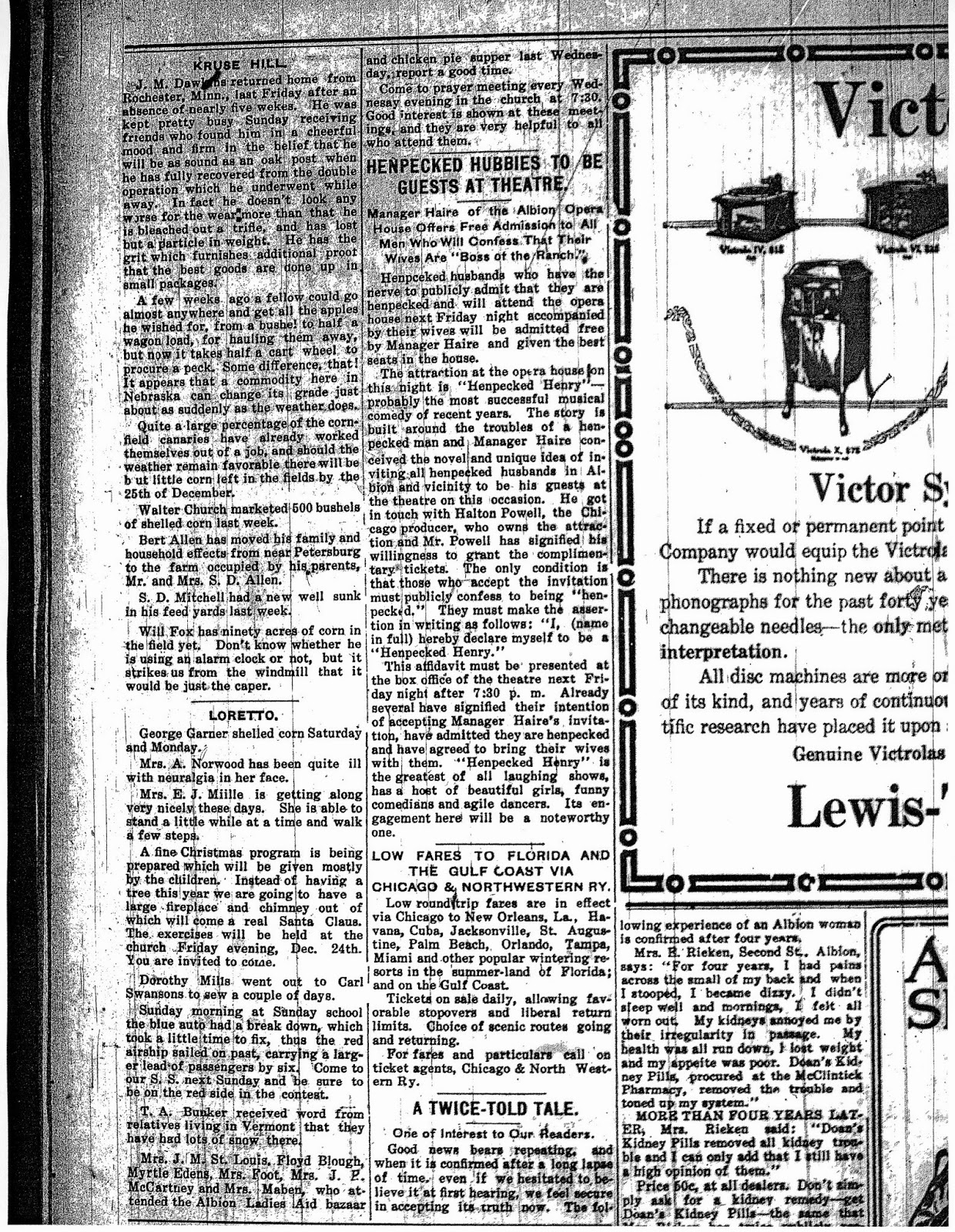 J. M. Dawlons returned home from Rochester, Minn., last Friday after an absence of nearly five weeks.  He was kept pretty busy Sunday receiving friends who found him in a cheerful mood and firm in the belief that he will be as sound as an oak post when he has fully recovered from the double operation which he underwent while away.  In fact he doesn't look any worse for the wear more than that he is bleached out a trifle, and has lost but a particle in weight.  He has the grit which furnishes additional proof that the best goods are done up in small packages.
A few weeks ago a fellow could go almost anywhere and get all the apples he wished for, from a bushel to half a wagon load, for hauling them away, but now it takes half a cart wheel to procure a peck.  Some difference, that!  It appears that a commodity here in Nebraska can change its grade just about as suddenly as the weather does.
Quite a large percentage of the cornfield canaries have already worked themselves out of a job, and should the weather remain favorable there will be but little corn left in the fields by the 25th of December.
Walter Church marketed 500 bushels of shelled corn last week.
Bert Allen has moved his family and household effects from near Petersburg to the farm occupied by his parents, Mr. and Mrs. S. D. Allen.
S. D. Mitchell had a new well sunk in his feed yards last week.
Will Fox has ninety acres of corn in the field yet.  Don't know whether he is using an alarm clock or not, but it strikes us from the windmill that it would be just the caper.

George Garner shelled corn Saturday and Monday.
Mrs. A. Norwood has been quite ill with neuralgia in her face.
Mrs. E. J. Millie is getting along very nicely these days.  She is able to stand a little while at a time and walk a few steps.
A fine Christmas program is being prepared which will be given mostly by the children.  Instead of having a tree this year we are going to have a large fireplace and chimney out of which will come a real Santa Claus.  The exercises will be held at the church Friday evening, Dec. 24th.  You are invited to come.
Dorothy Mills went out to Carl Swansons to sew a couple of days.
Sunday morning at Sunday school the blue auto had a break down, which took a little time to fix, thus the red airship sailed on past, carrying a larger lead of passengers by six.  Come to our S. S. next Sunday and be sure to be on the red side in the contest.
T. A. Bunker received word from relatives living in Vermont that they have had lots of snow there.
Mrs. J. M. St. Louis, Floyd Blough, Myrtle Edens, Mrs. Foot, Mrs. J. P. McCartney and Mrs. Maben, who attended the Albion Ladies Aid Bazaar and chicken pie supper last Wednesday, report a good time.
Come to prayer meeting every Wednesday evening in the church at 7:30.  Good interest is shown at these meetings, and they are very helpful to all who attend them.

Posted by Laura Mattingly at 3:15 PM No comments:


Heinrich Knapp was born on Christmas Day in 1805 in Germany.  About 1846, he brought his family to America, settling in southern Ohio.  Heinrich, or Henry as he became in America, worked in the ore digging and mining industry.   By 1850 he was in Vernon Township, Scioto County, and by 1860 in Elizabeth Township, Lawrence County where his family remained for many years.  He died January 15, 1892 at age 86 in Powellsville, Ohio and is buried in St John's Lutheran Church Cemetery.  This short paragraph ran in the Portsmouth Daily Times on January 23, 1892.  Ancestry has several years of the Portsmouth Daily Times, but not for the year 1892.  The Portsmouth Public Library emailed me the page this was on, but they didn't find an obituary or death notice for Caroline. 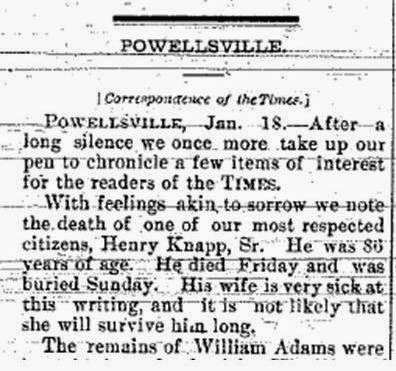 Heinrich and Caroline were married March 8, 1839 in Germany.  Their children were:

Louis Knapp was born in Hanover, Germany on September 8, 1840.  Louis followed his father into the Ore business.  There is a nice biography of him in "The History of Scioto County" written by Nelson Evans.  On January 25, 1865, he married Mary Fitzsimmons, at Empire Furnace, Ohio.  They were the parents of seven children:  Lizzie, May, Anna, Joseph, Charles, Ruby and James.  In August, 1882 he married Hannah Fitzer and they had 2 sons, John and Oliver.  Louis died in Cook County, Illinois on May 7, 1923 at age 82.

Elizabeth "Eliza" Knapp, my Great Great Grandmother, came into this world on May 15, 1841 in Wurttemberg, Germany.   She married Henry Menke on January 13, 1865 in Scioto County, Ohio.  She was the mother of 11 children:  Caroline, John, Mary, Matilde, Katherina, Eliza, Rosa, Edward, Nettie, Charles and Lewis.  Eliza lived to be 102 years old, dying in Lincoln, Nebraska on February 2, 1944.  She was survived by 30 grandchildren, 23 great grandchildren and one great great grandchild.

Henry Ernst Christian Knapp was born on September 22, 1845 in Hanover, Germany.  His first marriage was to Catherine Elizabeth Hobstettler with whom he had 10 children.  Catherine died in 1894 and Henry married Mrs. Elizabeth Mehl in 1896.  Henry's children were:  Adam, Fred, Henry, Callie, Charles, John, Jacob, George and 2 more whose names I can't read because of a smudge in the newspaper with his obituary.  There is a nice family photo on Henry's findagrave memorial here.

Mary Knapp shared a birthday with her brother Henry on September 22, born three years later in 1848.  She was the first child in the family born in the United States.  She was married to John W. Boggs on October 17, 1871 in Ohio.  They moved to Nebraska sometime before 1881.  Nine children were born to them:  Charles, George, Albert, Caroline, Rosa, Elizabeth, Walter, Jennie and Emma.  Mary died in Tobias, Nebraska on March 28, 1930 having reached 81 years old.  She was survived by 27 grandchildren and 16 great-grandchildren.

Hannah Charlotte Knapp was born March 23, 1849 in Clinton Furnace, Scioto County. She married Conrad Smith on February 6, 1869 in Lawrence County.  About 1893 they moved to Nebraska, joining her two sisters already there.  Their 11 children were:  Caroline, Frederick, Henry, Anna, John, Mary, Elizabeth, William, George, Carl and Viola.  Hannah died on September 5, 1928 in Garden County, Nebraska at age 79.  She was survived by 53 grandchildren and 27 great-grandchildren.

I want to find the German marriage record for Henry & Caroline, and birth records for their children.  Also any immigration record for the family.  I would like to get to Portsmouth, Ohio someday to do some work there and see the area where Henry Knapp's family once lived.

A few years ago I corresponded with a granddaughter of Hannah Smith and shared information with her.  It would be great to hear from another descendant of Henry & Caroline Knapp. 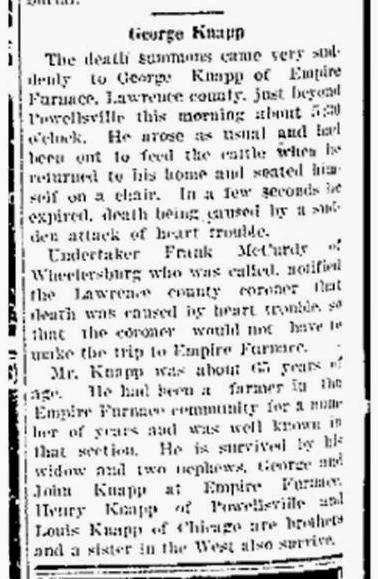 The death summons came very suddenly to George Knapp of Empire Furnace, Lawrence county, just beyond Powellsville this morning about 5:30 o'clock.  He arose as usual and had been out to feed the cattle when he returned to his home and seated himself on a chair.  In a few seconds he expired, death being caused by a sudden attack of heart trouble.

Undertaker Frank McCurdy of Wheelersburg who was called, notified the Lawrence county coroner that death was caused by heart trouble, so that the coroner would not have to make the trip to Empire Furnace.  Mr. Knapp was about 65 years of age.  He had been a farmer in the Empire Furnace community for a number of years and was well known in that section.

He is survived by his widow and two nephews, George and John Knapp at Empire Furnace.  Henry Knapp of Powellsville and Louis Knapp of Chicago are brothers and a sister in the West also survive."   from the Portsmouth Daily Times, December 20, 1921

Actually, George was survived by three sisters "in the West", Hannah Smith, Mary Boggs and Eliza Menke, all in Nebraska.  It seems he and his wife may not have had any children.

Posted by Laura Mattingly at 5:15 PM No comments: 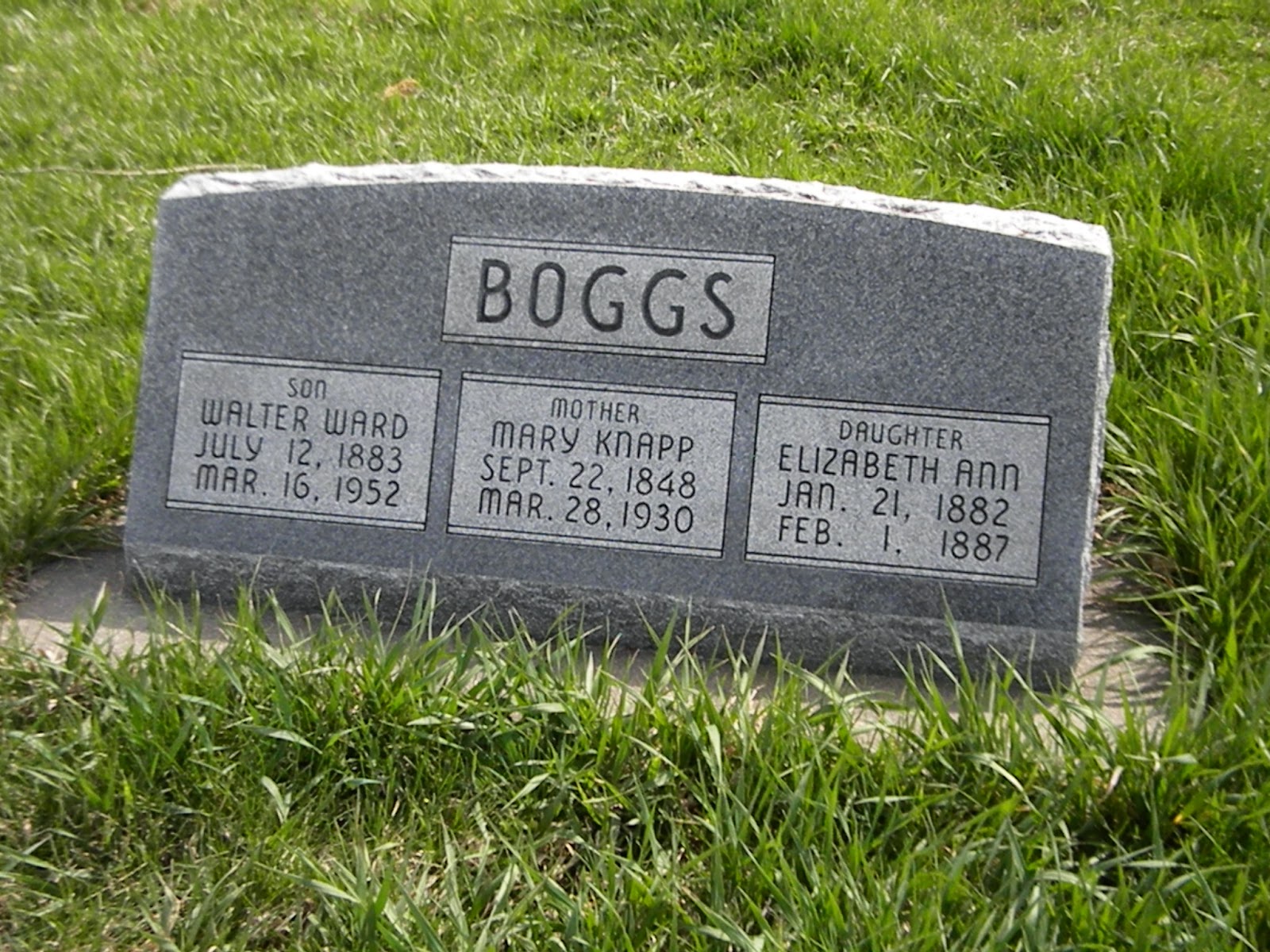 Mary Knapp Boggs is buried in the Clatonia Cemetery, Clatonia, Nebraska along with two of her children.  Daugher Elizabeth Ann was 5 years old.  Son Walter Ward was 68.    Her husband John died about 1903, but he doesn't appear to be buried in Clatonia.  I don't know when or where he died.

Mary was the daughter of Henry & Caroline Knapp and the sister of my Great Great Grandmother Eliza Menke.

Posted by Laura Mattingly at 8:15 PM No comments:

Friday's Faces from the Past - Jennie Kennedy 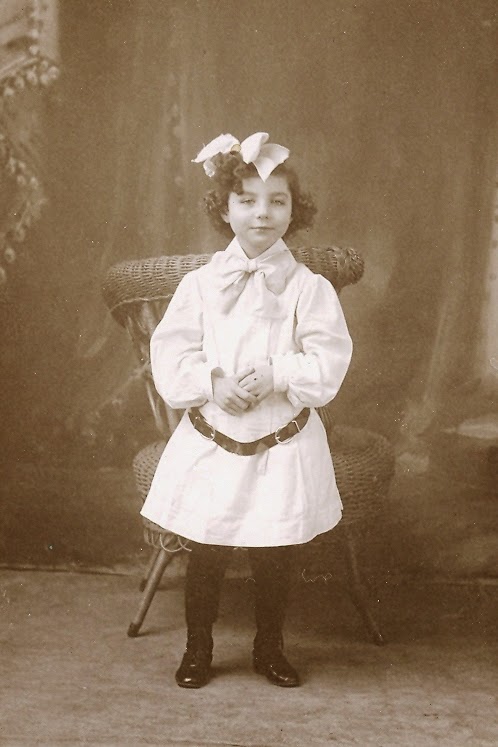 This photo was given to my Great Grandma Sadie Negley (that's her maiden name).  Sadie was not related to any Kennedy's that I'm aware of.  I assume Jennie's mother gave her this photo, but I have no idea who Jennie's mother was.  They may have gone to school together in Eldorado.  Maybe Jennie's Dad worked with Sadie's brothers for the railroad, I don't know. Without a little more information to go on, I can't find Jennie Kennedy in the 1910 census. 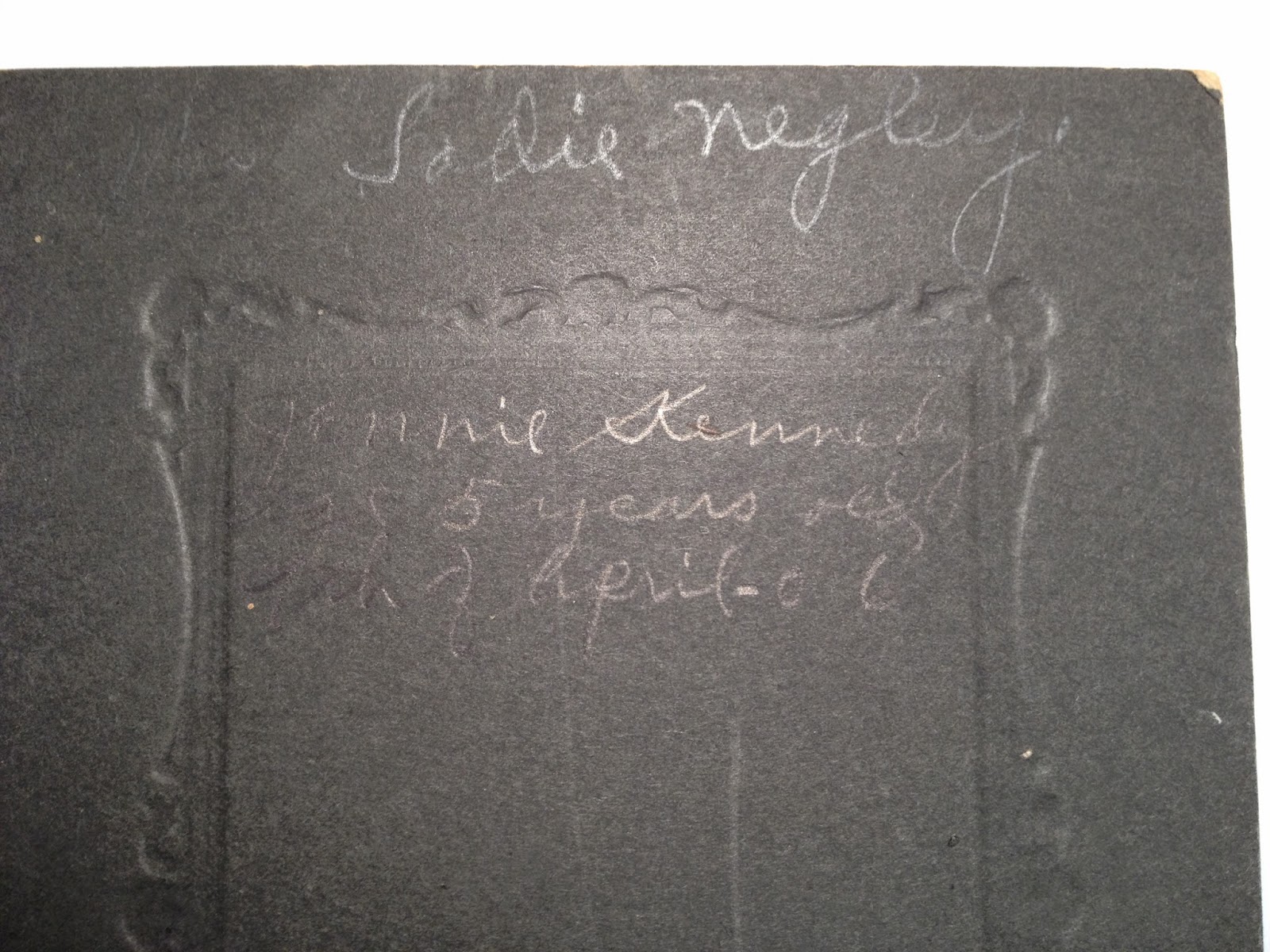 The photographer was Boatman of West Point, Nebraska
Written on the back:
"Sadie Negley
Jennie Kennedy
age 5 years old
9th of April, '06"

The date may be her birth date, or it may be the date of the photo.  West Point, Nebraska is over 100 miles away from Eldorado where Sadie Negley lived.  How expensive was it in 1906 to have a professional photograph taken?  How many copies did a person usually get, and who would they likely give them to?

Please leave a comment if you know Jennie Kennedy.  It would be great to find out how my Great Grandma Sadie knew her.