When I wrote about my second Great Grandmother Martha Bell in November of 2013, I mentioned how I wanted a photo of her daughter Laura Alcorn.  Laura's brother Cicero Bell is my Great Grandfather.  Well, it was quite a shock when one day last winter I saw in my Gmail Inbox a message from "Laura Alcorn".  Granddaughter of the original!  She found some things I had posted online about her Alcorn family and I am so thankful that she emailed me!  We shared some information on the family and so I asked her if she had a photo of Laura.  I was thrilled to get a few including these of Laura and Carson, obviously taken some years apart.  The corsage make me wonder if the photo of Laura was taken on her wedding day. 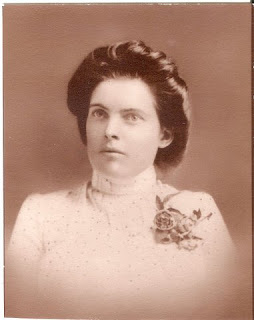 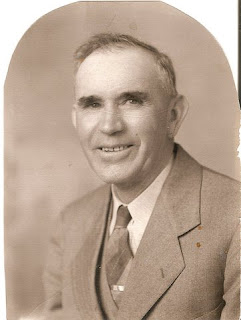 Laura Myrtle Bell was born August 4, 1879 in Wayne County, Kentucky.  She grew up living with her mother, Grandmother Rutha and two older brothers Cicero and John William.  After she and Carson were married, Laura's mother Martha lived with them until her death.

Laura and Carson were married on October 2, 1902 at Ruthy Bell's in Wayne County.  They were married by J. A. Alley, "M. G." (Minister of the Gospel).   Witnesses were J. A. Clemens and J. S. Stringer.  John Stringer was an uncle of Laura's, married to her mother's sister Elizabeth.  J. A. Alley may have been a distant relative.

Carson and Laura started their life together farming in Wayne County.  Their two oldest daughters were born there and that may likely be where sometime between 1906 and 1910 they lost an infant.  About 1911, they moved to Ionia, Kansas.  They farmed in Kansas until 1923, then moved to Giltner, Nebraska where they farmed for about six years.  That makes it right about the start of the Depression when they left the farm and Carson went to work for Harrison Nursery in York.  After World War II, he and his son Estel began operating a dry cleaning business in Grand Island which Carson retired from in 1953.

On November 22, 1955, Carson died at age 73 in Grand Island.  His final resting place is in Westlawn Cemetery.  Laura moved to Lincoln after his death and lived with her daughter Lena.  She died on February 27, 1972 at the age of 92.  She is buried beside her husband.

Friday's Faces from the Past - Elvie and Elwin Megrue 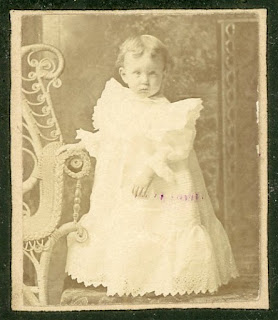 Written on the back of these photos from the Old Trunk in the Attic is "Elvie Mae Megrue age 14 month"  and "Elwin Elsworth Megrue 10 weeks old when taken".   Easy!  I found in the 1910 census, Elvie, age 9 and Elwin, 6, lived in Howard Ward 1, Clay County, Nebraska with their parents Andrew and Emma and one older sister named Faye, age 13.  Cut to the chase, I also found Elvie's memorial at Find A Grave in the Harvard Cemetery.  She died April 1, 1924 not quite reaching the age of 24 years old and it appears she never married.  I posted her photo there.

But maybe Elwin has descendants who would love to have these photos. 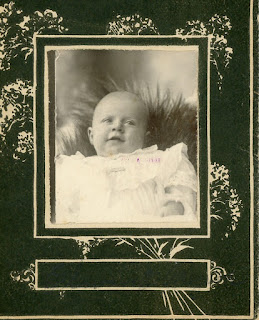 There are no Elwin Megrue's listed at Find A Grave.  In the 1940 census, Elwin is 36 years old and single, living with his parents in Kimberly, Idaho.  I've learned that many people from around Eldorado, Nebraska moved to that area of Idaho for jobs in the logging industry.  The Social Security Death Index lists an E. Megrue who died in April of 1987 at age 84 in Twin Falls, Idaho.

His oldest sister, Vernie Faye was married to Gerald Morrow Ferguson on September 30, 1927 in Boise, Idaho.  Gerald has a memorial at Find A Grave in the Sacramento County Veterans Memorial Cemetery, but it doesn't look like Vernie is there.

As for the parents Andrew and Emma Megrue, Andrew died May 26, 1948 and is buried in Harvard, Nebraska.  Emma died in Idaho but I have no burial information.  She may be in Harvard also, I'll look the next time I'm there.

So whether or not there are any descendants of Elwin or Vernie Faye I can't say for sure.  If anyone who reads this knows something, please leave a comment.  These photos belong with family.

Posted by Laura Mattingly at 3:30 AM 4 comments: 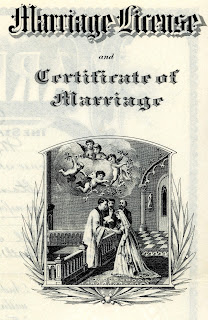 January 1 is a popular wedding day in my family tree.  There are a total of 56 January marriages in my database and six of them are on January 1, the most of the whole month. "New year, new beginnings".  I don't know if you could get anyone to marry you on New Year's Day nowadays.  Maybe those chapels in Las Vegas are open for business.

Several of my direct ancestors were married in the month of January.  The majority of these are on my paternal side.  I  am working on getting the documentation for all of them yet.

My second Great Grandparents, Henry Menke and Eliza Knapp were married on January 13th in 1867. Both of Henry's daughters and one son from his first marriage were also married in the month of January.


Mattingly ancestors that I have January wedding dates for in my tree are all on my husband's maternal side.  His grandparents, Mark Thomas Spalding and Cora Lulu Spalding were married on January 10, 1910.

The weather is very often a determining factor when choosing a wedding date for people today.  Most of these weddings mentioned here took place in northern states like Massachusetts, Connecticut and Maryland where it was surely cold in January.  Apparently that wasn't a factor.