In June of 2017, I visited the grave of my Danish immigrant Third Great Grandfather, Ole Jorgenson. He was buried in the Peotone Cemetery, less than five miles from the land he had once owned there in Will County, Illinois. The cemetery has over 4000 graves and no directory on site. There are a lot of shade trees, but we were there on a sultry summer day walking the entire cemetery looking for graves. We were on vacation, it was the only chance I've had to visit these graves. 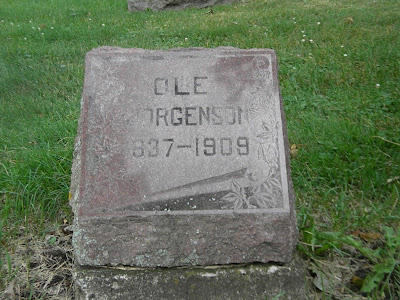 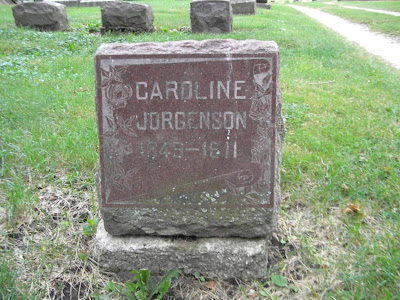 Ole is Lena Roscoe's father, but her mother died in Denmark before 1866. Caroline is Lena's stepmother, likely the only mother she could remember. All six of Lena's siblings are actually half-siblings.

Denmark would be a great place to visit someday. I have some work to do before I get the chance to visit Lena's mother's grave. Starting with learning her name.


Setting on a hill just west of the village of DeWitt, Nebraska is the Oak Grove Cemetery. It's a good sized cemetery, with over 1900 graves. The old iron entrance sign remains in place without a fence to separate the old section from the new. The grave of my Third Great Grandparents, David and Mary Roscoe, is just inside that old entrance sign.

David died within five years of moving to Nebraska from Will County, Illinois. Mary got married again, became a widow a second time, and at her death 39 years after her first husband died was laid to rest beside him in Oak Grove. On the opposite side of David's inscription is only "Mother" and her birth and death dates, no name. I even tried using aluminum foil (I don't recommend trying that on a windy day) to see if there was an inscription that had faded, but there wasn't. 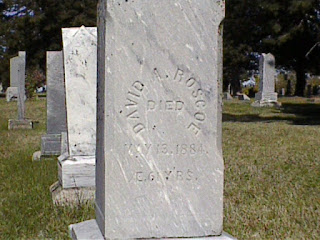 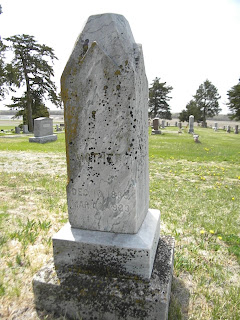 David and Mary were blessed with 10 children. Daughter Martha Roscoe, predeceased both of her parents in 1875 at age 18 before the family moved to Nebraska. When I was in Peotone, I searched for but found no sign of her grave.

In Oak Grove, along with the parents, lies son Ervin Ward Roscoe who died in 1886 also at 18. In the 1880 census it's noted he has rheumatism, and in 1885 he is "disabled". For some reason Ervin W has two stones beside each other there in Oak Grove.

The grown children moved to different parts of the country, and in the end, their graves are located in six different states.

Along with Martha in Peotone is the only other daughter, Nancy Baird's grave. Two sons resting in Nebraska are William Roscoe who is buried in Clatonia, and George Corbin Roscoe, who lies in Swan Valley Cemetery, just ten miles from DeWitt.

David Roscoe's mother's grave is in the Peotone Cemetery. I looked for it when I was there, but didn't find it. There is a photograph that was posted on Find A Grave in 2014 and the stone is broken in half. By 2017, it might have deteriorated more and was beyond finding.

Visiting any more of my Fourth Great Grandparents in this branch of the family would mean air travel for me. David's father Russell Roscoe is buried in the Town of Frankfort Cemetery in Frankfort, New York. The graves of Mary's parents, Isaac and Philomena Fero, are unknown to me but would also be in New York. Maybe someday... 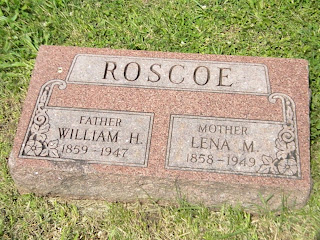 Three sons are also buried in the Roscoe plot. Frank has a military marker for his service in the Navy during WWI. Oliver served in WWI and died of the flu just a day after coming home from the army. He has two markers, one is the military stone. David Harlow Roscoe is buried there, but he has no marker. David was mentally challenged.

In the Oak Grove Cemetery in DeWitt, Nebraska about 10 miles away lie two more sons of William and Lena. Cecil Marvin Roscoe at age 5-1/2 died of pneumonia. Charles E Roscoe died in 1913 and has no marker. Charles committed suicide in the same month as his 22nd birthday. It makes me wonder if the reason David and Charles don't have grave markers has anything to do with their mental health issues.

The oldest child of William and Lena, Laura Kyle, lived most of her married life in Carman, Manitoba, Canada and is buried in the Greenwood Cemetery. Another son, Cleve, is laid to rest in Lincoln Memorial Park, in Lincoln, Nebraska. He was married, but had no children. All of William & Lena's 21 grandchildren were born to their daughters except one - a daughter was born to Frank Roscoe just a few months after his death.

The grave of William's parents is in Oak Grove Cemetery in DeWitt. Lena's father is buried in Peotone, Illinois. Her mother would be buried somewhere in Copenhagen, Denmark. If I knew her name and could find her grave, it would be great to be able to visit it someday.


The first loss in the Henry Menke family since moving to Nebraska was their son Lewis, at only a few days old in 1885. He was the first family member laid to rest in the Clatonia Cemetery. The tall monument tombstone they purchased is inscribed on the east side of the stone: "Lewis son of J H & Elisa Menke, Died Feb. 5, 1885 Aged 8 days".

Next to the tall stone are the flat markers simply inscribed with the names and dates of my Second Great Grandparents, Henry Menke and Eliza Menke. 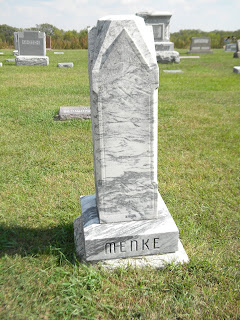 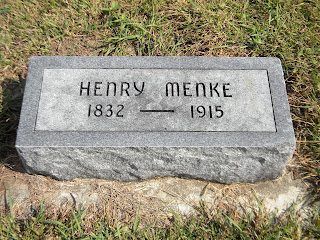 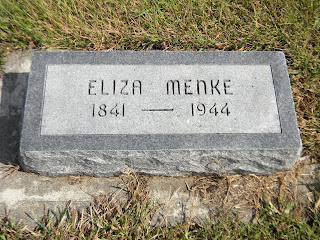 Another infant son, John, died in Ohio in 1869. His grave if it had been marked has probably long been lost to the elements. Along with Mary and Lewis, five other children are also buried in Clatonia - C Albert, Rosa Wayman, Carrie Kloepper, Katie Wayman, and Nettie Steinmeyer. George Edward Menke moved to Missouri and is laid to rest in an unmarked grave in Franklin County, Missouri. Matilda Daubendiek is buried in West Bend, Iowa. Eliza Keine died in Palm Springs, California and was cremated, her ashes scattered "at sea".

Henry had four children from his first marriage to Mary Neuhaus (or Niemeyer?). The oldest daughter, Emma Warner, stayed in Ohio when the rest of the family moved west. She is buried in Long Run Cemetery, Rubyville, Ohio. John Frederick came to Nebraska for a few years, but then went back to Portsmouth where he ran a grocery business for many years. He is buried in the Greenlawn Cemetery in Portsmouth, Ohio. I know from a small paragraph in the Portsmouth Daily Times that he made the trip to Nebraska to attend his father's funeral.

Henry Menke Jr preceded his father in death. He had spent several years preaching in Missouri, Iowa and finally Michigan where he died and was brought home to be buried. Henry Sr's youngest daughter, Lizzie Scheidt, is buried in Friend, Nebraska about 30 miles from Clatonia.

Henry Menke died in 1915, his wife Eliza died at age 102 in 1944. They were married for 48 years, she was widowed for 29.  Eliza's parents are resting in the St John Lutheran Church Cemetery in Scioto County, Ohio. Henry's parents are likely buried somewhere in that vicinity, but I don't know the location.

The One and Only Clatonia Cemetery


Clatonia Cemetery about 100 miles away from me, is located just outside the village of Clatonia, Nebraska. To my knowledge, there is no other town in the country, nor any other cemetery in the country with that name. It's not a very large cemetery and is still currently being used. I think I was first there in the 90's, some photos I have were from my old 35mm Canon. I've been back a few times.

The graves of several family members are there including my Grandpa's parents, Albert and Lottie Menke. Her birth year is inscribed as 1888, but I believe it should be 1887. I didn't attend the funeral for either of them. In fact I don't ever remember seeing them. My Grandpa's family didn't get together much. 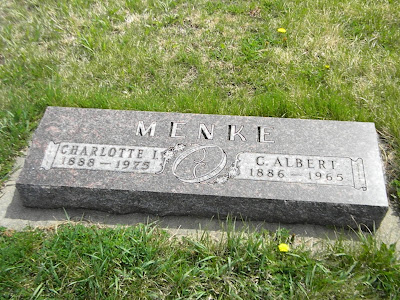 Of their thirteen children, four are also buried here, two more are in Prairie Home near Diller, one in the Oak Ridge Cemetery in DeWitt, one is in Bellevue, Nebraska, one in California, one in Florida, one in Iowa and one in Kansas. The youngest child is still living. With a family spread all across the country like this, it's no wonder they didn't get together much.

Both of their parents are also buried in this cemetery. Lottie's parents are William and Lena Roscoe. Albert's parents are Henry and Eliza Menke.
Posted by Laura Mattingly at 6:00 PM No comments: