Friday's Faces from the Past - Gertrude 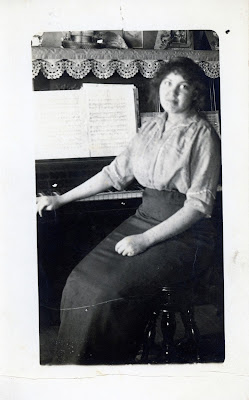 "Gertrude" sent these postcards, each with this photo, to both my Great Grandmother Sadie (Mrs. Art McGrath) and her sister Alice Negley.  They must have been enclosed together in another envelope, these aren't stamped or fully addressed to have been mailed. Her longer message to Alice says she was working at a hotel, but no mention of the location. There's no date here, but Sadie married Art McGrath in 1908, Alice never married.

These postcards were in the Old Trunk in the Attic, among other things that at one time belonged to either Sadie or Alice, or both.  I'm sure Gertrude is not a relative, but a good friend of both Sadie and Alice.  I was looking through some transcribed obituaries I have that came from a scrapbook put together by someone in the Negley or McGrath family, and I found an obituary for Ezra Ayer who had a daughter named Gertrude.  So I looked at the 1900 census for Gertrude Ayer and found her in Eldorado.  She was the same age as Sadie Negley.  They went to school together in Eldorado. 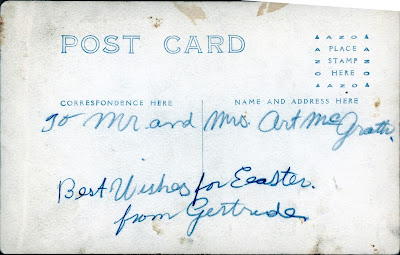 Clara Gertrude Ayer married Carlton Henry Wood about 1902.  They had two daughters, Emma Gertrude and Vivian Effie.  For two decades, they all lived in Iowa and Nebraska together until 1930 when Carl and Vivian disappear.  Gertrude and Emma are living with Gertrude's parents in Aurora, Nebraska.  In 1940, its just Gertrude and her father in Aurora.  From his obituary I learned that one of Gertrude's daughters was Mrs. Arthur Childers of California which lead me to find that Gertrude died in California in 1959.  She is buried near her parents in the Harvard, Nebraska cemetery. 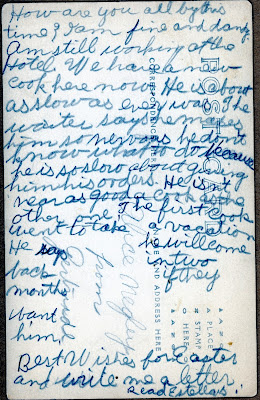 "How are you all by this time?  I am fine and dandy.  Am still working at the Hotel.  We have a new cook here now.  He is about as slow as ever was.  The waiter says he makes him so nervous he don't know what to do because he is so slow about giving him his orders.  He isn't near as good a cook as the other one.  The first cook went to take a vacation.  He says he will come back in two months if they want him.  Best Wishes for Easter and write me a letter.  Read Estella's"

"Read Estella's"  is that present tense read or past tense read?  And who is Estella?  Stella Rath was another Eldorado student in the late 1890's, maybe that's who Gertrude was referring to.


I can't be absolutely sure that the postcard photo is Clara Gertrude Ayer Wood, but it's very possible it is her.  If you know Gertrude, please leave a comment below or send me an email.

Posted by Laura Mattingly at 3:30 AM No comments: 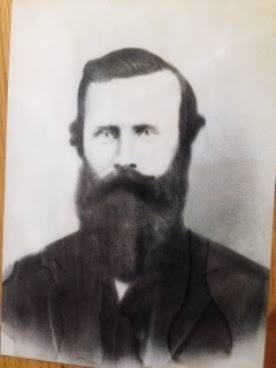 Robert I. Boone was born August 1, 1837 in Nelson County, Kentucky the son of Christopher Boone and Ann "Nancy" Rhodes. Elizabeth Johnson, daughter of James Matthew Johnson and Charlotte Ballard was born about 1855 in Nelson County.  I found this hand-written permission slip at Family Search - 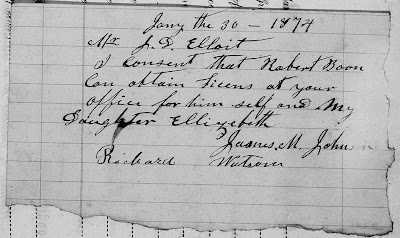 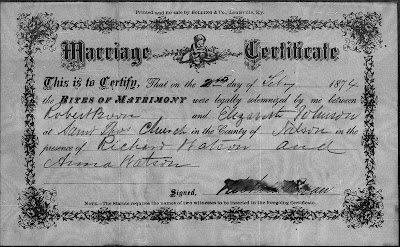 Also at Family Search was this pretty Marriage Certificate.  Robert and Elizabeth were married on February 3, 1874 at St. Ivo's Church in Nelson County by Nicholas Ryan.  Witnesses were Richard and Anna Watson.


Robert died on February 10, 1900 just a few days past their 26th wedding anniversary.  He was 63 years old.  Elizabeth died January 17, 1933 at about 78 years of age.  They are both buried in St. Dominics Cemetery, but Elizabeth's grave is unmarked.

Together they farmed and raised 9 children: 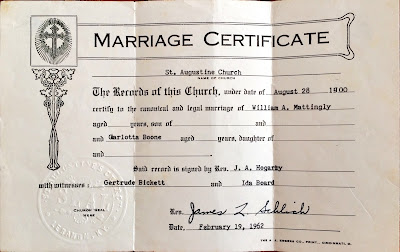 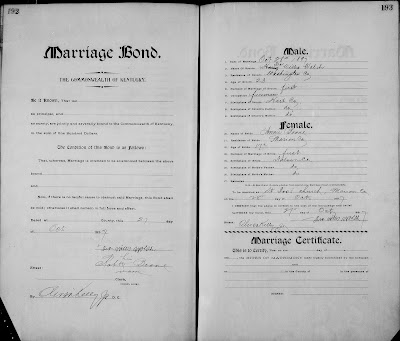 4. Margaret "Maggie" Boone - born about 1882.  She married Robert Harris September 28, 1902 in Washington County.  Family Search has this copy of the marriage register.  I haven't found any census records for them either, the name is just too common. 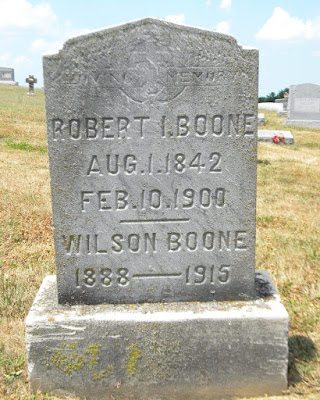 7. James Robert Boone - born April 6, 1891.  He married Mary Virginia Greene-Mackin, widow of Michael Makin who died in 1924.  From Ancestry, on his WWI draft registration he was a single farmer in 1917 taking care of his mother and sister.  He died December 26, 1974 at age 83 and is buried in St Dominics Cemetery. 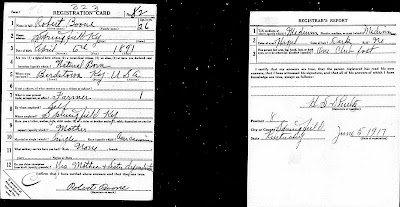 8. Elizabeth "Lizzie" Boone - born 1893 and died September 6, 1959 at age 66 in Danville.  She remained single throughout her life and spent many years living in the State Hospital for the Insane.  She rests in St Dominics Cemetery. 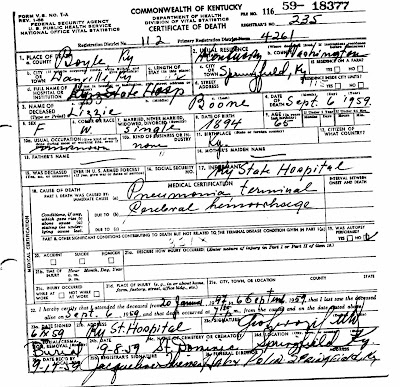 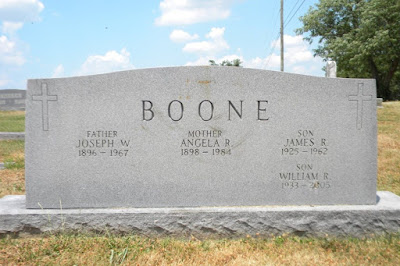 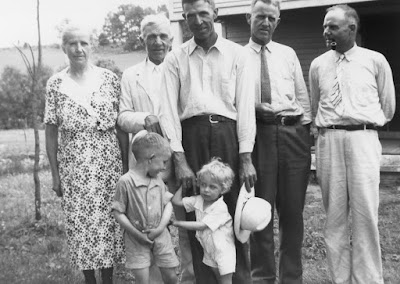 In this picture is Lottie Mattingly, Nick Boone, Joe Boone, Henry Boone and Robert Boone.  The two boys in front are Billy and Ben Boone, who I believe are the youngest sons of Joe.  If that is correct then the photo was taken about 1937.


Posted by Laura Mattingly at 10:00 AM No comments:


Mentioned in this clipping, Mr. and Mrs. O. (Ole) and Caroline Jorgenson are my Third Great Grandparents.  Their daughter, Mrs. J. O. Bentall was Alberta (Bertha) Carolyn Jorgenson who married Jacob O. Bentall in 1905. In 1920, Bertha and her son Carlton, were living in Los Angeles with her sister, Belle and Belle's husband Earl McKee.  Bertha died in Evanston, Illinois in 1968, her obituary states she was a retired public school teacher.

Mrs. John R. Daley and children are visiting with Mrs. Daley's relatives at Versailles, Ill.
Leroy Crawford went to Manteno Tuesday evening for a couple of days' visit with relatives.
Mrs. H. D. Crawford visited her parents and other Manteno friends Wednesday and Thursday.
Mrs. A. Lutz, who recently underwent an operation for appendicitis, returned home Saturday.
Mr. and Mrs. George W. Adams visited their son, William, in Chicago several days this week.
Roy D. Lewis of Wheaton, visited at the home of his parents, Mr. and Mrs. J. B. Lewis, over Sunday.
Stanley Arnold returned last evening from Culver, Ind., where he has been attending the military academy.
Mrs. H. W. Miller, of Cedar Rapids, Ia., is the guest of her sisters, Mrs. A. Ginter, Mrs. Dewitt Williams and Misses Hayward.
Thomas Collins visited his daughter, Mrs. Spencer Lees, of Chicago, Sunday.  Mrs. Collins spent several days this week with her.
Mr. and Mrs. Thomas Goldsberry were guests of their son, Walter, at the Dunlop home the first of the week and attended the commencement exercises.
Miss Nellie Adams has returned to Peotone, after a visit of several months with Mr. and Mrs. H. P. Tobias of Bronwsville, Tenn.  Her health is much improved.
Mrs. J. O. Bentall, who was a guest at the home of her parents, Mr. and Mrs. O. Jorgenson, returned to her home in Chicago Wednesday.  She was accompanied by her mother.
Judge and Mrs. Geo. Cowing and chldren, A. B., Fred, and Miss Addie Cowing of Joliet, came over to attend commencement exercises and were guests at the home of Mr. and Mrs. A. H. Cowing.
Mr. and Mrs. W. C. Lyon, of Waverly, Kans., are guest of Mr. and Mrs. S. D. Baird and family.  Mr. Lyon lived in this vicinity many years ago and was a prominent worker in the Methodist society.
Miss Agnes Oliver, of Wilton, and Misses Mable Kurtz and Sarah Stassen of Peotone, are three enterprising young teachers who are taking the summer course in the Normal school at Bloomington.
Mrs. M. M. Dennis entertained Mr. and Mrs. L. C. Whitsun and children, of Manhattan and Mrs. L. Whitsun, of Chicago, Monday.  Mesdames Whitsun are Mrs. Dennis' sisters and were here to attend the graduation exercises.

Posted by Laura Mattingly at 12:00 PM No comments: