Mary, first wife of my Second Great Grandfather Henry Menke (1832-1915), was born in Germany about 1835, and died at about 30 years old. They lived in Scioto County, Ohio. Her last name is either Niemeyer or Neuhaus, I've seen it both ways and more. Had she not died so young, I would not be here. Henry's second wife Eliza is my Second Great Grandmother.

In a biography published about Henry in "The History of Gage County, Nebraska" by Hugh J. Dobbs, it says he "wedded Miss Mary Niemeyer of Ohio, she having been born in Germany...".  That biography was published in 1918, over 50 years after her death.  In Henry's obituary which was in 1915, she is called "Maria Neuhaus" and it says they had five children. I only know of four.

In an article from the Portsmouth (Ohio) Daily Times also written in 1915, about Henry and Mary's son John Frederick (1859-1938), it says "He was born in Hanover, Germany, the son of Henry Menke, a farmer, who is still living in Gales [should be Gage] county, Nebraska, at the ripe old age of 82 years.  His mother, Mrs. Emma Niehaus-Menke, died when he was seven years old.  He was only 3 months old when his parents started for this country and six months old when they landed in Baltimore, having been on the ocean for 11 weeks and 3 days."  According to this, they should appear in immigration records in 1859, but I can't find them. John Frederick's obituary in 1938 refers to his mother as Mary Niehaus.

Mary died six years later in 1866, most likely in Scioto County. I've read that there was a cholera epidemic there about this time.  It's also possible that she died giving birth to the fifth child I'm missing, and the child died also. I've never been able to find an obituary or burial place for this Mary Menke (there are others).


Daughter Emma (1857-1929) the oldest child of Henry & Mary, was about 10 years old when her mother died.  She was born in 1857 and given the name Mary Ellen, but always went by Emma. In the 1870 census at age 13, she is not living with Henry, his second wife Eliza and the rest of the family. Several years ago I corresponded with a descendant of Johann Friedrick Menke (1817-1879) & Anna Maria Klara Richter (1816-1891), who she said had "adopted Maria Emma Menke born April 23, 1857 in Hanover.  She was a daughter of a Wilhelm and a sister to Fred Menke, the grocer.  Emma married January 17, 1875 to William Warner."  Whether or not the adoption was actually an official one or not, I don't know. Johann Friedrick is too young to be Henry's father, but possibly could be a brother. This marriage certificate for Emma and William Warner is dated January 17, 1875, and it has Henry Menke as her father.

Emma and William had nine children: Essie, Ella, Jesse, Carl, Pearl, Jacob, John Fredrick, Mayme and William. They later divorced.  Emma died in June, 1929 several months after suffering burns when her clothes caught fire from a gas stove.  She was 73 and is buried in Long Run Cemetery, along with John Friedrick & Anna Maria Klara Menke.

Henry & Mary's son John Frederick was a grocer in Portsmouth, Ohio for over 33 years. From an article in the Portsmouth Daily Times (June 6, 1915) about his successful grocery business:  "Mr. Menke prides himself upon one thing, and that is that he never sold on Sundays during his 33 years in business, with one single exception and that was the one Sunday during the 1913 flood.  He recalls with much pleasure that one day he refused one of his best customers a can of peaches which she wanted to buy on Sunday after unexpectedly receiving company.  He expected her to quit, but a few days later, to his great surprise, she called around and assured him that she thought more of him than ever.  This all goes to bear out the fact that a "grocer does not have to sell on Sundays," says Mr. Menke."

But first he was a school teacher in Gage County, Nebraska in 1880. Apparently he soon went back to Ohio. In 1881, he married Anna Strehle and they had seven children: Emma, Ruth, Katie, Clara Nellie, Floyd H, Carl F, and Howard Emmanuel. I don't know if these children ever saw their Grandfather Henry since he lived in Nebraska, but J F did get to his father's funeral in Clatonia.


Henry & Mary's son Henry Jr (1862-1912) became a Presbyterian Pastor. He died in Michigan in 1912. I've written about Henry Jr before, which you can read here. I didn't include this obituary last time.

"Rev. Henry Menke
The sad intelligence has been received in this city of the death of Rev. Henry Menke, a brother of Grocer J. F. Menke.  Death overtook the former Scioto countian at a hotel at Cassopolis, Mich., according to a message received by the Menke family, but failed to give the immediate cause of his death.
Mr. Menke visited his brother in this city during the month of August.  Being an ordained minister of the Presbyterian church, while in attendance at the United Brethren church in this city, he delivered several interesting talks.
The deceased was 51 years of age and unmarried.  Besides his brother, J. F. Menke, the local grocer, he is survived by an aged father, located at Friend, Nebr.  Mr. Menke left immediately for Cassopolis, to take charge of the remains and to convey them to the former home of the deceased at Friend, Nebr.
Rev. Menke a number of years ago, was located in Scioto county and Lawrence county.  During the later months of his life he suffered with stomach trouble.  Only recently he underwent an operation for appendicitis.  It is thought that the death was the outcome of the operation."  Portsmouth Daily Times, Wed., Sept. 4, 1912

Henry & Mary's daughter Mary Elizabeth (1864-1924) went by "Lizzie". Born in Ohio, she was married to John Scheidt in Saline County, Nebraska, on January 1, 1885. Her mother Mary's maiden name is "unknown" on this license (top portion not shown). Lizzie & John Scheidt had six children: Emma, Carrie, Ellen A, John, George and Eddie. Lizzie & John are laid to rest in the Andrew Cemetery in Friend, Nebraska.

Friday's Faces from the Past - Unidentified Couple #1 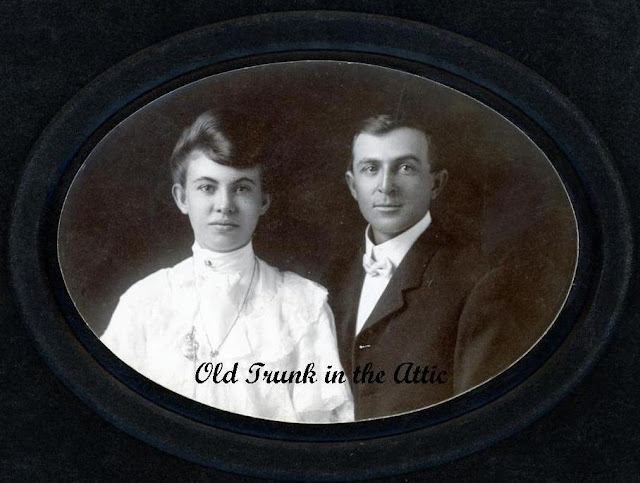 There are no names, no date, no photographers logo on this one. Google Image search came up with nothing.  They're VERY nicely dressed, like maybe for a wedding?  I've cropped out most of the black frame, the original is 8" x 6-1/8".

As with several other of my "Friday's Faces from the Past" posts, this photo was among the personal possessions of the Negley family from Eldorado, Nebraska. It's hard to say exactly who it belonged to for sure. I think there's a good chance this couple (or one of them) was a schoolmate of my Great Grandma Sadie Negley and her siblings. The following list of students enrolled in 1895 in the Eldorado school doesn't include their grade or age (If I can find the time, I'll work on that!).  I've included the ages of the Negleys.  It's just a possibility that the people in this photo are in this list.


There's also a chance this couple was from towns around Eldorado, like Stockham, Harvard, Aurora or Giltner.  For more of my "Friday's Faces from the Past" click on the label below, or see my Pinterest board - Clay/Hamilton County, Nebraska Old Photos.

If you have any of the above names in your family tree, take a close look at the photograph and see if this couple looks familiar.  Leave me a comment if you have any clues.

Email ThisBlogThis!Share to TwitterShare to FacebookShare to Pinterest
Labels: Friday's Faces from the Past, Nebraska, Negley

STOCKHAM
From our regular correspondent

Markets: Wheat, 55c; corn, 30c; rye, 40c; oats, 18c; hogs, $4.60; cattle $-.--; butter 12-1/2c; eggs .07c; chickens, 10c.
Miss Anna Brown has returned from her visit at Phillips.
Dr. Gordon was an Aurora visitor on Tuesday of this week.
Mrs. T. W. Cavett and Miss Josie were shopping in Aurora, last Saturday.
Dr. and Mrs. Caulk of Aurora were in town, Monday, calling on old friends.
Mr. Patton of Edgar spent the Fourth in our village - the guest of Miss Carson.
A picnic crowd of young people from Aurora were enjoying themselves on the Blue, Sunday.
Our band did itself great credit on the Fourth and added much to the enjoyment of the day.
A. J. McConaughey returned from Iowa, last week, where he had been for the past two months.
Mr. and Mrs. W. Flickenger of York came to Stockham, on the Fourth, to celebrate and visit with old friends.
Miss Negley of Eldorado is assisting Mrs. Wineman through the harvest work. Mrs. W. is in very poor health at present.
Editor Chambers of the Stockham Standard attended the Bryan and Stephenson ratification meeting at Lincoln, last Tuesday.
Chas. Evans and wife returned, Saturday, from an overland trip to Red Cloud, where they spent the Fourth with a brother of Mrs. Evans.
The population of our town has been increased one, at least, since the census was taken - a daughter has been added to the household of P. L. Yost and wife.
Today (Wednesday) is the birthday of Miss Mattie Cavett, and invitation are out for a party at her home, this evening. Her young friends are anticipating a very pleasant time.
Threshing has commenced, and the whistle of the engine now disturds our early morning slumbers. There were five machines running, Tuesday, within a radius of five miles.

Posted by Laura Mattingly at 3:30 PM No comments: