Saturday Night Genealogy Fun - Most Census Records for an Ancestor

“Saturday Night Genealogy Fun”  is a feature of Randy Seaver’s Genea-Musings blog.  I’m participating in this week’s challenge, which is:

"1) Do you know which of your ancestors appears the most times in the Federal Census records?  How many years?  Are there duplicate entries?

Without a doubt, my ancestor listed the most times in the Federal Census was Eliza (Knapp) Menke, who lived to be 102 years old.  I’ve found her in every Federal census from 1850 to 1940.

I get 9 not counting the non-existent 1890 census.  Eliza stayed on her farm until about 1942 and died in the Anna Rohe Nursing home in Lincoln, Nebraska in 1944.

Posted by Laura Mattingly at 10:00 AM No comments:


In 1873, the village of Wood River Center became known as Shelton, Nebraska.  It sits 18 miles east of Kearney along the Union Pacific railroad line.  The population was just over 1000 in 2010.  Shelton is mostly in Buffalo county, but sits just inside the Hall county line.  If your search for Shelton ancestors doesn't bring results in Buffalo county, you should try Hall county.  A few years of the Shelton Clipper are available on microfilm at the Grand Island Library. 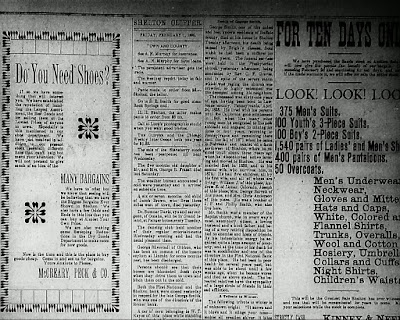 Column 1
Do You Need Shoes?
If so we have some-
thing that will interest
you.  We have established
the reputation of hand-
ling the Largest Assort-
ment, the Best Goods and
for selling them at the
Lowest Prices of anyone
in town. Especially is
this manifested in our
shoe department.  We
have just received in ad-
dition to our present
stock several different
lines that can't help but
merit your attention.  We
will not pretend to give
much of an idea of the
MANY BARGAINS
We have to offer but
we know that seeing will
be believing that we have
the Biggest Bargains Ever
Shown in Shelton.  We
also have a few Odds and
Ends in this line that you
can buy at Almost Your
Own Price.
We are also making
some Sweeping Reduc-
tions in the Dry Goods
Department to make room
for new goods.
Now is the time and this is the place to buy goods cheap.  Come in and see us for bargains.
Your Anxious to Please,
McCREARY, PECK & CO.

See A. N. Murphy for insurance
See A. N. Murphy for farm loans.
The persistent advertiser gets the trade.
The weather report today is fair and warmer.
Pants made to order from $6. - Skelton, the tailor.
Go to S. E. Smith for good clean Rock Springs coal.
H. H. Skelton, the tailor, makes pants to order from $6 up.
Call at Lucy's photographic studio when you want good photos.
THE CLIPPER and the Chicago Weekly Inter-Ocean both one year for $1.85.
The sale of the Stansberry stock has been postponed till next Wednesday.
The five months old daughter of Mr. and Mrs. George B. Frasell died last Saturday.
The weather bureau announced a cold wave yesterday and it arrived on schedule time.
A six or seven months old child of Jacob Brown, who lives three miles west of town, died yesterday.
Dr. Sumner Davis, eye and ear surgeon of Omaha, will be in Grand Island, at Palmer house, every Tuesday.
The dancing club held another of their regular entertainments Wednesday evening and had the usual pleasant time.
George Silvernail of Gibbon, who has been an inmate of the insane asylum at Lincoln for some months past, has been discharged.
Persons should see that their horses are blanketed these days when they drive them to town and hitch them out in the cold.
Both the First National and the Shelton bank were closed yesterday in respect for the late George Smith, who was one of the directors of the former bank.
A car of corn belonging to W. T. Keyes of the place while standing...

Column 3
Death of George Smith.
George Smith, one of the oldest and best known residents of Buffalo county, died at this home in Shelton Tuesday afternoon, his death being caused by Bright's disease, from which he had been a sufferer for several years.  The funeral services were held in the Presbyterian church yesterday afternoon, being conducted by Rev. C. F. Graves, and in spite of the severe storm which was raging the church was crowded, so highly esteemed was the deceased among his neighbors.
The deceased was sixty-one years of age, having been born in Lawrence county, Pennsylvania, April 24, 1833.  He lived with his parents until the California gold excitement in 1840, when like many other young men he emigrated to the new eldorado and engaged in mining for three or four years, returning to Pennsylvania and remaining there until the fall of 1871 when he came to Nebraska and located on a farm northwest of Shelton, where he resided until about three years ago when he discontinued active farming and moved to Shelton.  He was married first in 1850, and to his second wife, who survives him, in 1872.  He had five children, all by his first wife, and all of whom are living - William J. of this place, Andrew E. of Lamar, Colorado, Joseph of this place, Mrs. George Barrett of this place, and Mrs. Chris Anderson of this place.  He was a brother of J. P. and Philip Smith, who also live here.
Mr. Smith was a member of the Baptist church, was in every way a most exemplary citizen, a loving husband and a kind father, and being of a very retiring disposition he had no enemies and hosts of friends.  By his indomitable energy he acquired quite a large amount of property, and at the time of his death he was a stockholder and one of the directors in the First National Bank of this place.  He had been in poor health for several years past, but was able to be about until a few weeks ago, when he became worse and died as above stated.
The bereaved relatives have the sympathy of a large circle of friends in their sad affliction.

Posted by Laura Mattingly at 9:00 AM No comments: 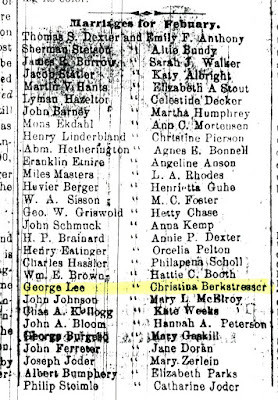 Posted by Laura Mattingly at 4:00 AM 2 comments: