When I wrote the post Henrietta Smith, Daughter of, -- of course -- John and Mary Smith I had every reason to believe the parents of John Potter Smith were Aza Smith and Mehitable POTTER. That was the name given as John's mother on his death certificate.

But, I have never been able to find a marriage record for Aza Smith and Mehitable POTTER. I have, however, found one for Azor C Smith and Mehitable WATROUS or WATERS. From the database US Newspaper Extractions, the marriage took place on Feb. 15, 1821 in Lebanon, Connecticut. From the Barbour Collection, Lebanon Volume, the date is March 15, 1821. John was born in 1825. What if the informant for that death certificate only assumed POTTER was her maiden name based on John's middle name?  Should I go down this path?

Now I don't believe all of Ancestry's hints, but there was one for Azor C Smith that led me to a death record for an Azor C Smith, who died in Worcester, Massachusetts at age 56 in 1854. His parents were POTTER & Harriet Smith. John Potter Smith had moved to Worcester by 1850. Could I be on the right road?

Potter Smith died in 1824 in Norwich. His Will is available on Ancestry. Mentioned in the widow's portion of the inventory is "A C Smith". The relationship is not explained from what I've been able to read of the documents. Is it just a coincidence?

I have stalled out, unable to find anything on Mehitable Watrous or Waters. Women are always much more difficult. I'm looking at a William Waters in Lisbon, but have not found anything yet that connects him to Azor or Mehitable Smith.  I'm not sure where to turn, but after a break I will travel down this path again.

Posted by Laura Mattingly at 2:00 PM No comments:


Here are more of the clippings I copied from microfilm of the Canton Weekly Register. This is my third post with these, two other posts are from 1852 and 1853. I want something to come of the time I spent searching for my ancestors, so I hope these will be of help to someone. 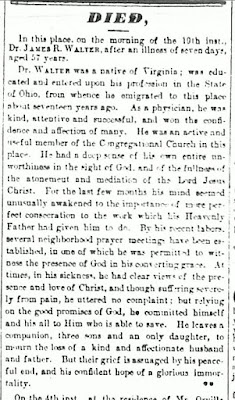 January 26, 1854
In this place, on the morning of the 10th inst., Dr. JAMES R. WALTER, after an illness of seven days, aged 57 years.
Dr. WALTER was a native of Virginia; was educated and entered upon his profession in the State of Ohio, from whence he emigrated to this place about seventeen years ago. As a physician, he was kind, attentive and successful, and won the confidence and affection of many. He was an active and useful member of the Congregational Church in this place. He had a deep sense of his own entire unworthiness in the sight of God, and of the fullness of the atonement and mediation of the Lord Jesus Christ. For the last few months his mind seemed unusually awakened to the importance of mere perfect consecration to the work which his Heavenly Father had given him to do. By his recent labors, several neighborhood prayer meetings have been established, in one of which he was permitted to witness the presence of God in his converting grace. At times, in his sickness, he had clear views of the presence and love of Christ, and though suffering severly from pain, he uttered no complaint; but relying on the good promises of God, he committed himself and his all to Him who is able to save. He leaves a companion, three sons and an only daughter, to mourn the loss of a kind and affectionate husband and father. But their grief is assuaged by his peaceful end, and his confident hope of a glorious immortality. 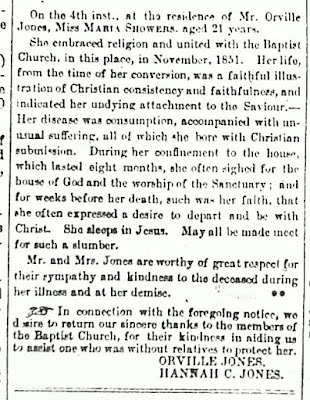 (January 26, 1854 again)
On the 4th inst., at the residence of Mr. Orville Jones, MISS MARIA SHOWERS, aged 21 years.
She embraced religion and united with the Baptist Church, in this place, in November, 1851. Her life, from the time of her conversion, was a faithful illustration of Christian consistency and faithfulness, and indicated her undying attachment to the Savior.
Her disease was consumption, accompanied with unusual suffering, all of which she bore with Christian submission. During her confinement to the house, which lasted eight months, she often siged for the house of God and the worship of the Sanctuary; and for weeks before her death, such was her faith, that she often expressed a desire to depart and be with Christ. She sleeps in Jesus. May all be made meet for such a slumber.
Mr. and Mrs. Jones are worthy of great respect for their sympathy and kindness to the deceased during her illness and at her demise.
In connection with the foregoing notice, we desire to return our sincere thanks to the members of the Baptist Church, for their kindness in aiding us to assist one who was without relatives to protect her.
ORVILLE JONES
HANNAH C. JONES 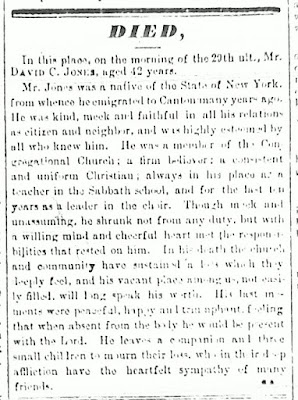 February 16, 1854
DIED,
In this place, on the morning of the 29th ult., Mr. DAVID C. JONES, aged 42 years.
Mr. Jones was a native of the State of New York, from whence he emigrated to Canton many years ago. He was kinds, meek and faithful in all his relations as citizen and neighbor, and was highly esteemed by all who knew him. He was a member of the Congregational Church; a firm believer; a consistent and uniform Christian; always in his place as a teacher in the Sabbath school, and for the last ten years as a leader in the choir. Though meek and unassuming, he shrunk not from any duty, but with a willing mind and cheerful heart met the responsibilities that rested on him. In his death the church and community have sustained a loss which they deeply feel, and his vacant place among us, not easily filled, will long speak his worth. His last ?ments were peaceful, happy and triumphant, feeling that when absent from the body he would be present with the Lord. He leaves a companion and three small children to mourn their loss, who in their deep affliction have the heartfelt sympathy of many friends. 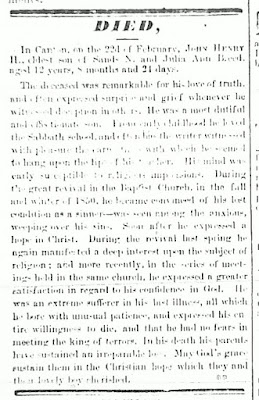 March 9, 1854
DIED,
In Canton, on the 22d of February, JOHN HENRY II., eldest son of Sands N. and Julia Ann Breed, aged 12 years, 8 months and 21 days.
The deceased was remarkable for his love of truth and often expressed surprise and grief whenever he witnessed deception in others. He was a most dutiful and affectionate son. From early childhood he loved the Sabbath school, and oftentime the writer witnessed with pleasure the ??? with which he seemed to hang upon the lips of his father. His mind was early susceptible to religious impressions. During the great revival in the Baptist Church, in the fall and winter of 1850, he became convinced of his lost condition as a sinner - was seen among the anxious, weeping over his sins. Soon after he expressed a hope in Christ. During the revival last spring he again manifested a deep interest upon the subject of religion; and more recently, in the series of meeting held in the same church, he expressed a greater satisfaction in regard to his confidence in God. He was an extreme sufferer in his last illness, all which he bore with unusual patience, and expressed his entire willingness to die, and that he had no fears in meeting the king of terrors. In his death his parents have sustained an irreparable loss. May God's grace sustain them in the Christian hope which they and their lovely boy cherished. 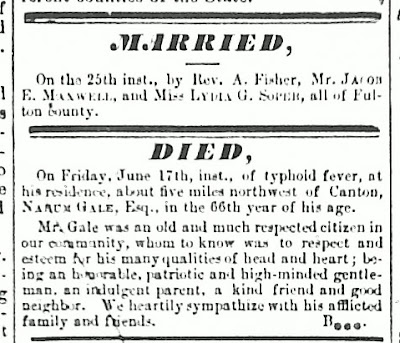 June 22, 1854
MARRIED,
On the 25th inst., by Rev. A. Fisher, Mr. JACOB E. MAXWELL, and Miss LYDIA G. LOPER, all of Fulton county.
DIED,
On Friday, June 17th inst., of typhoid fever, at his residence, about five miles northwest of Canton, NARUM GALE, Esq., in the 66th year of his age.
Mr. Gale was an old and much respected citizen in our community, whom to know was to respect and esteem for his many qualities of head and heart; being an honorable, patriotic and high-minded gentleman, an indulgent parent, a kind friend and good neighbor. We heartily sympathize with his afflicted family and friends.