In order to determine the couple in my family tree who was married the longest, I need to know two things:  1) when they were married and 2) when at least one of them died.  So just looking at my direct ancestors who meet that criteria, the couple married the longest is my paternal Great Grandparents, Clarence & Cora Mann.  Married in Fairbury, Nebraska on July 5, 1899, they were married for 69 years until his death in October, 1968.  I'm not sure, but it seems like I remember hearing that their anniversary was mentioned by Paul Harvey on his radio show.  The Lincoln Journal Star even published an article about their anniversary in July of 1968. In 1949, they got their picture in the paper for their 50th anniversary.  Such media moguls!

Less attention was probably given to my Seventh Great Grandparents Ebenezer Bliss & Joanna Lamb.  They were married in Springfield, Massachusetts on July 23, 1723 and until his death in November of 1761 - over 38 years.  They are also the Fourth Great Grandparents of Cora Mann.

On July 2, 1648, Thomas Sawyer married Mary Prescott in what is now Lancaster, Massachusetts.  Thomas died in 1706, so they were married for 58 years.  They are my Eighth Great Grandparents.  Their marriage is recorded in various books of transcribed Vital Records from Massachusetts towns.

Gabriel Mattingly & Ann Juliette Molohon were married on July 24, 1810 in Washington County, Kentucky.  This awesome, original but hard to read document is online at familysearch.  They are my husband's Second Great Grandparents.

The stats for July are 49 marriages, the 11th is the most popular date with four marriages on that day.  Probably not all of them got the media attention that Clarence & Cora Mann did.


Here's one short column from the local news of the Peotone, Illinois Vedette.  Walter Jorgenson is my second Great Grandmother Lena Jorgenson's brother.  She was married to William Roscoe and living in Saline County, Nebraska by this time.  I would have loved to have found a mention of her paying a visit.  This is from microfilm, not a searchable, digital source.


Miss Ethel Parish, of Harvey, visited Miss Lois Imholz the first of the week.
Walter Jorgenson, of Chicago, accompanied his mother to Peotone Wednesday evening.
Mr. and Mrs. Chas. Pla??e of Harvey, visited their daughter, Mrs. L. E. Stassen, Tuesday.
Mrs. Oscar Fleischer visited with her parents, Mr. and Mrs. M. Kerger, in Kankakee, this week.
Mrs. Mamie Anderson, of Chicago, visited her mother, Mrs. A. Vinson, Tuesday and Wednesday.
Henry Houghton, who for several weeks was confined to his home with rheumatism is able to be out.
Mr. and Mrs. Thomas Collins entertained Mrs. A. N. Winkless, of Chicago, a day or so the first of the week.
Fred Wahls, who was called to Chicago by the illness of his son, Henry J., called on Peotone friends Monday.
Mr. and Mrs. W. Smit, of Kankakee, were the guests of Mrs. Smit's parents, Mr. and Mrs. John Meyer, Sunday.
Mr. and Mrs. Wm. Werner, of Beecher, were the guests of Mrs. Werner's sister, Mrs. L. E. Stassen, yesterday.
Hon. David Slush, of Detroit, the capitalist, who is backing the new electric road, was in town a few hours last evening.
W. H. Morrison was in Chicago on business a few days last week.  He and his family spent Sunday with friends at Oreana.
Hon. Fred Wilke was in town yesterday shaking hands with Peotone friends.  He was a welcome caller at The Vedette office.
Mrs. O. Jorgenson, who has been ill for many weeks at the home of her daughter, Mrs. Judson, of Chicago, returned to Peotone Wednesday evening.
John Kurtz, of Correctionville, Iowa, called on Peotone relatives and friends Tuesday.  He ran down from Chicago after marketing a lot of stock.
Chas. Dornbusch and family spent the past week in Peotone.  Today they leave for Wisconsin where business takes Mr. Dornbusch for the next two or three weeks.
John Hagenow entertained his sons, John and Christian, Rev. Geo. Schnessler and other relatives Monday.  They came to Peotone to attend the Singleman funeral.


Posted by Laura Mattingly at 5:45 AM No comments:

Friday's Faces from the Past - Harvard Kid #3 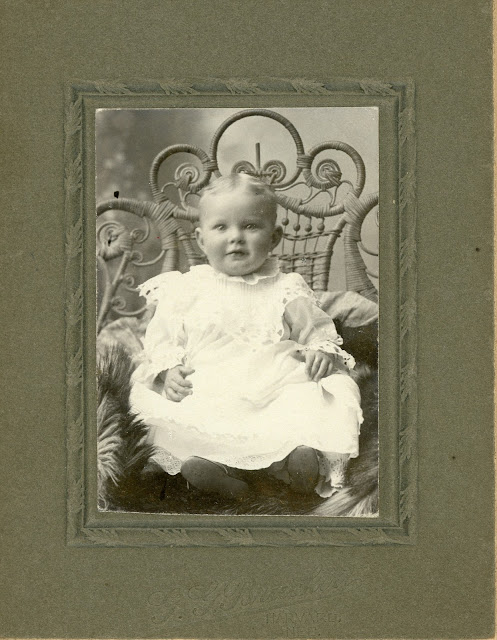 This is a photo by G. G. Bruckert from Harvard, Nebraska with no identifying information.  His or her face is slightly blurry.  Written on the bottom of the left shoe is "09 / eu / 40". 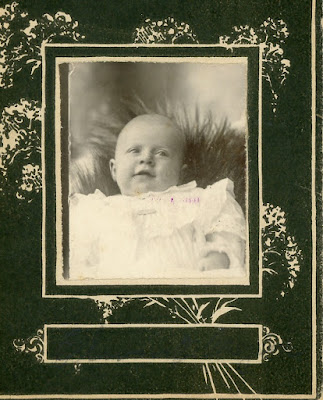 When I was looking for a picture of another child taken in this or a similar chair, I noticed something else.  Two things looked familiar with this photo from a post I wrote about Elvie and Elwin Megrue.  First, that furry stuff that the child above seems to be sitting on and this one is laying on.  Second, the gown both infants are wearing look alike, although it's hard to see very well.  I'm sure that those infant gowns were all pretty similar.  I just wondered if this gown was worn by siblings and is actually the same gown.  Elwin Megrue had an older sister named Vernie Faye.  Is the above photo possibly Vernie Faye taken when she was of age for the same gown?  Maybe their mother made them each a gown with the same trim.  What do you think?
These photos and others are in my possession and I would be glad to send them to family who wants them.  Check out all of my Friday's Faces from the Past posts by clicking the link below or under "Labels".

Posted by Laura Mattingly at 3:00 AM 6 comments: