"Shot Through the Knee"


My Great Grandpa Arthur McGrath was involved in a little excitement in his younger days (he was almost 20 years old). This happened May 23rd, only three weeks before his mother passed away on June 14th in 1896.

On last Saturday evening Leonard Whaley while on his way to Harry Burnett's farm 6 miles east of town where he was employed, accidentally shot himself through the knee joint of the left leg.
He and Arthur McGrath had come to town in the evening after supper, and Burnett had told Leonard to shoot a dog which had been breaking up setting hens, and while going home, thinking that would be a good time to kill the dog, he drew a .38 self-cocking revolver from his pocket and shot at the dog.  The noise of the gun frightened the team and they started up so suddenly as to cause the spring seat to tip over backwards and Leonard, with the revolver in his hand and his body in the reclining position caused by the upturned seat, grabbed for a tighter hold on the lines, the grasp causing the revolver to be discharged the ball entering the inside of his leg above the knee and passing through the thigh bone and knee joint lodging in the top of the shin bone.
McGrath, returned to town and summoned Dr. Fochtman, upon whose advice Burnett brought Whaley to the Commercial hotel.  Dr. Rosenberg, of Lexington, was sent for and arrived Sunday afternoon; Dr. Smith, of Gothenburg, was also wired and the ball removed, also some small pieces of fractured bone.
It was decided not to amputate the leg.  The accident is a very serious one and under the most favorable circumstances will at least result in a stiff knee joint.
Leonard is resting very well and the prospects are that he will recover as speedily as could be expected.


In my last post I mentioned that I searched the Canton (Illinois) Weekly Registers on microfilm and found nothing for my own research. I didn't have time to grab everything with genealogical reference, but I randomly saved a few mentions of deaths and/or marriages. Someone might as well get some good out of the time I spent on this. So I've transcribed what I could of these clippings. You can see they were sometimes very difficult to read. Long obituaries were a rare occurrence. Most "columns" of deaths or marriages were the shorter type, like below.

Hymenial
MARRIED - On Thursday the 15th inst. by Rev. JOHN LUCCOCK, Mr. JESSE COLLINS to Mrs. JANE R. WALTERS, all of this county.

Obituary
Communicated,
DIED - In Farmington, Fulton County, Ills., on Wednesday evening, January 14th, EDWARD S. BERSON, aged 26 years.The deceased was a native of Frederick County Virginia, but emigrated to Ohio in 1831 and in May 1850 removed to Illinois.
It is a melancholy office for one who has known him long, and loved him well, to recount the virtues and worth of one who has passed away from us forever; but the promptings of a friendship tried and true, and of a sorrow most heartfelt, suggests something more than the bare announcement of his death. Beloved by all who knew him, he was especially endeared to those who, in the social circle, had the most frequent opportunities of knowing his noble heart, and appreciating his generous character. In all the relations of life, as a husband, a father, and a friend - he ever carries those same amiable qualities, which, while they gave a brilliancy and a charm to his company, seemed(?) to fix, most firmly in the recollection of all, an appreciation of his own inherent goodness. Seldom are we called to mourn the departure of one whose loss is so keenly and deeply felt by all. 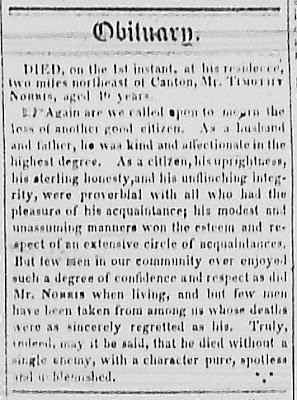 DIED, on the 1st instant, at his residence, two miles northeast of Canton, Mr. TIMOTHY NORRIS, aged 19 years.
Again are we called upon to mourn the loss of another good citizen. As a husband and father, he was kind and affectionate in the highest degree. As a citizen, his uprightness, his sterling honesty, and his unflinching integrity, were proverbial with all who had the pleasure of his acquaintance; his modest and unassuming manners won the esteem and respect of an extensive circle of acquaintances. But few men in our community ever enjoyed such a degree of confidence and respect as sis Mr. NORRIS when living, and but few men have been taken from among us whose deaths were as sincerely regretted as his. Truly, indeed, may it be said, that he died without a single enemy, with a character pure, spotless and unblemished.

Mrs. Bass was born in Bergen county, New Jersey; spent the early part of her life in the city of New York, and the last fifteen years in this place. With her husband and daughter she had spent the past season, with much satisfaction, visiting their friends at the East. Returning, and when near home, on board a steamer on the Illinois river, she was taken ill, and in a few hours expired. Her remains were put in a metallic coffin and brought to this place for interment. These peculiar circumstances of her death have greatly deepened the grief in the hearts of her stricken husband, family and friends. Her sun went not down at noon; her journey was not short; her life was not in vain. She professed faith in Jesus Christ while residing in New York, and adorned that profession by the exhibition of some of the most lovely graces. Active, faithful and affectionate as a wife and a mother, with a cheerful countenance and prudent hand, she moved in her sphere with gentleness and power. Kind to all, meek and ever ready to overlook the frailties of others, she endeared herself to a large circle of acquaintances, who deeply sympathize with the bereaved family. As her life was peaceful, so was her death. And though called so unexpectedly, she left her counsel and prayer of kindness and peace, and with raised hands whispered, "Happy, happy," as her spirit sunk to rest. This brightness of hope dispels the gloom from her grave, and like the oil of joy, soothes the sorrows of her mourning friends. 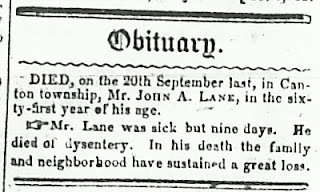 October 2, 1852
Obituary
DIED, on the 20th September last, in Canton township, Mr. JOHN A. LANE, in the sixty-first year of his age.  Mr. Lane was sick but nine days. He died of dysentery. In his death the family and neighborhood have sustained a great loss. 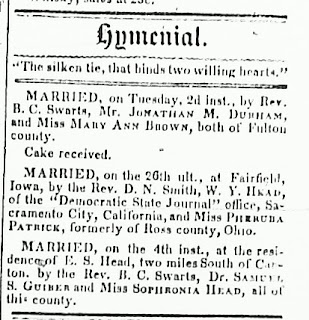 MARRIED, on the 4th inst., at the residence of E. S. Head, two miles South of Canton, by the Rev. B. C. Swarts, Dr. SAMUEL S. GUTHER and Miss SOPHRONIA HEAD, all of this county. 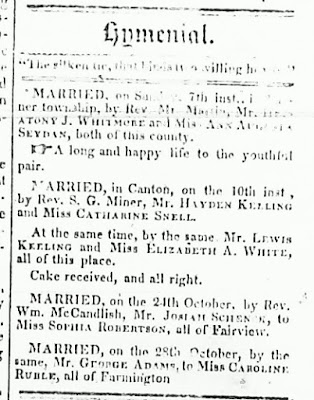 MARRIED, in Canton, on the 10th inst., by Rev. S. G. Miner, Mr. HAYDEN KEELING and Miss CATHERINE SNELL.
At the same time, by the same Mr. LEWIS KEELING and Miss ELIZABETH A. WHITE, all of this place.
Cake received, and all right.

MARRIED, on the 24th October, by Rev. Wm McCandlish, Mr. JOSIAH SCHENCK, to Miss SOPHIA ROBERTSON, all of Fairview.

MARRIED, on the 28th October, by the same, Mr. GEORGE ADAMS, to Miss CAROLINE RUBLE, all of Farmington.


Posted by Laura Mattingly at 4:30 PM No comments:

For anyone who may be interested, the Canton (Illinois) Weekly Register in the mid 1800’s was not a “newsy” newspaper as far as genealogy is concerned. There isn’t much social news. I did an inter-library loan from the Abraham Lincoln Library in Springfield and for $5.00 I received 3 rolls of microfilm, all of the Canton Weekly Register from 1850 through about 1872.  I did my best to look at all of it, but so much of the ink was so faded the pages could hardly be read at all.

I was hoping to find a mention of the marriage of John McGrath and Rachel Jane Simmons, telling where they went to get hitched.  I was also hoping to find mentions of the deaths of Ruth Webb, her daughter Mary Rosilla Davee, and possibly Rosilla Mills or Lebius Simmons.  ANY mention of any of those people or their families would have been great to find.  What did I get? 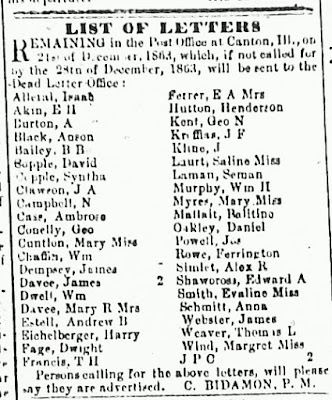 Persons calling for the above letters, will please say they are advertised.  C. BIDAMON, P. M.

It was nearly Christmas - were they all Christmas cards? Sure wish I knew who the mail was from.  I need to find a death date for Mary R Davee, and this would have helped if it was from a paper after November of 1864, when I know that Mary had a son. But this does tell me that they still lived in Canton in 1863. James, her husband who also has a letter to pick up, remarried in July of 1865 in Jasper county. So I wasn't sure where they had lived, this tells me that they were in Canton not Jasper county, at least in 1863. Mary Rosilla Davee possibly died and is buried there in Canton.

After spending as much time at the library as I could in the three weeks the films were there, this list of letters doesn't do much for me. Maybe it will be of more use to someone else.

Posted by Laura Mattingly at 4:15 PM No comments: