Several of my ancestors died in Fulton County, Illinois in the 1850's, '60's and '70's. Any record of their deaths has been very hard to come by. Earlier this year, I got the Canton Weekly Register on microfilm through inter-library loan to search for their names in death or other notices in the newspaper. Luck was not with me for anything on my family, but I snatched some random clippings with genealogy info to share so that my time spent might help someone else. Here are some from 1853.

Dr. DAVISON was born in Rensselaer county, New Yor in 1793. Before removing to this State he resided a number of years in Allegheny county, New York, where he filled several important offices. He afterwards resided in Ashland county, Ohio. He removed to Tazewell county, in this State, in 1833, and to Canton in 1840. He has been connected with this paper as one of the proprietors and senior editor for about two years.

The deceased enjoyed a well earned reputation as a skillful physician and a faithful and able editor. We mourn the departure of a valuable citizen, a kind and affectionate husband and father. He whose skill has relieved the sufferings and prolonged the lives of many others, has himself fallen, in full strength, before the inexorable destroyer, which neither human skill nor anxious friends could arrest.

By the sudden death of one so healthy and well known by us all, we are made to feel that we stand in the gate way of eternity, and that the Supreme Being who hold the keys, will soon pass us from this stage of life to the world of spirits.

Died, on Wednesday, Feb. 23d, GEORGE THOMAS, only son of Joshua and Maria Wheeler, aged on year and twenty days. 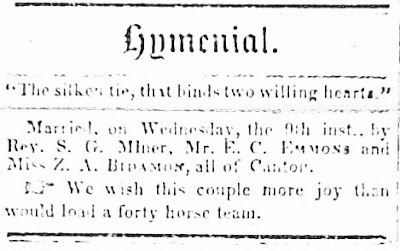 We wish this couple more joy than would lead a forty horse team. 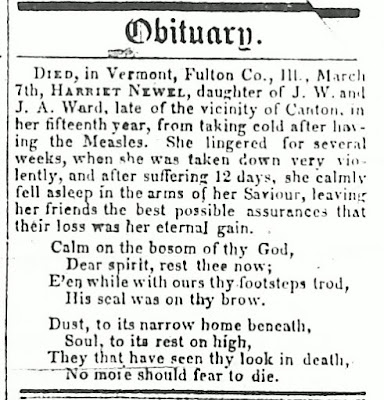 DIED, in Vermont, Fulton Co., Ill., March 7th HARRIET NEWEL, daughter of J. W. and J. A. Ward, late of the vicinity of Canton, in her fifteenth year, from taking cold after having the Measles. She lingered for several weeks, when she was taken down very violently, and after suffering 12 days, she calmly fell asleep in the arms of her Saviour, leaving her friends the best possible assurances that their loss was her eternal gain.

Calm on the bosom of thy God,
Dear spirit, rest thee now;
E'en while with ours thy footsteps trod,
His seal was on thy brow.
Dust, to its narrow home beneath,
Soul, to its rest on high,
They that have seen thy look in death,
No more should fear to die.

Posted by Laura Mattingly at 6:15 PM No comments: 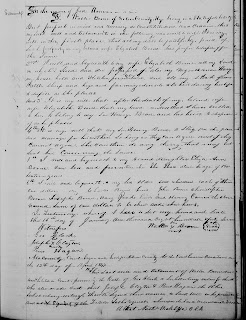 "In the name of God Amen,I, Walter Boone of Nelson County, Ky, being in a State of debility, But perfect in mind and memory do constitute and ordain this my last will and testament in the following manner to wit: 1st my will in the first place, that all my debts be faithfully paid of such property as my beloved wife Elizabeth Boone sees proper to dispose of for the same.

2nd I will and bequeath to my wife Elizabeth Boone all my land on which I lived and do? proposed of, also my negro man Harry, my house hold and kitchen furniture, and all my stock of horses, cattle, sheep and hogs, and farming utensils to be hers during her life to dispose as she pleases.

And 3: It is my will that after the death of my beloved wife wife Elizabeth Boone, that my land and all that I have Willed to her, to belong to my son Henry Boone and his heirs to dispose of as he pleases.

4th It is my will that my son Henry Boone to stay on the place and manage for his mother, So long as they can agree, and if they cannot agree, She can then do any thing that may but suit her Conserning the same.

5th I will and bequeath to my ten older children each of them one dollar, viz Charles Boone's heirs, John Boone, Christopher Boone, Joseph Boone, Mary Peake's heirs and Henry Carcers? the above named sum of one dollar to be their and their heirs.

In testimony whereof, I have to set my hand and seale this 16th day of January, one thousand eight hundred & forty seven.  Walter ^his mark^ Boone  {seal}


At a County Court begun and held for Nelson County At the Courthouse in Bardstown on the 12th day of April 1847This last will and testament of Walter Boone dec'd was Executed in Court proven by the Oath of Geo. Clark, a Subscribing witness thereto who also made oath that Joseph Clayton & Pius Hagan the other subscribing witnesses thereto Signed their names, to said will in his presence of and <----> Testator at his request, whereupon the said will is ordered to record.Attest Nath'l Wickliffe Olh"


Walter Boone was born in Prince George's County, Maryland before 1760. He and his wife, Mildred Edelin, were the parents of more than ten children, according to his Will. The only children named are: Charles, John, Christopher, Mary, Joseph and Henry. There may be an Inventory of his Estate to be found at Family Search, but I'm not finding the time to look for that. It will have to wait.

My Husband's Relationship to: