The Rooms Are All on Fire 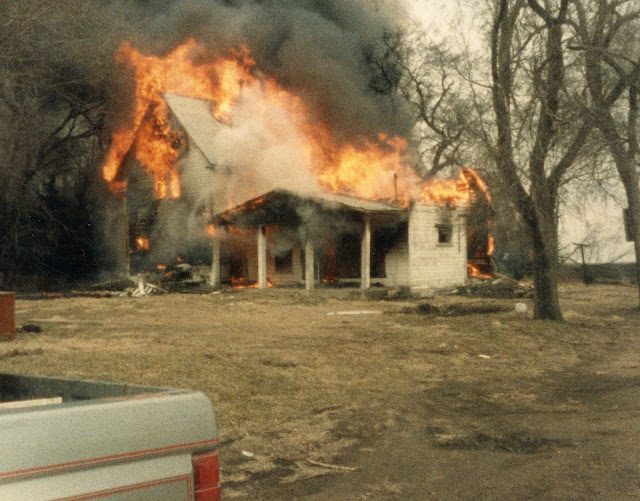 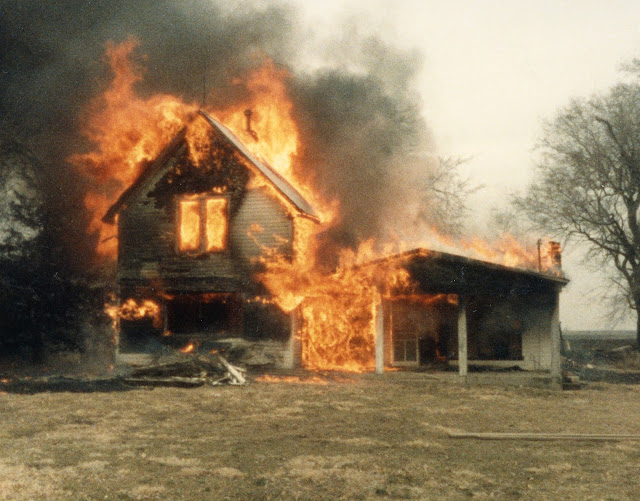 As my Grandma took these pictures of her old house burning down, I wonder what memories came to her. It makes me sad to see these pictures, there were a lot of good times had here.
No one was living in the house in 1987, it was burned down for more farm ground by the farmer who bought all but a few acres of their property a few years earlier. My Grandparents built a new house and shed on the acreage they kept at the corner of two rural roads now called 711th Road and 582 Avenue on the Jefferson/Gage county line in southeast Nebraska. They moved from Aurora into this farmhouse in about 1965 when the youngest of their four children was finishing high school and then into their new home in 1981 about the time they each retired. Grandpa worked at Petersen Wrench in DeWitt and farmed. Grandma worked at the Beatrice State Home.

It was a two-hour drive for my family to my Grandparents' place. We probably made the trip three or four times a year, usually just for the day. Always at Christmas when my other cousins, Aunts and Uncles were also there. Our Christmas gatherings were often on a Sunday near Christmas Day, Grandma would work at the State Home on the holidays. One year at Christmas we went down the night before and there weren't enough beds for everyone. My Aunt Sondra and Uncle Dale and I spent the night at Grandma's sister and her husband Aunt Florence and Uncle Pearle's house a few miles away. I think I also remember once sleeping on the couch in the dining room with the back that folded down into a bed. During the years they lived in this house my siblings and I spent part of a week there without our parents at least once when we were young. My sister and I got the bigger of the two upstairs bedrooms, my two brothers the other one. My parents met them halfway in Friend, Nebraska either to drop us off or pick us up. It's strange that I don't remember anything we did while we were there.
Other buildings on the old place were also torn or burned down. My brothers and cousins played in and around those buildings, but I don't remember playing out there. I was the only girl for several years, I kept out of trouble unlike the boys. They have some stories to tell!  At the end of Grandpa and Grandma's short driveway on either side were "Husker footballs", white with red stripes on poles stuck in the ground (made from some kind of metal maybe, I don't know).  They moved those over to their new home.
The house faced south to the road. The small square window on the right in the first photo is the kitchen window. The back door where we always entered is to the right of that. Grandma's kitchen was long and narrow, not much wider than the opened oven door. The sink was at the south end of the room with a window looking out over the front yard. Right inside the door was their kitchen table with a chair for each of them at each end. The stove and refrigerator were on the west wall. If I remember right, she didn't have a dishwasher.
Through the arched doorway to the dining room, the table was to the right where we had our big family dinners of roast, ham or turkey, mashed potatoes and all other sorts of dishes. I had to be careful if there was scalloped corn, Grandma sometimes made it with oysters and I am not a fan. I'm sure when we were all there, some people ate at the kitchen table and some at TV trays in the living room. After dinner there were often games of 10 Point Pitch played. As a kid, you would start out sitting on an adult's lap to watch the game, sometimes getting to "play" a card. About the time you were big enough to hold your cards, you could fill in a hand or two while someone had to get up from the game for a little bit. It was a rite of passage when you could play a "real" game with the more patient adults. Often some of Grandma's family would visit while we were there and then the Pitch games got serious.
In the second photo I can see the screen door burning on the front porch. There was a door to the front porch in the dining room, and also one around the corner in the living room. They might have been open in the summer, but I don't remember using those doors much. There was a big picture window in the living room which was decorated in the greens, golds and browns of the '70's. I remember the TV sat in the southwest corner of the room. Grandpa smoked a pipe and I remember his pipe stand and ash tray next to his recliner.
At the bottom of the stairs there was a bookshelf that held various things including a set of encyclopedias. This story comes up often, and everyone has a slightly different memory of it. But my memory is that I was looking through an encyclopedia and found a twenty-dollar bill. (The amount of money found grows depending on who's telling the story.) I ran to show Grandma what I found and she made it clear this was not a "finders-keepers" situation. Several others took an interest in the encyclopedia's that day. I don't remember anyone else finding more money, others might remember they did. When the encyclopedia's were on their moving sale years later, I think we all wanted one last look through them.
Grandma and Grandpa slept in the downstairs bedroom which was open to the living room. It wasn't a place for us kids to be other than to get to the bathroom from the living room. Between their bedroom and the bathroom was their walk-through closet. That's where Grandpa's safe was. One of my cousins wrote the combination to the safe on a slip of paper and stuck it in the door frame of the closet in the south upstairs bedroom. I wonder if it burned in the fire.
The bathroom had a door on each end of the room. They didn’t latch well and would sometimes come open again when you closed the other door. Makes a little girl kinda nervous (maybe some big girls too). The laundry room was of course, not a place for kids, but we always had to peek in and look for some A & W bottles. If there was any chance of getting root beer floats, there was Root Beer in the laundry room.

Out of the twelve of us grandkids, probably all but the last four of us can remember this house. No doubt, Grandma had a few of these memories I've shared and many others too, as she watched them all go up in flames.