Mary Jones Harwood is a half-sister to my Great Great Grandmother Nancy Jane (Clemie) Mann.  Just two years apart in age, they had different fathers, but the same mother, Mary Jane Hull.  They grew up in Iowa, both got married, moved around with their families and about 1882 both made their homes in Nebraska.  Nancy Jane lived near Plymouth, in Gage County and Mary near Riverton, in Franklin County, a distance of just over 100 miles.

After learning her death date from a distant cousin, I found her obituary in the Franklin paper.  It was split over two columns, so along with it here's a little news from Franklin County, Nebraska. 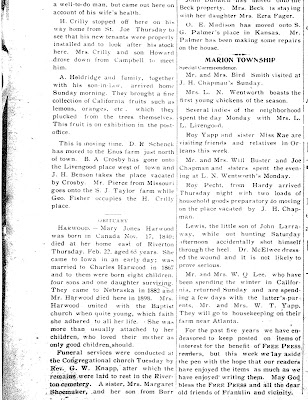 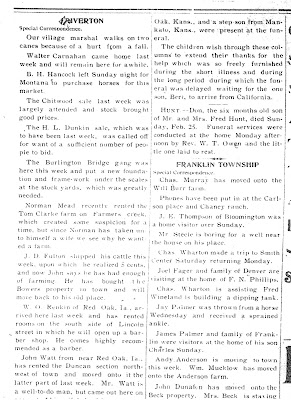 Our village marshal walks on two canes because of a hurt from a fall.
Walter Carnahan came home last week and will remain here for a while.
B. H. Hancock left Sunday night for Montana to purchase horses for this market.
The Chitwood sale last week was largely attended and stock brought good prices.
The H. L. Dunkin sale, which was to have been last week, was called off for want of a sufficient number of people to bid.
The Burlington Bridge gang was here this week and put a new foundation and frame-work under the scales at the stock yards, which was greatly needed.
Norman Mead recently rented the Tom Clarke farm on Farmers creek, which created some suspicion for a time, but since Norman has taken on to himself a wife we see why he wanted a farm.
J. D. Fulton shipped his cattle this week, upon which he realized 5 cents, and now John says he has had enough of farming.  He has bought the Bowers property in town and will move back to his old place.
W. O. Renkin of Red Oak, Ia., arrived here last week and has rented rooms on the south side of Lincoln street in which he will open up a barber shop.  He comes highly recommended as a barber.
John Watt from near Red Oak, Ia., has rented the Duncan section north-west of town and moved onto it the latter part of last week.  Mr. Watt is a well-to-do man, but came out here on....

account of his wife's health.
H. Crilly stopped off here on his way home from St. Joe Thursday to see that his new tenants were properly installed and to look after his stock here.  Mrs. Crilly and son Howard drove down from Campbell to meet him.
A. Holdridge and family, together with his son-in-law, arrived home Sunday morning.  They brought a fine collection of California fruits such as lemons, oranges, etc., which they plucked from the trees
themselves.  This fruit is on exhibition in the post office.
This is moving time, D. R. Schenck has moved to the Enos farm just north of town.  B. A. Crosby has gone onto the Livengood place west of town and J. H. Benson takes the place vacated by Crosby.  Mr. Pierce from Missouri goes onto the S. J. Taylor farm while Geo. Fisher occupies the H. Crilly place.

OBITUARY
HARWOOD - Mary Jones Harwood was born in Canada Nov. 17, 1840; died at her home east of Riverton Thursday, Feb. 22, aged 65 years.  She came to Iowa in an early day; was married to Charles Harwood in 1867 and to them were born eight children, four sons and one daughter surviving.
They came to Nebraska in 1882 and Mr. Harwood died here in 1898.  Mrs. Harwood united with the Baptist church when quite young, which faith she adhered to all her life.  She was more than usually attached to her children, who loved their mother as only good children should.
Funeral services were conducted at the Congregational church Tuesday by Rev. G. W. Knapp, after which the remains were laid to rest in the Riverton cemetery.  A sister, Mrs. Margaret Shoemaker, and her son from Burr...

Oak, Kans., and a step son from Mankato, Kans., were present at the funeral.
The children wish through these columns to extend their thanks for the help which was so freely furnished during the short illness and during the long period during which the funeral was delayed waiting for the one son, Bert, to arrive from California.

Special Correspondence
Chas. Murray has moved onto the Will Burr farm.
Phones have been put in at the Carlson place and Chaney ranch.
J. E. Thompson of Bloomington was a home visitor over Sunday.
Mr. Steele is boring for a well near the house on his place.
Chas. Wharton made a trip to Smith Center Saturday returning Monday.
Joel Fager and family of Denver are visiting at the home of F. N. Phillips.
Chas. Wharton is assisting Fred Wineland is building a dipping tank.
Jay Palmer was thrown from a horse Wednesday and received a sprained ankle.
James Palmer and family of Franklin were visitors at the home of his son Charles Sunday.
Andy Anderson is moving to town this week.  Wm. Mucklow has moved onto the Anderson farm.
John Dunafen has moved onto the Beck property. Mrs. Beck is staying...

with her daughter Mrs. Ezra Fager.
O. E. Madison has moved onto S. G. Palmer's place in Kansas.  Mr. Palmer has been making some repairs on the house.

Special Correspondence
Mr. and Mrs. Bird Smith visited at J. H. Chapman's Sunday.
Mrs. L. N. Wentworth boasts the first young chickens of the season.
Several ladies of the neighborhood spent the day Monday with Mrs. L. L. Livengood.
Roy Yapp and sister Miss Rae are visiting friends and relatives in Orleans this week.
Mr. and Mrs. Will Buster and Joe Chapman and sisters spent the evening at L. N. Wentworth's Monday.
Roy Pecht, from Hardy arrived Thursday night with two loads of household goods preparatory to moving on the place vacated by J. H. Chapman.
Lewis, the little son of John Larraway, while out hunting Saturday afternoon accidentally shot himself through the heel.  Dr. McElwee dressed the wound and it is not likely to prove serious.
Mr. and Mrs. W. Q. Lee, who have been spending the winter in California, returned Sunday and are spending a few days with the latter's parents, Mr. and Mrs. W. T. Yapp.  They will go to housekeeping on their farm near Atlanta.
For the past five years we have endeavored to keep posted on items of interest for the benefit of FREE PRESS readers, but this week  we lay aside the pen with the hope that our readers have enjoyed the items as much as we have enjoyed writing them.  May God bless the FREE PRESS and all the dear old friends of Franklin and vicinity.

Posted by Laura Mattingly at 7:00 PM No comments:

Arthur Levi McGrath was born 139 years ago on October 17, 1876. He was the youngest child of John and Rachel (Simmons) McGrath.  He had two older sisters who married while he was a young boy.  They all lived near Henry, Illinois until about 1886 when he moved with his parents and sister Minnie Patterson from Illinois, to Cozad in Dawson County, Nebraska.

His mother died in 1896 and his father remarried a year and a half later. Sometime before 1900, Art moved to Clay County, Nebraska near his other sister, Becky Smith.  He worked as a farm laborer for Horace Iliff in 1900.  In 1910 he was living in York County working as a foreman for the railroad.  In 1920 he was a laborer in a poultry house and living in Aurora.  His brother-in-law, Cal Negley, was also in the poultry business after having worked on the railroad.  This advertisement was one of several I saw in the Aurora News-Register, this one from 1919. 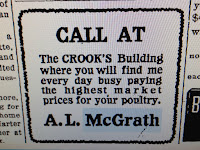 The 1930 census has his occupation listed as a "Drayman on a Dray line", meaning he drove a delivery truck.  In 1931 he was a truck driver for the Oberg Transfer Company.  In the 1940 census, he was 63 years old with no occupation given.

This business card was in the old trunk in the attic.  I have not yet found out when the McGrath's Service Station was in operation.

Art married Sadie Ellen Negley on October 8, 1908, 9 days before his 32nd birthday.  They were married by a County Judge in York, Nebraska.  Four children were born to them, Virgil, Alice, Orville and Violet.  At age 88 on June 19, 1965 he died in the Aurora hospital.  Survivors included his four children, eight grandchildren and four great-grandchildren including me.

Posted by Laura Mattingly at 6:15 AM No comments:

Friday's Faces from the Past - 5 Girls from Eldorado?


These 5 old photographs are from the Old Trunk in the Attic.  First names only are written on the backs.  Chances are good that these young ladies were friends of my Great Grandmother Sadie Negley McGrath and her sister Alice Negley who went to school in Eldorado, Nebraska right around the turn of the century.  Click on each photo to enlarge for a better look. 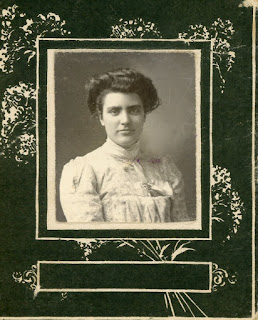 This is Alice, but not Alice Negley.  Alice Yost was 19 in 1900, living in Eldorado Precinct, Clay County, Nebraska.  This could be her.  Another slight possibility is Alice Grosshans, who in 1900 was 9, living in Sutton.  This girl definitely looks older than 9, but Sutton is not far away and there is another family connection to the Grosshans family.  Not knowing for sure what year this photo was taken, there's a slight chance it could be either girl. 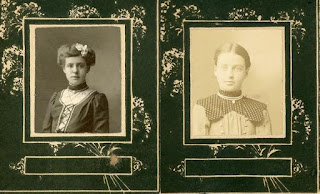 Ethel is written on the back of both of these, but I don't think that these two photos are of the same person.  Ethel Pitt was 11 and Ethel Smith was 13 in 1900.  Ethel Smith was later a niece of Sadie Negley after her marriage to Art McGrath.  There are three Ethel's who lived in Harvard, Miss Clark, Miss Wadsworth and Miss Calame who were teenagers and might have known the Negley's. 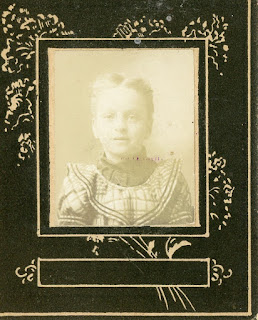 Myrtle here looks younger than the other girls.  There was a Myrtle Brenneman who was 6 years old in 1900.   Or Myrtle Peterson and Myrtle Kitzinger were both 8.  One more Myrtle, Miss McKinsey, was 16.  All of them lived in Eldorado Precinct. 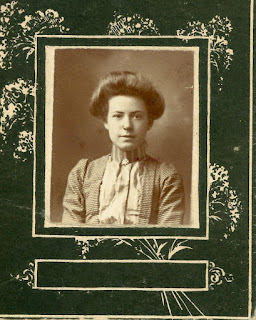 This is Saddie - spelled that way on the back.  Not my Great Grandmother Sadie, I'm sure.  Sadie being a nickname for Sarah, there was a Sarah Ochsner who was 15 in 1900, it could be her.  Other candidates are Sarah Kilmer, age 8 and Sarah Schwartz, 14.  There were a couple other Sarah's who were older and married so not likely them.

There are other photos in my stash that have this same style frame, some with names and ages written on the back.  From those names I can determine who those people were and about when their photograph was taken.  So I think these photos were probably all taken by the same photographer sometime between 1900 and 1910.  That's why I used the 1900 census to come up with these possibilities.  The fact is, I don't really know who these 5 girls are.

Posted by Laura Mattingly at 4:30 AM No comments: