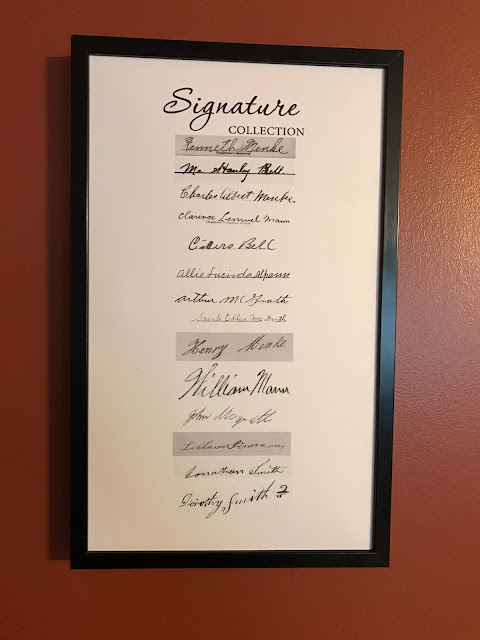 Signatures are so unique and personal and I always love to find my ancestors' signatures. I was renovating my house and wanted to add some family history displays to the wall above my desk. If you've seen this before, I had tweeted it a while back.

The signatures came from documents that I felt my direct ancestors personally signed, like Draft registrations, Wills and legal documents. I cropped them out then resized each signature to 3" in width. Then I lined them up in the center of a legal size document and printed on white cardstock. I had more signatures than I could use, but I had a limit.  I wanted the vertical to end up 13" to match up beside my family tree chart (and could only print on 14" cardstock anyway). Some of the signatures needed some cleaning up, like removing some background marks. My experience with Microsoft Paint was very minimal before this, but I took my time.

The frame was sold in pieces, I bought one set (2) of 13" and one set of 8". When I get tired of seeing this collection of signatures, I can replace signatures with others and have an entirely new collection to see!

Delilah Simmons was born to Lebbeus & Sarah Simmons in Fulton County, Illinois in 1861. Delilah is the half-sister of my Third Great Grandfather, Lebius Simmons, son of Lebbeus & Esther Simmons.

Delilah appears in the 1870 census with Elias & Melissa Graves and son Henry age 3. She is listed as Delilah Graves. This Petition of Letters for Guardianship was filed on February 26, 1878, when Delilah was 17. According to the Illinois Statewide Marriage Index database online, Delilah and Wilson were married the next day, February 27, 1878. 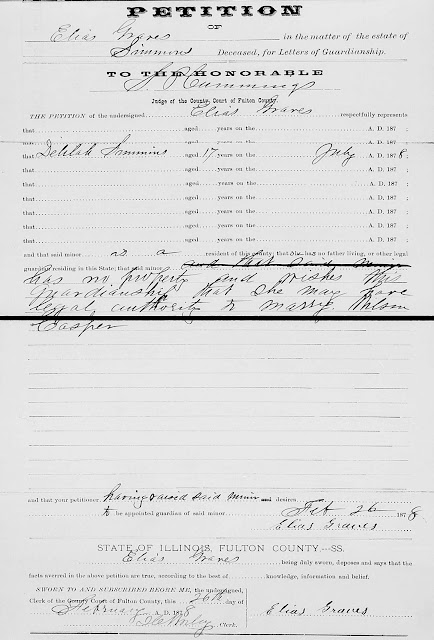 PETITION
of
<Elias Graves> in the matter of the estate of <Simmons> Deceased, for Letters of Guardianship.

TO THE HONORABLE
<S P Cummings>
Judge of the County Court of Fulton County.
THE PETITION of the undersigned < Elias Graves> respectfully represents that...
<Delilah Simmons> aged <17> years on the <July> A.D. 187<8>

STATE OF ILLINOIS, FULTON COUNTY,---SS
<Elias Graves> being duly sworn, deposes and says that the facts averred in the above petition are true, according to the best of _____ knowledge, information and belief.

SWORN TO AND SUBSCRIBED BEFORE ME, the undersigned, Clerk of the County Court of Fulton County, this <26th> day of <February> A.D. 187<8>
<JCWorley> Clerk.
<Elias Graves>

Friday's Faces From the Past - Townsend in Hastings 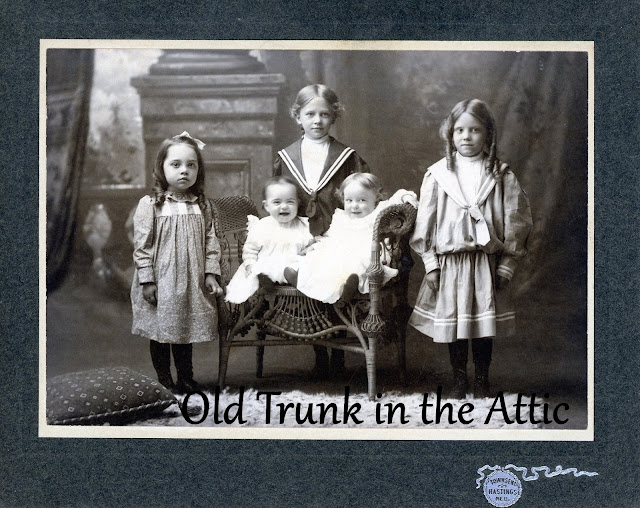 This is a great photo of five girls - or maybe one or both of the youngest two are boys. The clothing and photo mount seems to date this in the 1890's if I'm learning much about these vintage photos. The photographer's imprint is "Townsend, Hastings, NEB", and the picture measures just about 5" x 7".

Hastings is only 20 miles from Eldorado, Nebraska. This is another photo that someone in the Negley family kept, likely of someone they knew. Unfortunately, they didn't write their names on it. These kids could be from Hastings, Harvard, Stockham or anywhere in the vicinity of Eldorado. I'm interested in finding out how this family knew mine and will be glad to give this to a descendant of these kids.

See more old unidentified photos I have on the "Faces of Eldorado, Nebraska" on the menu bar above.

Posted by Laura Mattingly at 5:30 AM No comments:

Email ThisBlogThis!Share to TwitterShare to FacebookShare to Pinterest
Labels: #52Ancestors, Friday's Faces from the Past, Nebraska


"The Charmed Life is a life of loving companionship with the One altogether lovely. We, the wearers of the Ring, have said, "I am His." We can live in true companionship with any one only as we love; but as our love for one grows, the wish to be near him grows; and the more we love, the closer we are drawn."

That is the Introduction printed in the first pamphlet titled "The Charmed Life", by David C Cook, Chicago, Illinois. 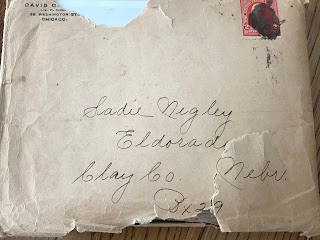 Among a box of things in the Old Trunk in the Attic was an envelope addressed "Sadie Negley, Eldorado, Clay County, Nebr, Box 29" with a 2 cent stamp. The torn envelope is about 4-1/2" x 6", and the papers tucked into it all fit perfectly. As far as I can tell, everything that I have in this little envelope is what was originally sent to Sadie. Except for one thing. 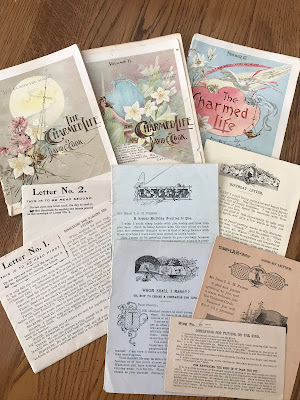 Included in the packet is two numbered letters, three little booklets titled "The Charmed Life" full of daily devotions, and four smaller pamphlets. Mr Cook's instructions are to read only one letter per day.


It's all printed in a very small font and hard on my eyes to read. From what I've learned from the contents, Sadie spent 25 cents to get this packet of literature. On the back of Volume I is Sadie's Membership No. "190441". (It's crazy to me how close that number is to including the exact same numbers in a different order as my DAR Membership number).

In 1902, Sadie was a 22 year old single woman. She had been a member of the Eldorado Methodist Episcopal church likely most of her life. She may have been a Sunday School teacher and used this literature for her lessons. The daily devotions are aimed at older children or young adults and provide encouragement to deal with life's ups and downs with a strong Christian faith. It also attempts to entice the reader to purchase more literature and other items as well as strong suggestions to invite others to "join the Circle".


David C Cook established his company in 1875 providing Sunday School cirriculum for children's ministries. The company is still in operation today out of Colorado Springs, Colorado, and their publications are distributed world-wide.

I don't know if this is a collectors item, but other than the envelope and a torn page or two it's all in pretty good shape. It almost looks as if Sadie hardly read it. Her ring was most likely lost a long time ago.