My series of posts is usually focused on my Great Great Grandparent generation, but along with the Mann family series here, I'm going to discuss the incredible siblings of my Grandma.  She and two sisters are alive (over 90) and in the interest of respect for their privacy and internet security, I won't mention their names. 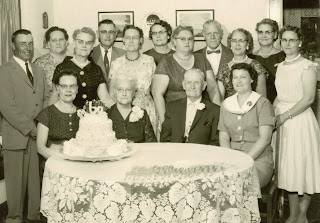 Clarence & Cora Mann had 14 children, the 13th child died at 4 months, one set of twins. They were married July 5, 1899.  The natural thing for them to do for their anniversary, being so close to Independence Day, was to celebrate it with a family picnic.  As their children grew, so did the picnic. In July of 1999, the 100th Annual Mann Family Picnic was held with well over 100 people in attendance.  The turnout is not that large every year, but the picnics continue.  Next July will be #115.

When Clarence & Cora were alive, another annual family gathering was at Christmas.  It was held at their little two bedroom house in Beatrice (the house that photo was taken in).  I was very young and have only a vague memory of these.  I remember SO many people I didn't know, and the two beds being piled high with winter coats.  Also, the basement where the men would all congregate around card tables, probably playing 10 point pitch.  The Lincoln Sunday Journal & Star ran an article in 1968 about Clarence & Cora's 69th wedding anniversary that mentioned the past Christmas there had been 117 people at the house. They had 39 grandchildren and 39 great grandchildren at that time.

Of the 13 siblings, two died before reaching 80, 4 lived into their 80's and 7 lived (3 living) to be at least 90 years old.  Seven couples celebrated their 50th anniversary (one brother died only a couple of months before his), six of them their 60th. The first cousins generation spans from 1920 to 1962.

Through the years, those of the 13 siblings and their spouses living did a lot of things together.  They took a lot of group photos.  If their families pooled them together, I bet they could come up with a group shot of them every year for like 30 years.  I would love to have that collection!

Posted by Laura Mattingly at 7:45 PM No comments: 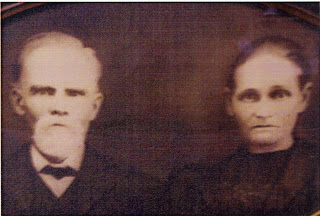 This is William Mann, but I'm not sure which of his two wives this is.  He was first married to Nancy Clemie on September 14, 1861.  She died in 1894 and on March 6, 1896 he married Mary Armstrong.  This may be their "wedding" photo.  Where he married either woman is still an ancient Chinese secret to me.

William was born somewhere in England on February 12, 1830.  The huge old trunk in the cyber attic lists him as an early settler in Princeville Township in Peoria County, Illinois, arriving in 1854.  He is also given credit for being a founding member of the White's Grove Baptist Church and having dug the well for the White's Grove School in 1880.  He immigrated in 1852 and if I have learned correctly, in the 1900 census under the "Naturalized" column there is a "Pa", which meant that he had filed his first papers for declaration of intent to become a US Citizen.

Searches for "William Mann" come up with an astounding number of hits that would take hours to look through.  Because I don't have hours to look, I haven't been very successful finding this particular Mann, which is disappointing.  It makes me act a lot like little Susan Walker in "Miracle on 34th Street", even though there were packages under the tree for me, disappointed that I didn't see the package that I wanted.  I need to remember her mantra - "I believe.  I believe.  It's silly, but I believe."  Positive thinking will help me get through those hundreds of hits and find where in England this William Mann is from.

Nancy had been married before she married William.  Her first husband was John O'Brien and they had a daughter named Nancy Jane who was barely a year old when her father died.  A descendant of Nancy Jane's told me that she didn't know about her real father until just before she was married.

Thomas Clemie from Scotland, and Mary Jane Hull from Ireland were Nancy's parents. She was born in Upper Canada, which was a British Colony in 1838.  Thomas died when Nancy was about 2, so both she and her daughter lost their fathers at a very young age.  Mary Jane remarried to Edward Jones and had 4 girls - Mary, Jane, Margaret and Jenette. Nancy originally was a nickname for Mary.  I don't know at what point in history it became a name on its own.  Why do I get the idea that Mary Jane Hull's mother's name may have been Mary - or Jane - or both?  The Jones family, with Clemie children Andrew, Robert and Nancy, lived in Van Buren County, Iowa in 1850.  Mary Jane died there May 29, 1854, she was only 37 years old.

William and Nancy had 11 children together:
Nancy died at age 55 on February 11, 1894, that was the day before William's birthday. Her obituary mistakenly says she was survived by one son, not the four it should have said. William was 75 when he died on August 29, 1905. 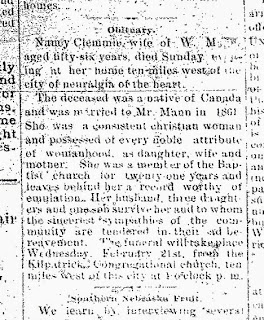 A Mann family trait that looks like it comes from William with his white beard in that photo, is snow white colored hair.  It's pretty really, but no one wants theirs to turn white at too young an age.

My original goal when I started doing this research, was to find out what country each line of my family immigrated from.  In this line I have succeeded.  These people were from England, Canada, Ireland and Scotland.  International research is something I've been putting off until I have the time to focus on it - like when I retire.  More and more records are becoming available online, I should go ahead and give it a try.  I believe.  I believe. 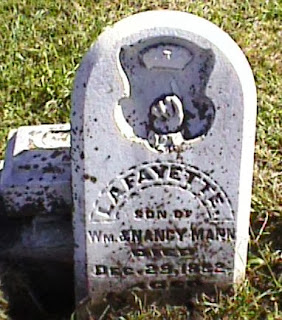 Lafayette Mann was 15 when he died December 29, 1881.  He is buried beside his parents in the Kilpatrick Cemetery near Plymouth, Nebraska.  Four other children of William and Nancy Mann died while the family lived in Princeville, Illinois.
They would be buried somewhere in Peoria County, Illinois, but I don't know if they have any markers on their graves.  Most likely the cemetery would be the Princeville Township Cemetery, but cemetery listings I have found so far don't list these children.

I have had the tragic experience of losing an infant niece and nephew.  It seemed so unfair to have it happen twice in our family.  William and Nancy Mann dealt with the loss of 5 children.

Posted by Laura Mattingly at 7:00 PM No comments:

Several of my direct ancestors' siblings never married or some did but didn't have children.  They have no direct descendants.  I want to give them their 15 minutes here once in a while on Sibling Saturdays.

William B. Mann was the brother of my Great Grandfather Clarence Mann. 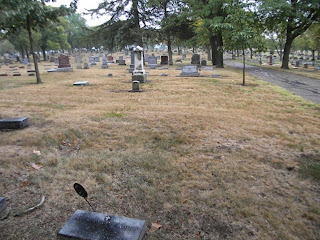 EDIT 10/30/14 - I'm glad to say I'm wrong about their not having any markers in the cemetery.  Photos of them have been posted on their findagrave memorials.  I must have been in the wrong section or grass has grown over them, but they are there. 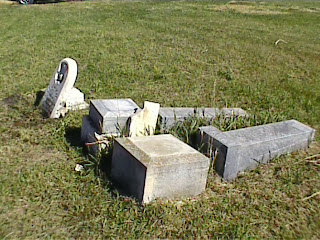 These need to be fixed.  They are the gravestones of my Great Great Grandparents William and Nancy Mann and their son Lafayette.  At least they fell name-side-up.  I wonder what might be on the other side.  They are all in the Kilpatrick Cemetery, also known as the Friendship Cemetery, just south of Plymouth, Nebraska.  I took this photo in 2005.  The first step is to get an estimate.

UPDATE: June 4, 2018 - I'm late in updating this, but these grave stones have been uprighted!  I told my Dad, who told his cousins, some of whom happen to have a concrete construction business and in early 2017 they were fixed. Now the graves are being taken care of by family. 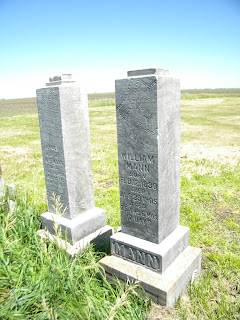 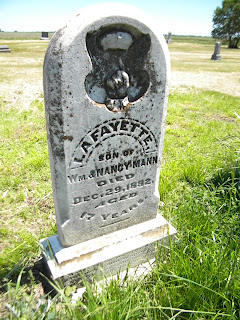 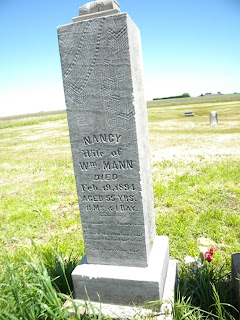 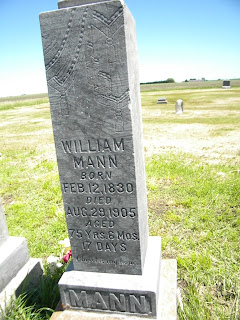