Born Mary Jane Hull, my Third Great Grandmother's first married name was Climie, and she died with her second married name of Mary Jane Jones. Her life ended in 1854 in a little town in the southeast corner of Iowa called Bonaparte.

In 2014 as we traveled across Iowa on Highway 2 while on vacation, I was able to visit her grave in Bonaparte Cemetery. This is the second oldest grave (with an original stone) of my direct ancestors that I've been able to visit in person. It's a big cemetery right next to the Honey Creek coming off the Des Moines River on the west side of Bonaparte. It's natural grass had been mowed recently when I was there. Everything was green and with the trees lining the creek it was a pretty place. There was no on-site directory, but after some walking around I was able to find the stone based on the photo posted on Find A Grave.

Mary Jane and her first husband Thomas may have divorced, but I haven't found a record to confirm that. Some people claim his grave is in the Wyoming Cemetery in Ontario, Canada.

Mary Jane had a total of eight children with her two husbands. With Thomas, who is my Third Great Grandfather, she had Andrew, Robert and my Second Great Grandmother, Nancy Jane. With Edward Jones, Mary Jane had five children, Mary, Jane, Margaret, Jeanette and George. She died shortly after George's birth. George lived to be about 80 years old. The remains of her children are resting in Iowa, Nebraska, Kansas and Missouri.

Still legible in person, her tombstone is inscribed:
"Erected by Edward Jones in memory of his wife Jane Jones who departed this life May 29, 1854 Aged 37 yrs 10 Mos". 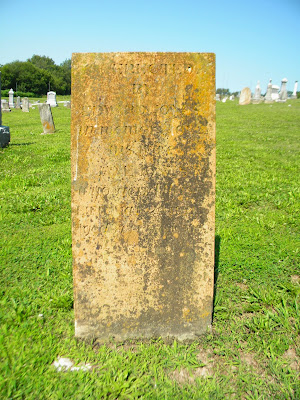 Her parents are unknown to me. Mary Jane was born in Ireland, I believe, and moved first to Canada, but I am not sure if her parents ever came to this continent.


When I first found William and Nancy Mann's grave, it was disappointing to find their tombstones lying on the ground. But it was fortunate that they were lying with the inscriptions facing up. This was in 2003, and word spread through the family and a couple of years ago the stones were set back upright. Even their son Lafayette's stone on the left was reset.

Kilpatrick Cemetery is just a small country cemetery, pretty much abandonded. There is a pile of broken tombstones in one corner. After my family reset the Mann stones, I've heard it has been taken care of a little better. It's on the corner of 722 and 581 roads in rural Jefferson county. I've been back a few times and always forget exactly where it is. It's about 20 miles north of the Prairie Home cemetery where their son and my Great Grandpa Clarence Mann lies.


Christ is my hope

Four young children of William and Nancy died in Illinois before they moved away, then Lafayette died at age 17 not long after moving to Nebraska. There were 12 children in all. The other seven children's final resting places are in Iowa, California, Kansas and Nebraska.

As far as I know, William's parents remained in England and would be buried there. I have no idea yet who they are, but someone has named them on the Family Search tree. They have not responded to my request for more information about that.

Nancy's mother's grave is in Bonaparte, Iowa. I was able to visit that a few years ago.


It was in 2006 when I visited the grave of my Third Great Grandparents, James & Anna Gaisford in Minonk, Illinois. Please don't yell at me for the use of chalk, I washed it off and I don't do it anymore. At the time, I had learned this technique from a cemetery historian and didn't know it could damage the stone. Even with the chalk, these stones were very difficult to read then, and that was 13 years ago.  I'd love to see what they look like now, but I'm over 500 miles away.

Minonk Township Cemetery is a large one. Before our trip, I found someone through the El Paso, Illinois website who had details for the locations of these graves. Through emails they gave me very helpful directions and it saved us a lot of time searching for them on a hot July day. It's not easy to get my family to allow me a little time in a cemetery while on vacation. My daughter transcribed the graves for me to help us get out of there faster. 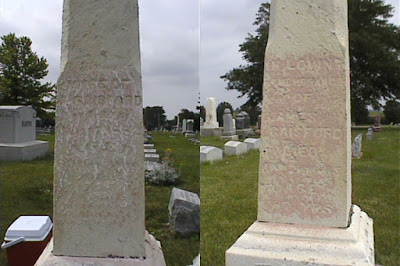 In the 1850's, James and Anna left their home and the families they grew up with in England. Six of their eight children were born there, their two youngest boys, Samuel and John "Gehu", were born in Rhode Island. About 1868, the family moved to Minonk where James and Anna lived the rest of their lives. At the time of Anna's death, two of their children had moved to Nebraska, Emma and my Second Great Grandfather Charles. When James died, daughter Hannah Pickard was also living in Nebraska and sons Sam and John were possibly living in Arkansas and Iowa.

James Jr passed away only four years after his father. He along with siblings William and Anna Pickard and their families are also resting in the Minonk Township Cemetery. Charles, Samuel, Hannah Pickard and Emma Bailey are buried in Gage County, Nebraska, and Gehu, who lived to be 92, lies in Council Bluffs, Iowa. The father James remarried after Anna's death to Fannie Brooks, who is also buried in the Minonk Township Cemetery.

I may never pass that way again, and I certainly hope that I didn't cause any damage to their monument. But I'm glad that I was able to visit the grave of James and Anna Gaisford.


Three generations of my Grandma's maternal line rest in the Prairie Home Cemetery north of Diller, Nebraska including her parents, Clarence and Cora Mann, and her Grandparents Charles and Henrietta Gaisford. Eight of the 11 children born to Charles and Henrietta are also buried there - Mary Ann Gaisford, Anna Fielder, Emma Carpenter, Carrie Gaisford, Cora Mann, Nellie Gaisford, William Gaisford and Gladys Amos. Son Charles is buried in Oklahoma, and daughter Gertrude Weaver lies in the Evergreen Home Cemetery in Beatrice 20 miles away. An infant daughter Ella was buried in the Old Beatrice Cemetery, the first death in the family after moving to Nebraska. Carrie and Nellie also passed on before the parents. The remains of over 30 direct descendants of Charles and Henrietta are interred in the Prairie Home Cemetery.

There is one large family stone with GAISFORD engraved on it, and then there are small stones to the side of that for each of them simply inscribed "FATHER, Charles, 1842-1920" AND "MOTHER, Henrietta, 1848-1932". 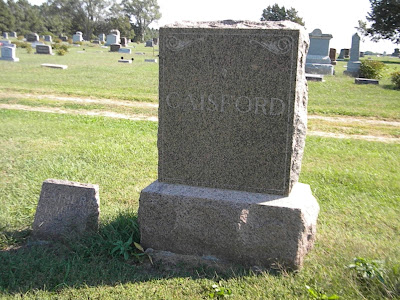 Henrietta moved away from "home" in Worcester, Massachusetts about 1869 and likely never went back. She outlived her three sisters and one brother, the brother dying just months after his birth which took the life of their mother when Henrietta was 18. Her lineage can be traced back to early colonial days in America, even doubly related to Henry Burt who was here by 1667. Hope Cemetery in Worcester, Massachusetts is the place of burial for Henrietta's parents, but the graves are not marked.

Charles came from England about 1856 at about 14 years of age. He died January 20, 1920. The census taker came around on February 5th and as per the instructions, Charles was listed as living there on January 1, 1920. Nine of their children were living at his death, all but one in the vicinity. Three of his brothers survived him: William of Minonk, Illinois, Gehu of Council Bluffs, Iowa and Samuel, also of Diller. Sam, and one sister Hannah Pickard, are also buried in the Prairie Home Cemetery along with other members of their families. Charles' parents rest in the Minonk Township Cemetery, Minonk, Illinois.

At the time of Charles' death, his daughter Cora Mann was pregnant with twins, though she didn't know that at the time. My Grandma was one of those twins.