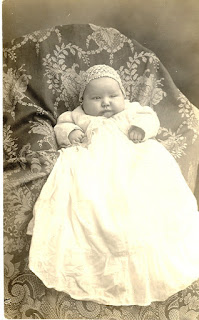 His birth day was April 20, 1914, this photo is marked "Orville, 7 weeks". Orville Callahan was the third child of Art & Sadie McGrath. He joined his older brother and sister, Virgil and Alice at home in Eldorado, Nebraska. Little sister Violet, my Grandma, came along three years later. Orville lived in Eldorado just a few years, by 1910 the family moved to Aurora where he attended school, his name appearing on the honor roll multiple times. In high school he received a Remington certificate for his typing skills.
He displayed some acting skills as well. In the Junior Class play "Take My Advice" at Aurora High School, Orville was "very good" as Kerry Van Kind according to the review in the Aurora newspaper. The Senior class play was "The Ghost Parade", Orville played a character named simply "Jones".  He graduated from Aurora High School with the Class of 1932.
In June, 1933 he enrolled in the Civilian Conservation Corps at Fort Crook in Omaha. He served in Chadron for one year and worked as a grocery clerk, a plumber and was also tasked with exterminating prairie dogs. For his service he received $30 per month plus room and board, the requirement was that he send $22-25 of that home to his parents. He got to go home for Christmas. 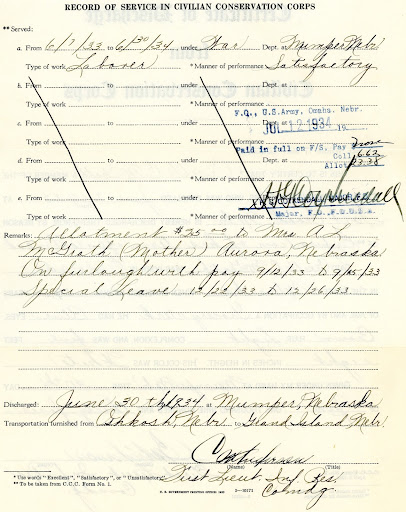 After his CCC service, he joined his brother Virg working in the Produce & Feed Store in Aurora. At age 26, he decided to further his education and in 1940 moved to Washington, DC to attend the Benjamin Franklin University, a school of "accountancy". Maybe it was an ad like this that caught his attention.A year later he started his career with the US Government, which was interrupted by his service in World War II. He was involved in the action at Omaha Beach on June 6, 1944. My attempt to have his service file retrieved was unsuccessful, it may have been one that burned in a fire at the National Archives.
While in DC, he met Ethel Jaeschke, who had been married to Revedy McPherson whom she divorced. She was employed in the US Treasury Department. She wouldn't like it if I mentioned that she was older than Orville. I remember Aunt Ethel, I liked her, she sent me birthday cards. So I won't say how much older she was (but she was 3 in 1910.)
On Friday, the 23rd of August, 1946 Orville and Ethel tied the knot in Baltimore, Maryland. The ceremony location is not given, they possibly went before a Judge. No one from Uncle Orville's side of the family made the trip as far as I know. I'm not sure when they heard about this event - before or after the fact. It wasn't mentioned in his hometown paper. 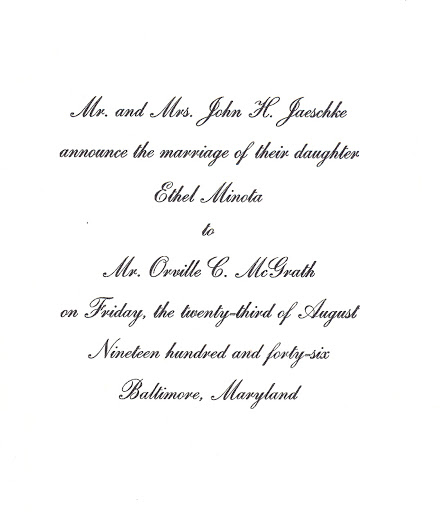 In 1951, Uncle Orville and Aunt Ethel moved to Denver, Colorado where he went to work as an auditor in the US General Accounting Office. For several years they lived at 1120 Jasmine Street, Denver. They didn't have any children.
Orville was an active member of several fraternal organizations in the Denver area including the Dawn Chapter #125 Order of the Eastern Star, Rocky Mountain Consistory Scottish Rite Foundation, Colorado Commandery 1 of Knights Templar, Denver RAM Chapter 2 and past master and charter senior warder of Revelation Masonic Lodge 180. He was also a member of the Augustana Lutheran Church.
On the evening of October 9, 1969 at just 55 years of age Uncle Orville died at his home at 755 S Alton Way, Denver, Colorado. Funeral services were held at Moore Mortuary in Colorado and then again at Higby Mortuary in Aurora, Nebraska. Masonic rites were conducted by the local Mason Lodge 68 AF & AM. His grave in the Aurora Cemetery is near his parents, who both preceded him in death, He was the first of his siblings to pass away. I have no specific memory of Uncle Orville, but I'm sure I saw him a few times. In every picture I have of him, he has a big smile just like in the one above.
Posted by Laura Mattingly at 7:00 PM