Friday's Faces from the Past - Gertrude Fifield's Boy 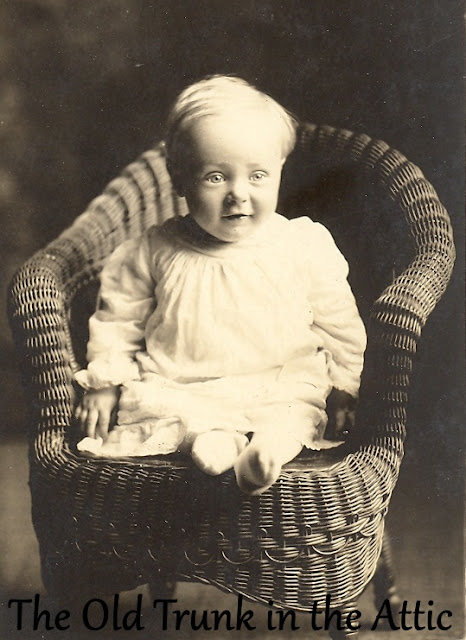 "Leroy Benjamin Hopkins, Age 10 mo." is written on the back of this photograph which really helped me learn why this photo was included in the collection of old photos once belonging to my Negley ancestors of Eldorado, Clay County, Nebraska. It was easy to trace Leroy through census records and I found the connection with his mother, Gertrude Fifield.

Gertrude was born in 1896 in Nebraska and lived in Eldorado at least through 1910. She was about 16 years younger than my Great Grandmother Sadie (Negley) McGrath, but I've learned that Sadie and/or her sister Alice were Sunday School teachers at the Eldorado Methodist Church. Gertrude could easily have been one of their students. If not through church, Eldorado was a small enough village that everyone knew everyone, so it's no doubt the Fifield's were acquainted with the Negley's.

Gertrude married Benjamin Hopkins and they moved to Logan County, Nebraska. Together they had four children, Leroy, Verlon, Eugene and Edna. In an earlier edition of my Friday's Faces, I posted a photo of an infant marked with the name "Edna" with no surname, maybe she is Edna Hopkins.

Leroy was born in Stapleton on July 24, 1918 according to his WWII Draft registration, so this photo was taken about 1919/1920. He married Helen Elmira Foster in 1940. Leroy & Helen were the parents of eight sons: Frank, Robert, Larry, James, Ronald, Richard, William and Gregory. Leroy died in 2015 in Seaside, Oregon and was brought back to Nebraska for burial in the Aurora Cemetery.

It was nice of Gertrude to keep in touch with her friends the Negley's after she moved away. I'd like to return the favor. I would be happy to get Leroy's photo back into the hands of his family. If you are a relative of Leroy Hopkins and would like to have the original of this photo, please leave a comment or send me an email.

Posted by Laura Mattingly at 2:00 AM

Email ThisBlogThis!Share to TwitterShare to FacebookShare to Pinterest
Labels: Friday's Faces from the Past