COVID-19 put a stop on any plans for Easter dinner. Family reunions in the summer were all cancelled. No Thanksgiving dinner. Christmas is not likely, and we will be staying home for New Year's Eve. I'm very grateful that I have not had to deal with COVID personally. But the news has been been so overwhelming at times, so I turned to old newspapers online for more interesting reading. I've found lots of trivial family news in the social columns of the past.

My Great Grandparents, Cicero and Allie Bell, were parents of a total of seven sons. Frank and G O (Oren) were sons of Cicero and his first wife. J W (Bill) Vickrey was Allie's son from her first marriage. In 1901 after both were widowed, they married and had Ben, Ed, Stanley and Virgil. About 1923, most of the family moved to Hamilton County, Nebraska from Jewell County, Kansas. Depending on the year, Oren, Bill and Virgil each may have had to drive in from out of state for family get-togethers.

We have had many family gatherings in the past where some people were unable to be there. Very often they were celebrating with the other side of their family. In this clipping from 1942 at Thanksgiving, it states "All joined in a prayer for those absent because of sickness, and for the boys in service." I'm thankful at least we're not at war right now. At the time of this dinner a few of the grandsons of Cicero and Allie were serving in WWII. Cicero was living in a nursing home, and Frank is not mentioned. Mr and Mrs Bill Dieckman are Ben's wife's parents. 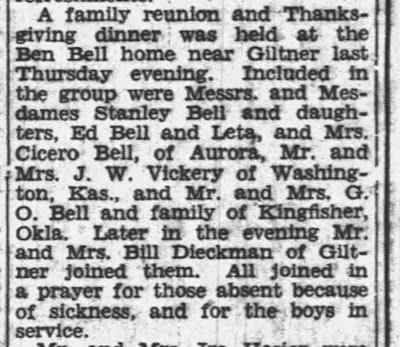 In 1943 the Bell family gathered for Christmas at the Grandparents home in Aurora. Two families weren't there, Oren's from Oklahoma and Bill's from Kansas. Cicero and Allie were blessed with 9 grandsons and 9 granddaughters. 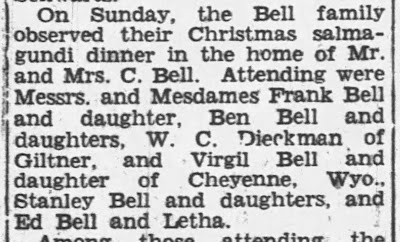 I admit I had to lookup "Salmagundi", and I believe these dinners were the type of the second definition, "a general mixture, a miscellaneous collection". I've been having salmagundi dinners all my life! How did such a great word get dethroned by "pot luck"?

This clipping says "all of her boys" but Bill, Frank and Oren weren't there. 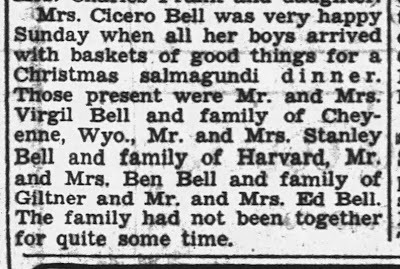 "Those things mean so much to a shutin." Can't we all relate to that this year! 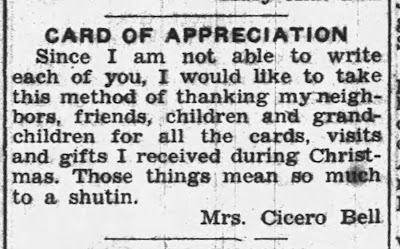 Aurora News-Register, January 13, 1950
This big family reunion with the families of Cicero Bell and his sister, Laura Alcorn must have been quite a production. I'll bet the instrumental number by my Mom and her sister was a clarinet and saxaphone duet. From the list of where everyone came from, it looks like Oren's family didn't make the trip from Oklahoma. 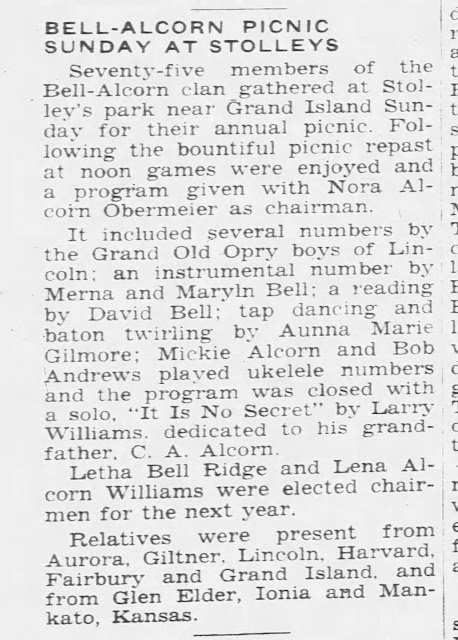 Aurora News-Register, September 11, 1955
For Christmas 1955, my Grandparents hosted dinner for Grandma's parents, brother and Uncle Bill. Not mentioned were my Mom and her sister and brothers. This would have been in the same farmhouse where I had my first several Christmas dinners with this family. Great Grandma McGrath and Uncle Bill Negley were gone before I came along, but Uncle Virgil was at all of our family events, often with his movie camera.

All of these events were before my time. I don't know if any of these people had a camera to take snapshots, but they would be priceless. These clippings are fund to read, but I think they are making me miss family even more.  When this pandemic is over I'm gonna host a big ole' salmagundi dinner!
Posted by Laura Mattingly at 5:00 PM