"The Secret of Better Health and Happiness is Keeping Busy"

For Mrs. Cicero Bell It Has Been A Good Year For Vegetables And Fruit

Mrs. Cicero Bell, though 83 years young, is one of Aurora's most enthusiastic gardeners, both in vegetables and fruit. And she always finds time to raise an abundance of pretty flowers.

This season it seems peach trees are synonymous to a peach crop, and here again Mrs. Bell is up with the best of them with a peach crop. She has seven or eight trees, some of which produced early peaches, others of the very large and choice variety were picked late last week and still other trees are standing with their broken limbs loaded with lucious fruit. The boys propped up many of the large limbs to the best of their ability but when those big main branches hang so loaded it is hard to do much about it. As a result one of the big trees has the two main limbs broken high in the tree. The peaches will finish ripening but this is the last crop one or more of the trees will have.

Mrs. Bell has harvested quite a crop, giving her sons several bushels. She sold the rest, after canning all she can use. The super large fruit, she doled out by the pound so that many of her friends might have a few. Your writer can vouch for their quality and size. They averaged about three-fourths pound each.

Peaches are only one of her crops this year. Early there were nice cherries and choice summer apples. She had a better than average crop of strawberries and raspberries.

Long a producer of fine tomatoes, Mrs. Bell put her plants out very early and as a result she picked bushels of choice tomatoes, which had matured well in advance of the extreme heat of late June. They are gone now but numerous Aurora housewives have these tomatoes canned for later use.

Mrs. Bell made numerous entries at the county fair, not only fresh fruit but several cans of fruits, vegetables and jellies. She relates that she received some prizes but she didn't know just how many.

In her pleasant little cottage at 1505-13th St., Mrs. Bell keeps busy and happy the year around. Along with taking care of the garden, she always has a variety of colorful annuals and perennials, as well as climbing vines.

When the winter season arrives, Mrs. Bell turns to other interests - handwork of many kinds. She is especially enthusiastic about braided and crocheted rugs. These occupy her time largely until its time to garden again.

A few years ago she had a severe and lenghtly illness, but she has over come this and finds the secret of better health and happiness in keeping busy. She has several sons and their wives in the community who keep a watchful and affectionate eye on "Mom". 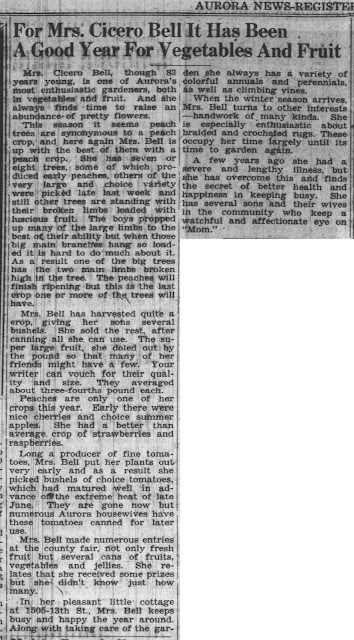 Posted by Laura Mattingly at 9:00 AM